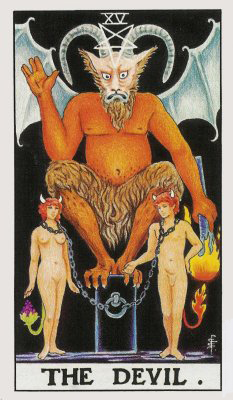 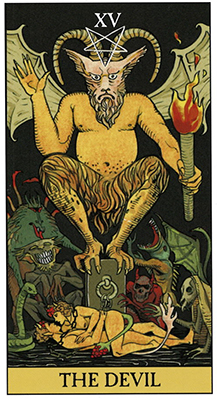 Lord of the Gates of Matter

The Devil Description and Symbolism

A devil looking creature is sitting on a black saturnian square. It is not a full cube, but a square, which indicates that much is hidden. His black saturnian box is chaining a man and a woman. The noose around the couples neck looks loose enough to take off, yet neither the man nor the woman seem inclined to remove their bondage. This gives the impression that they are there by their own free will.

Sensuous grapes grow from the woman’s tail, while the man’s tail is a grape leaf that is now in flames from the devil’s torch. The man and woman also have horns. It appears that the longer they stay with the Devil, the more they turn into creatures of darkness.

The devil has horns and bat wings. Half of his legs are covered with hair and his feet are claws. The way he is perched on the black box looks like a heart.

The Devil is fat. He loves to eat and indulge in anything that fulfills his immediate gratification. His face is in a scowl with a downward frown. Above his head is a drawing of the inverted pentagram. An inverted pentagram is the symbol for the devil.

The Devil is related to materialism. The Devil indicates being bound by things, stuff, and physicalities. You are unable to let them go. You maybe caught up in always wanting more indulgences and never thinking that you have enough.

But the Devil reminds you that the noose around your neck can easily be taken off.

The Devil in tarot can represent a gambling addiction that is out-of-control. Someone who steals and lies for their next gambling venture. Someone with risky behaviors that includes risky business ventures that are more precarious than grounded.

The Devil in tarot can represent obsessions, especially with materialism. You maybe obsessed with having all the new toys and gadgets. You are the person with the newest smart phone or fabulous luxury car. Your desire for more stuff is insatiable. If you live in the city, you also may like high views, such as a penthouse view over the city.

The Devil in tarot can represent any behavior that is uncontrollable. The Devil can even indicate someone who is hysterical or bipolar.

The Devil can sometimes suggest impotence in a man.

The Devil in Love

The Devil also indicates sexual interests such as bondage, bisexuality, and fetishes. In its darkest form the Devil can represent sexual slavery.

Lust is commonly confused for love as the Devil in love doesn’t understand real, pure compassion as a form of love. You may have an obsessive longing to be with your husband/wife/boyfriend/girlfriend and can’t stand to be apart from them. This is normally not a healthy relationship, but one that is fictionalized as romantic in many love stories written for the cinema. You may have to know every little thing about them and you disrespect their boundaries. Your fourth chakra, which rules the heart is most likely to be over enlarged. A person like this doesn’t believe love has boundaries and you may find them snooping around, following you to work to see if  you are being faithful or checking with past lovers for information about them. If you have a journal or diary, this person will read it trying to convince you that “love has no boundaries.” But love does have boundaries. Think of it like a cat. When your cat comes to you, the cat appreciates you more. When you are constantly picking up the cat and hovering over the cat, the cat resists you more and more. Cats need boundaries and so do people.

If you are asking about a love interests feelings then this person maybe obsessed with you in a negative way. They must have you at all costs. They may even be thinking about you in a lewd, degrading way. They may think of you as an object.

In a relationship they may expect lavish and expensive gifts. The Devil can indicate the type of woman who only dates affluent, wealthy men and immediately writes off poor men. The same holds true for men. A man who only dates super models. Someone like Larry King or Donald Trump who is always “trading up” for a younger version of his wife. According to the Devil, love is for the weak.

The Devil card can come up for men who degrade and objectify women. Sexual obsession and rape can be suggested by the Devil.

The Devil in tarot can come up to represent sexual temptations, such as a married spouse feeling tempted by someone who has vices. Jessica Rabbit would be a good example of a woman who uses the Devil to get what she wants out of men.

When the Devil comes up in the “feelings” position it can indicate a few things depending on who you are inquiring about. If you are asking about a love interest or boyfriend/girlfriend then the possibility that they are obsessed is most likely probable. They are so blinded by lust, temptation and the outward “you” that they can’t see anything else clearly.

If the Devil falls into a placement about feelings about an acquaintance, friend or colleague there is a possibility that they feel a little scared. Fear tinged with obsession would be highly likely. They have some strange infatuation or fatal attraction or Single White Female (movie) thing going on. They can’t seem to get you out of their head. I would be worried if the Devil came up in a placement about feelings for a friend or colleague.

Devil as a Strength

There are positive aspects to the Devil. No doubt, the Devil is all about materialism and matter. Anything that is physical can fall under the Devils reign. We need the physical Earth because we are physical beings.

In a romantic reading, the Devil as a Strength can indicate a contract or pact that has been made with someone. You may not even be aware of this pact because it happened in a past life or before you entered this body. The pact could even be the manifestation of mental activity grounding into the material. There is a major life lesson to be learned from this person. That is the strength of the Devil if it falls in this position in a love reading.

The Devil as an External Factor or Outside Influence

An external factor is out of your control. It is what is going on around you, so it usually has to do with someone else’s impression.

Someone is missing the mark and they see things incorrectly regarding you. The person around you could be afraid of an aspect of yourself that you have shown to them. It could be a very simple misunderstanding, but the other person sees it as detrimental. They are living through the Devil and have completely lost the L part of L.V.X.

This is a shame. I had this card come up once in my own relationship reading. The Devil was the external factor. I realized that the man in question was afraid of me and misunderstood what I said in regard to tantric sex. I merely asked him to be receptive so that I could put him into an altered state of consciousness. Once in an altered state of consciousness, we could work with his sexual energy so that he didn’t cum within 3 minutes of getting aroused. The poor man was so afraid (he already had some questions about my “religion,”) that I never heard back from him!

This would be a good time to think about something that might frighten someone because they do not understand it. When we remove to L from LVX we are left with an inverted VX=XV (15). Add that L back in and we have “love”, but what we really have is the Hebrew letter Lamed. One meaning of Lamed is education. If you are not educated then you won’t have all the necessary information to arrive at an informed decision. As a result, there will be a lack of understanding and the external factor will remain in darkness.

The Devil as an Obstacle

In a romantic context, the Devil does indicate an unhealthy need and obsession to be with someone. This could be impeding your way into a healthy relationship.

Any other vices could fall under the Devil as an obstacle: Gambling, risky behavior, and even dark magic.

All of these ideas should be looked at closely. If you are in a job that you don’t like or that isn’t working you to your full potential, branch out and do what you love. Have unwavering faith in yourself. The same goes for a relationship. If you are in a relationship, you may not be seeing what is real, but what you want to see, thus resulting in an obstacle.

All of these are solvable obstacles. There isn’t any reason other than your own self-denial that prevents you from freeing your mind and thus your life.

The Devil as Advice

Be careful while signing contracts. “The devil is in the details,” is the phrase that comes to mind.

The Reversed Devil can mean one of two things. You can realize that you don’t want to be chained to a vice, a blood sucking corporate job or a draining relationship and release the cords.

The other side of the Reversed Devil emphasizes that the chains are chocking you, but you are unaware of it. The Reversed Devil suggests a very immature soul, who will hurt anyone to get to the top. They play the game of life like some “House of Cards” board game, unaware or insensitive to the damage it does to other people. This person could very well be a psychopath and a sociopath.

Due to the nature of universal laws, this person will finally see their retribution play out, most likely in the final stages of their life. This kind of person usually works very hard for money and power, who winds up later in life, homeless, poor, ugly and miserable. This sort of fate can translate into a new life (if you believe in reincarnation).

Devil and the Sun:

a. Understanding why you are here on Earth.

b. Understanding that in order to be free you have to face the Devil as a positive aspect in yourself and all humanity.

c. Feeling the sun on your face is why you are here on Earth.

d. Knowing without words (which is why this combo is hard to explain!)

a. Returning to something unhealthy

Devil and 2 of Wands:

a. Being stuck in a business relationship that brings status, money and success, but little spiritual fulfillment

b. No matter how hard you try to distance yourself from your disfunctional family, they are always there.

Devil and Eight of Swords:

Devil and Queen of Swords:

a. The strong woman breaks the devil’s cords (This combo came up with the Devil on top and the Queen of Swords  on the bottom. Literally looks like the Queen is sticking her sword up to break those chains)

b. The injections (sword) breaks down the bacteria/virus.

Devil and the 6 of Cups:

a. Being bound to an unpleasant situation with your children. Someone acting in a very obsessive, even repeatitive behavior.

Devil and 7 of Cups:

a. Addicted to drugs

Devil and Knight of Cups:

a. Addicted to love

Devil and 2 of Pentacles:

b. Seeing the humor when no one else does