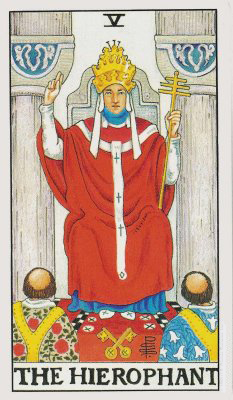 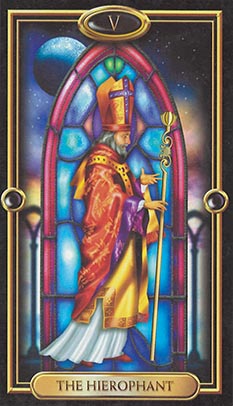 Magus of the Eternal Gods

The Hierophant wears a red robe, which symbolizes passion and domination. He is passionate about what he teaches his two disciples, but he also dominates them. Red is also the color with the smallest wavelength and the lowest chakra. It suggests he is in touch with the earthly domain. This color red in tarot usually expresses cultivated desire. Underneath the gown he has a white shirt. This suggests purity and wisdom. He is pure in his beliefs and sometimes to a fault.

His one hand points up to the sky, which receives God and the other holds a golden staff with three crosses on it. The golden staff mimics the gigantic crown that the Hierophant wears. There are 15 trefoils on his crown in rows of three. Underneath his crown he wears yokes that cover his ears. This suggests the element of hearing in the hierophant, but it is not a regular voice that he hears, but the divine voice of the One supreme.

The crosses on the feet of the hierophant and on either side of his feet represent the union of male and female energies. The two keys are also crosses which represent male consciousness and female subconsciousness.

The disciples cannot get into the place where the Hierophant sits without going through all the rituals and teachings. This is a place where only people who study hard are allowed to enter. It is a guarded place, but through hard work, ritual, and listening to him without question, the monks can enter.

There are two monks who knell in front of the Hierophant. One is wearing a gown made of red roses and the other wearing a gown of blue lilies. Roses and lilies are symbolic of the physical and mental/astral world. We bring both of them together when we see the combination in tarot. The two monks also represent their subservience to the teacher.  Combined with the duality of the roses and lilies, they can also represent two paths that a person can follow: religious vs. spiritual, academic vs. athletic, etc. The yellow yokes that the monks wear represent a yoke that ties them to a higher level of understanding.

The Hebrew letter of Vau relates back to the knights in the lesser arcana. Think of the monks as the Vau, or as the knights setting out on a quest for the truth.

He is ruled by Taurus, who is well grounded and rooted in tradition. If you look closely you can see the symbol of Taurus in his stone chair.  These are the pillars and roots that do not change. They stay constant. He rules over tradition and conventional beliefs. He brings discipline to social order.

He stands for group order and society. He can represent any group in society that feeds people social order. This kind of order is needed in order for society to function. Whether or not it is functioning at its maximum capacity is another question.

He stands for education, mentoring, and teachers. This person can initiate you into the group, whether it be a softball team, a church, or a school. Team work is highlighted.

He is all about doing the “right thing.” The right thing is the thing that is the most common. This will feel natural for many people because it’s a program that has been given to the majority of people through mass media, religious institutes and parents and teachers.

The right thing or right voice can also be depicted as listening closely to the One Voice in our mind that comes directly from the One Indivisible God. Astral chatter or “channeling” is not the One Voice. This One Voice doesn’t have a real voice. It’s a feeling or a presence that speaks in telepathic communication to you. It does not make promises of power or dominion over anyone else. Those voices are often confused for a divine voice. The Hierophant is the go-to guy/card for listening, quietly in meditation to the “right” voice.

The Hierophant in Love

The Hierophant tells us to do what is told of you. The Hierophant is one the marriage cards, especially the card of arranged marriage and marriages of conveniences. I’ve gotten this card in regard to marriage for individuals who marry not because of true love, but because the individual feels pressure from the group to marry. You may feel under pressure to marry because “everyone else is doing it.”  It’s the card of conventional marriage. Big weddings can also be depicted (while Key 11, Justice, when referring to marriage, can indicate a marriage by the court or Justice of the Peace).

The Hierophant can sometimes relate a marriage or relationship where one partner is significantly older than the other person. This is especially true if the Emperor comes up along side the Hierophant.

Along side the High Priestess, it can indicate a love that has telepathic communication. You know how and what each other are thinking and feeling without having to use words.

The Hierophant is a deeper card than what appears on the surface. The Vau is the hook or nail that ties everything together. It’s the word “and”. (You “and” me. ) So look more carefully at the picture. We see three characters. You are you in that relationship?

The Hierophant for Feelings

If you are inquiring into a future lover or want to know what your love interest feels for you, the Hierophant can sometimes lead to disappointment. It depends on the context of who you are asking about. If you are asking about a relationship that you know cannot work within the realm of societal standards, then the relationship will not flourish. For instance, if you are asking if your professor has feelings for you because you can feel the chemistry, know that your professor most likely does have feelings for you, but will never act on them because he or she will not break the societal rules of teachers dating students.

If you are asking about how your current partner feelings, know that they love you very deeply and it is a love that cannot be unbroken. It is one that is bound by all that is material and all that is nonphysical, for they are really one in the same.

The Hierophant as an External Factor

An external factor means the situation doesn’t necessarily directly involve you, though it could indirectly involve you. The Hierophant as an external factor indicates that a teacher could come into your life or have an influence on someone around you. This could be anyone who teaches from the elementary level up to the doctorate program at the university. Taken literally, this teacher could show up in the form of a priest, clergy or rabbi. Whoever they are will impact your life as a mediating event that will bring a lot of relief and hope.

The Hierophant as Advice

The Hierophant suggest meditation of some kind. You may need to meditate a situation and bring together two opposites.

It also suggests that you meditate and listen to the One Voice for guidance. Only you can decide your own fate. As my friend Les told me, “Everyone has a holy guardian angel, but it’s the same holy guardian angel for everyone. That’s what the Hierophant is telling you. To listen quietly to your own true self or your own holy guardian angel. The angel is here to help you.”

My personal advice for the Hierophant comes from my mother. My mother is the person who opened the door to tarot and the astral world. Spirits dominated our house growing up. Door would always shut and doorknobs turn. Voices and whispers could actually be heard. I could see them as dark creatures that would appear as shadows. She would tell me, “Don’t worry about them. Just tell them to go away.” And it is true. If you want a spirit to go away that is bothering you just say out loud in your most firm voice, “Go away.”

But….It was also from her that I learned a more important message: that some of these entities tell her that she has great “power” and claim to know secrets that can help her have power over people.

I had to learn the hard way that she was wrong and these entities are not just some harmless source of “power”, but actual evil astral creatures that thrive on chaos and ruin. They tempt you by telling you that you have some kind of magical “power”, giving you that power and then laughing when you mess things up.

I am grateful that she made the mistakes that I could learn from (though she doesn’t see it that way). Anytime I am tempted by annoying astral beings, I take out my Hierophant card and the advice is always the same: Only through hard work, dedication, meditation and resolve can we find the Truth. No one is just granted “power” without hard work and everyone must begin at the beginning. You cannot skip lessons. Imagine if you placed a 1st grade student in a 6th grade class. So imagine the same thing of tarot. You cannot begin to understand it’s depth right away. Start slowly and methodically. Remember that you are never really the Hierophant and that you are always a monk because do you ever really stop learning? Do not listen to “voices” or charlatans promising you tarot courses that you can learn in one week.

If you are a beginning student of the occult and find yourself gravitating towards channeling videos on youtube, know that no one but you has the power you need and want. God does not speak directly in words. God does not tempt you with power. The Hierophant as advice is telling you to back away from any source that doesn’t feel right.

On a mundane level of advice, the Hierophant begs the advice of being a good listener.

The Hierophant On a Mundane Level

The Hierophant can indicate schools, libraries and government offices and bureaus. You might be finishing a degree at the university or starting a new job in a corporate office.

The Hierophant in Career

You might need training in another field in order to get the job you really wish. The Hierophant symbolizes universities and colleges. You may consider going back to school or taking a few specialized classes. When the Hierophant comes up in a career reading the advice maybe to get a mentor or a job in a large and established corporation.

The Hierophant reversed can indicate that the inner voice is blocked. Someone is a know-it-all and extremely rigid in their thinking. This is the type of person who might be a fundamentalist (of any religion). They may believe the word of god is written in only one book without any regard to another point of view. An extremist on any level. It could even be an extreme boss or teacher.

The Hierophant reversed can also indicate protesting against conventional norms. It can be about questioning any establishment, but again, because it is reversed you will not be able to hear the right answer. Once it’s upright, you can actual see the truth about this card. It is not exactly about the church. That is the exoteric meaning.

It could also indicate learning disabilities, but I might want to see another card to support this such as a Page.

Hierophant rules the throat, ears and nose, so as reversal it could indicate health problems in that area. But you would also need to see supporting cards and I would be careful reading health if you are just beginning tarot.