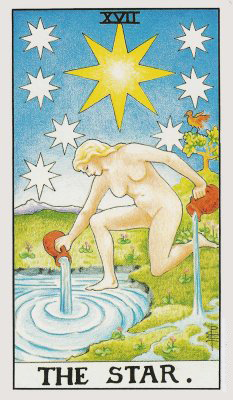 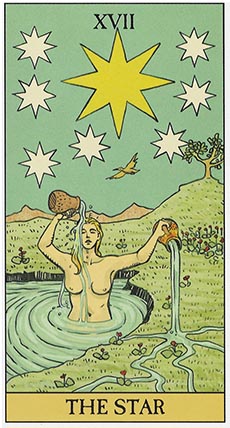 The Daughters of the Firmament

The Star as a Person: You Tube Video

The Star Description and Symbolism

A woman appears to be bathing naked in a small pool of water. Perhaps she was bathing in the starlight and is pouring back the unused water. She only takes what she needs. She’s so comfortable with herself that she doesn’t need clothing. Naked bodies in tarot symbolizes truth.

Her one foot is resting on top of the water, which represents Jesus walking on water. She is practicing the making of miracles. Water in tarot is symbolic of subconscious. She is able to stabilize herself through meditation. It is also an act of being able to merge both worlds of subconscious and conscious in order to obtain superconscious enlightenment.

The red ibis in the background perches itself on the tree of life. Ibis’s are known for their tenacity to weather any storm and they are sacred to many ancient cultures. According to the Ancient Egyptians and Ancient Greeks, an Ibis is a revered animal to the God Thoth (Egypt) and Hermes (Greek), who was the god of meditation, wisdom, magic and the moon. In tarot, red is the color of desire and manifestation.

Any bird is symbolic of transcendental experiences, mediums, psychics and someone who can go between worlds. In the Qu’ran, the word bird is interchangeable to the word “fate.” In Ancient Greek, the word for bird has the same meaning as “omen.”

She pours a pitcher of water into the small pond and the other pitcher on to the earth. The pitcher being put on the earth represents the material world, while the pitcher going back into the water represents our spiritual world. In this way, the Star is the bridge between both worlds.

There is a small mountain in the background, which appears to be far away. It tells us that the mountains are slow moving, but ever changing. The mountain and the stars are far away, reminding us that there is a distant possibility of having a miraculous wish granted.

The large star represents solar consciousness, while the remaining seven stars are part of the chakra system. There are 8 stars representing the break down of 17 (1+7=8).

The Star Interpretation and Divination

Possibility: The possibility is there, so whatever the you wish, will come true, possibly. Most likely. But it is a faraway possibility, just like the stars.

The Star is full of hope. You can be your best self, so take the initiative and run with it. There are spiritual guides and angels helping you at this time.

The Star tells us that everything that is meant to be, will come into being.

In future positions, the Star indicates that your life is about to reconnect and change. You can be the best you can be now. You can face the world just as you are and not how other people think you should be. You have a lot of intuition at this time. You should use it. This is your guidance from within. Be your own guiding star.

The Star recommends that you release emotions and not allow them to overpower you. The Star comes after the Tower when all the lies and misfortune came crashing down. The woman in the picture is naked. She doesn’t need the walls or clothing of the Tower. She realizes that she is perfect just the way she is. You may have gone through a period of darkness (Tower), but now the light is shining on you.

The Star indicates creativity in the arts. The Star inspires you to write the greatest novel or write glorious songs.

The Star in Love

The Star could indicate star-crossed lovers or a love that is written in the stars.

If you are asking about a reconciliation with an ex, then the Star urges you to heal and move on.

If you are asking about a potential love interest, the star is a good sign, but you may have to wait a little bit. The Star indicates the patience. Don’t give up hope.

If you are asking about your current spouse then you are loved and have the perfect relationship. You have a soul mate connection and connect on a spiritual level.

If you are asking about how someone feels about you, then the Star means that they like you, but think you are out of their league or our of their reach.

If admiring you from afar, they definitely think you might be the perfect person.

If you are male, this is your dream girl.

Star as an Obstacle or Crossing Card

As an obstacle, the Star is saying that you could be putting too much faith into something you have been wishing for. Something maybe just out of your reach. Money or inheritances could rightfully be yours, but you can’t get to them.

Maybe there is a man (or woman) in your office that you daydream about being with, but they don’t seem interested. You don’t make that move on them and they never do either. Instead, you just dream about them and have wishful thinking.

These types of thoughts aren’t going to get you your dream lover nor are they going to get you that money. And as an obstacle, it sadly doesn’t predict whether or not you will get those things. It only says, “it’s possible….”

Star as an Action

The Star as an action might mean to reach out and help other people.

If you are creative, the Star as an action might mean to compose a piece of music or draw some artwork that inspires others.

Don’t take the advice of the Star card lightly! The Star as advice calls for taking care of your health. You should rest, rejuvenate, take a hot bath or go to the spa. Tarot is advising that you need to rest and recuperate so that you can be your best another day.

The Star Reversed indicates low self-esteem. You may not feel very beautiful and have a hard time accepting compliments.

You may have unrealistic ideas about things and have built fantasies that are unattainable.

a. She connects with someone else who has a spiritual trajectory.

b. Talking with people about all the spiritual information she has.

c. This woman is connected to the spirit world. She comes from the Stars to help here on Earth.

d. Realizing your divine purpose on Earth comes from the Stars

The Star and Death:

a. Let go of the possibility

The Star and Queen of Wands:

a. She wants to look her best so she goes to the spa or medispa.

The Star and Ace of Cups:

a. Going to the movies

The Star and 6 of Pentacles:

a. He puts you on a pedestal.

Star and 7 of Pentacles:

a. Unable to heal from possible drug or sexual temptations.