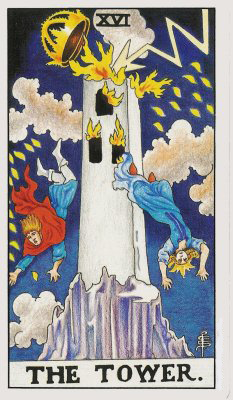 Lord of the Hosts of the Mighty

The Tower Description and Symbolism

A tower with a crown on the top reaches for the sky. The crown reminds us that this is a royal tower. It looks like the tower was built into a rocky mountain, which indicates they wanted to conquer nature. “Man vs. Nature”.

Unfortunately, the tower is on fire from a bolt of lightening (nature). The crown is blown off the top. Smoke is in the sky. There are 21 yods that look like mini flames in the sky. The king and queen are tossed out of the tower and are falling.

The Tower Interpretation and Divination

The Tower is the biggest sign of total destruction. Usually this is unexpected destruction of existing structures.

The tower usually means that something in your life will suddenly change. Things will be destructive. There will be an overhaul of everything you knew. Whatever it is, it won’t be pleasant, but will be necessary. Jobs could suddenly be lost or stocks could plummet. You could even find your lover in bed with another person. There is a force in nature that shakes things up from time to time, and the tower signifies this. But these things must tumble if you are to rebuild. Previous belief systems and existing structures must fall.

It could also signify something like a giant awakening. You could experience a spiritually moving event soon. Like lightening it could come out of the blue. You might feel like you had false beliefs that are now dissolving. Expected unexpected changes.

The Tower cautions against being strong with words. Watch what you say. Do you use words as swords? Have you ever? Maybe those that you’ve wronged will come back to give to you what you have given to them.

The Tower indicates shoddy building developers and buildings that aren’t constructed well. It could indicate that the building was built in a hurry without watching for details.

The Tower can indicate sudden death such as a car accident, plane crash, or war. The Tower could indicate someone who dies too soon such as Heath Ledger or Marilyn Monroe.

The Tower is symbolic of building castles so high no expectation will ever realistically reach them. You maybe fantasizing about how great things could be only to find that they weren’t as great as you thought they were going to be.

As a world prediction, the Tower could indicate terrorist attacks or a bombing of some kind.

The Tower as a Person

As a person who gets the Tower tarot card could be motivated by a cosmic force. This person is good with words. Sometimes these words come from the divine.

You are here on earth for a particular mission, but that mission is for you to find out on your own at the right time. It will hit you out of nowhere and you’ll have a major “ah-ha” moment.

The Tower in Love

If in a relationship, the Tower can represent the end of the relationship. You may catch you partner in bed with another person or find out something that breaks the relationship apart. It can indicate a relationship that is not built on solid ground. It’s a breakup that usually comes without warning and it is unexpected.

The Tower as Feelings

The Tower as Advice

Lies have been built around a situation. Don’t be fooled. The Tower advises you to dig around and find out the truth. Maybe you started dating someone who is married. Go ahead and google their name. Find out the truth.

An example that happened to me: You could also have been sold a bad car (called a Lemon). You have the right to legal and monetary compensation. Dig deep and stand your ground. Expose the truth of the situation and let them know where you stand.

The Tower on a Mundane Level

The Tower can indicate severe weather with lightening. It can also foretell being evicted from your home.

The Tower as an Outcome

When the Tower card pops up as an outcome to a situation, you have to take into account what the situation is and how you feel about the situation.

If you are single and feel that you will never find love, the Tower indicates a surprise. You will be surprised by something that you didn’t think would happen.

On the other hand, if you are single and believe in fairy tales, the Tower may indicate that your dream person will not show up. You may need to find someone else or give other people a chance.

If you are in a relationship, the Tower indicates a divorce or exposing the truth to a situation.

If the Tower is reversed it can indicate someone who is brutal and hurtful with words. Someone who fights unnecessarily. Someone who is on some kind of inner crusade not knowing that they are doing more harm than damage. A Christian crusader or an Islamic terrorist are two personae that could be indicated by the Tower reversed.

In a love reading, the Tower reversed suggests that your relationship was built on false believes that you continue to believe to the determent of your spiritual self. The relationship is essentially over, but neither want to realize it or come to terms with it.

b. Estate, probate and will planning

a. The realization that leads to change.

Tower and any Ace:

a. Something really good comes after a shocking situation.

b. Loosing something only to gain something even better.

Tower and Four of Swords:

a. Something unexpected happens that causes you to break up – and it’s a relief.

Tower and 6 of Swords:

a. It could signal travel to countries where you get lost and don’t know the language.

Tower and Page of Swords:

a. Sending someone a message to uncover the truth, which may start the crumbling of all the lies.

b. You know there are a foundation of lies and you investigate to find the truth.

c. Spying that could topple everything and everyone, but your quest to find the truth is overwhelming.

d. Being defensive about someone trying to investigate.

Tower and Knight of Swords:

a. Can indicate a warrior or the blowing up of a building. War is indicated.

Tower and 4 of Cups:

a. To your surprise, after you pack a large cart full of goods, your credit card is rejected at the store.

Tower and 9 of Cups:

a. Being pleasantly surprised with meeting a love interest that you and previously dismissed (It hits you like a bolt of lightening out of the blue).

Tower and Page of Cups:

a. Building illusions in the sky that crumble.

b. A very unstable foundation from someone who will never change. They are content to sit around and believe all their lies. Be careful because you need to keep reality in check before you have serious mental health problems.

Tower and 10 of Pentacles:

a. A relationship that is not built on love and emotional fulfillment, but built on security and money. At some point and slowly, the relationship hurts the people involved. Divorce will be probable.