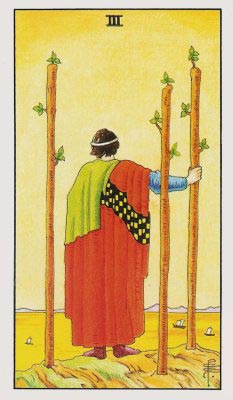 Lord of the Established Strength

Three of Wands Description and Symbolism

The man standing next to three sturdy wands is looking out at the sea. He can see his ships starting their journey and now must wait for their return (Four of Wands). His multicolored coat reflects the embodiment of all the colors. Red for action and passion. Green for nurturing and growth. Blue for communication. The yellow and black checks for a race.

The sky and sea are both yellow, which represents optimism and intellect. A lot of intellectual movement is involved with the Three of Wands.

His back is turned to us representing that all the work you have just done is in the past. You are waiting for the promise of the ships carrying your cargo. You have done all the work required for the boats travel. These ships are both setting out to reach goals, already in action and boats coming home after a goal set voyage. This suggests trade, merchandise and commerce.

The three boats represent a trinity. They could be whatever you deem important such as mind, body, spirit or Father, Mother, child. Any triad that is relevant to the reading.

Three of Wands Interpretation and Divination

When the Three of Wands arrives in your reading, there is an element of caution. You’ve put in a lot of hard work and are now waiting for a return on your investment. But those ships haven’t docked yet. The rewards are still uncertain.

The Three of Wands signals a time of taking something to another level. You have made the decision to work at something and now are waiting to see the results.

The Three of Wands indicates that all things seem new and possible. Your hard work looks like it could return a nice reward.  This is a period of clarity and concentration.

The Three of Wands indicates a waiting period after you’ve put in a lot of work. Look at the sea and meditate on your next step you need to take. All things come in time to those who wait and are patient.

The Three of Wands indicates traveling to far off distance places. Some of your business could be overseas.

You desire a partnership or union to form and are actively seeking it.

Three of Wands in Love

The Three of Wands in love can be about a proposal to take the relationship to another level. Now that you have asked, you are waiting for the reply. You may have put in a lot of effort into a relationship and now would like to see some rewards.

The Three of Wands can also indicate that another party is involved in your relationship. Someone maybe waiting for something better to come along or waiting for someone to come back to you. Your boyfriend or girlfriend is physically with you, but thinking and longing for someone else.

The Three of Wands can also indicate that someone is planning on leaving you behind. This could be a husband who travels a lot and leaves his wife at home.

Three of Wands as Feelings

You are feeling a little bit like actively waiting. You have mixed emotions about someone or something. You could even be feeling slightly anxious about which way to go. You could be feeling apprehensive about something or someone. You are cautious and observing things from all sides. You are reassessing your identity.

Three of Wands as Advice

Toss aside anything that is not aligned with exactly what you want. Think seriously about any partnership that you want to get involved with because it might not be for your higher good.

Any constructive ideas will return a profit or benefit you in the long term, so focus on what is concretely beneficial for you. Put trust in your ideas and put forth positive effort and energy.

Three of Wands in Career

The money that you are expecting will come. You’ve worked hard to achieve your goals and soon you will reap the rewards.

You don’t have to wait any longer, your ships are coming home. You have incubated and passed through the gestation period. You are now the proud owner of a new business or new creative project.

The Three of Wands indicates business activities usually between more than two people.

The Three of Wands Reversed indicates delays and setbacks. There are frustrations with not being able to achieve your goals. Minimum wage jobs that don’t pay a living wage could keep you from realizing your potential and dreams.

In any reading, there are major frustrations and your feelings could be overwhelmed with doubts and anxieties about your uncertain future.

In love, The Three of Wands Reversed may indicate that you are frustrated waiting on someone who may never come. You are not allowing yourself to see the big picture. Maybe they just don’t love you.

The Three of Wands can also indicate homesickness, especially if you have been estranged from or living far from your family.

The Three of Wands reversed isn’t all that bad, but can definitely indicate waiting longer for something to arrive than anticipated whether that be a package in the mail, a lover, or money.

3 of Wands and Magician:

3 of Wands and the Hermit:

a. When prompted, he believes it’s easier to go at it alone.

b. The eccentric and strange man always turns out the best business ideas

a. Receiving plenty of emails and texts.

a. Now matter how much work you’ve put into this relationship, she has her eyes on a different prize.

b. Sometimes work requires you to travel to foreign lands

a. They will reject your proposal for something better

a. Putting in a tremendous amount of effort in the development and nurturement of your children, with the idea that they will be big returns for them, for you and for the rest of the world.

a. Waiting for all your options to arrive (many may not make it home).

3 of Wands and King of Cups:

a. Making emotional and intuitive business decisions works for you

3 of Wands and Ace of Pentacles:

a. Reaping the financial benefits of your hard work

b. Actively collecting money from work

3 of Wands and King of Pentacles:

a. Most if not all of your business prospects make money.

b. You have the patience and fortitude to see returns.

c. When it comes to business you have the Midas touch.