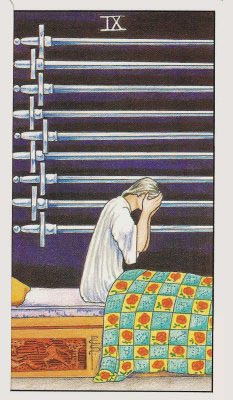 Lord of Despair and Cruelty

Nine of Swords Description and Symbolism

A man or woman wakes up in the middle of the night weeping. Her hair is gray and she cups her hands over her face. Her bedspread is an alternating checkered pattern. One square has red roses against a yellow background. The other square is blue with each square containing a pointillism of each one of the astrological signs. The yellow background suggests mental and intelligent thought, while the roses indicate desire. This suggests that she has created this energy around her (for more on creating desire see the Magician).  The other squares contain each one of the astrological signs, which indicate that her worries encompass the entire year. It is a full spectrum of grief and it has probably been ongoing for some time.

The bed she lays on has a wood etching of someone being slain by a sword. Nine swords lay above her head surrounded by the blackness of a starless night sky. Swords are the mental suit, so it makes sense that many swords are shown around her. She has created her own world and does not understand how to get out of it. We can see this by the fact that there are actually 10 swords in the picture and not nine. It’s over the top for sure and indicates that the problems are circular because the number 0 operates through the number 1. Nine is completion on a spiritual level, while 10 indicates completion on the physical. The Nine of Swords encompasses both aspects, but not in a positive way. There is only one way out of this situation and we find the clue to that in the repeating pattern of red roses. The red roses go back to the number 1 and the number 1 represents the master manifestor, the Magician. If she can re-cultivate her desire, she can release herself from her own imprisonment.

Nine of Swords Interpretation and Divination

The dreadful nightmare card creates a bleak picture of being completely trapped by your own self-induced nightmares. You may be in a situation that creates a great deal of stress.

The Nine of Swords can indicate depression whether it’s clinical depression or just ongoing grief. It is a time of sleepless nights while laying up and worrying. It is inconsolable grief and despair. You believe that things cannot get any worse.

The Nine of Swords can indicate a lot of weeping and crying. Any cause of grief and despair can cause the crying. The weeping and state of despair usually comes at night where you have the entire night to think about things that upset you.

The Nine of Swords is also called the nightmare card because it can be a card of nightmares and night terrors. A night terror is a nightmare that you cannot wake from. You are aware that it is a dream and so you keep telling yourself to wake up, but can’t move. The dream may also be going in slow motion where you don’t run fast enough to outwit the bad guys. There are major demonic undertones to the dream. You may physically sweat, waking up in a blanket of damp fear. Screaming and crying are common while dreaming.

Nine of Swords in Love

If you are in a relationship and the Nine of Swords turns up, your relationship maybe causing you a lot of suffering and worry. You could even be caught in a “bad romance.” Love can seem more like an insufferable disease that brings you down. There can be doubts in the relationship. One or both of you could also be mental disturbed.

If you are single and looking for love, the Nine of Swords signals extreme fear about getting hurt. You maybe manifesting the results through the power of your negative self-induced feelings.

Nine of Swords for Feelings

They think or feel that you are either a nightmare or in a situation that is a nightmare.

Nine of Swords as Advice

Something is bothering or worrying you, but you don’t know what it is or why. You may need to think over a part of your life that you feel is amiss. Bedded deep in your subconscious is where the issue lays. Your subconscious needs to be pulled up and into your conscious mind. This would be a good time to journal or talk to a close confidant.

On the other hand, you could know what is triggering the issue and it needs to be addressed head on. The issue could be with a lover, family member, friend or colleague. Give the issue some consideration and then try and have an open conversation. Explain that you would like to talk things out. Gauge the situation and decide what approach you want to use. The Mars in Gemini part of the Nine of Swords tells you that you can be aggressive about it verbally if you need be.

Nine of Swords on a Mundane Level

The Nine of Swords on a mundane level describes anything that has to do with beds, blinds, bedrooms, housing and home goods. Maybe you aren’t sleeping well because of that new mattress that you bought or perhaps the blinds aren’t dark enough and morning light wakes you up too early.

When the Nine of Swords becomes reversed things aren’t as bad as they seem and there is hope at the end of the tunnel of darkness you are experiencing. You could start seeking counseling for your depression or find a meet up group of like minded people to help you through this tough patch. The Nine of Swords Reversed indicates that you are slowly healing through tiny steps in the right direction.

Nine of Swords and High Priestess:

a. Not acting because of fear.

Nine of Swords and Chariot:

b. You’re in control of this dream.

Nine of Swords and Tower:

b. Trying to stay in control of a situation that doesn’t go the way you want.

Nine of Swords and the Moon:

a. Night terrors and night sweats.

a. Betrayal from a irreconcilable breakup keep you up at night.

Nine of Swords and Eight of Swords:

a. Obsessive nightmares that repeat over and over again.