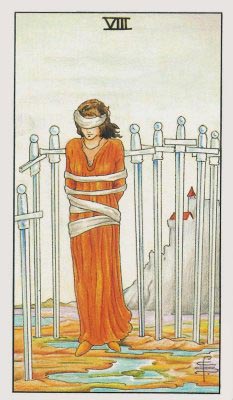 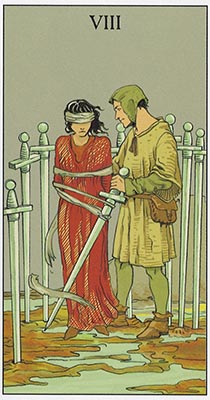 Eight of Swords Description and Symbolism

A woman is blindfolded and tied. Eight swords surround her. She looks helpless and hapless. In seeming ritualistic way, she looks bound and tied. Her red dress waves around her body as desire, yet she is unable to manifest. Water and earth mix together under her feet. Water is the subconscious and earth is grounded, material and real. Her subconscious fear could very well be rooted in reality.

She has a home in the distance, but has turned against it. The swords block her view and her blindfold hinders further sight. She has wandered a long way from where she believes her problems to be, but come so far only to realize how close her problems are. The more running she did, the more blind she became, until she stopped for a breath and paused between 8 swords of her own making.

The Eight of Swords can indicate anxiety. You might be stuck in a situation where you can’t seem to find your way out and this creates a lot of anxiety and tension. You are running something over and over and over again in your mind unable to free yourself from repetitive thoughts that do not serve your best interest.

The Eight of Swords can indicate confusion over a situation. You may not know where to go next or what your next move is going to be, so you remain trapped and immobilized.

The Eight of Swords can indicate a woman in a bad situation. Slander, libel and gossip surround her. She may be publicly disgraced. Gag orders and censorship are probably in order to curb the horrible effects.

The Eight of Swords can be insomnia or staying up very late due to something distressful. It could be drug addictions that keep you up late or obsessive thoughts.

The Eight of Swords can also indicate any kind of mental illness such as hypochondria and psychosomatic illness. Be careful what you think and how you think about things. You can create your own circumstances with your words and thoughts. For example, the universe does not negate sentences. When you say to yourself, “I am not going to get cancer because I am eating right.” All your body and cells hear is “I am getting cancer because I am eating right.”

So on the other hand if you want to prevent a disease know that you are immune from the disease and have the sense of knowing you are healthy. Just tell yourself something like, “I eat healthy because my body is a temple.”

I’ve known several people who worry over getting cancer. They obsessed over eating healthy foods, sunblock and being mindful, yet they still got cancer. It was my mother who brought this to my attention. She asked me why did Mrs. So and So get cancer when she was so healthy and preventative. I simply stated the natural law above, which makes perfect sense.

Here is another way of seeing the bigger picture. We are stuck on this tiny planet. All we know is what is around us from the earth to the sky. That is the world we live in. Now imagine that your cells in your body have a consciousness. All they know is you and your body because that is the world that they live in. Whatever the cells in your body feel or hear, the cells think, “There’s God speaking to us again. Did she says something about cancer?”

I am getting a little sidetracked, but I think this point is extremely important. I am using the cancer reference because cancer is one of the only diseases that the human body creates all on its own. It’s not a disease that we catch from an outside source. So I’m not suggesting that you go out and do reckless things like not get a malaria vaccination and then go to an African country over run with malaria and think naive positive thoughts like, “I’ll just tell my body I am immune.”

All eights in the minor arcana are related to the Strength card and the woman in Strength understands that evil does exist. That is why she is able to tame the lion, which is a mighty, fierce and carnal animal. You must believe that evil does exist and that you are not immune to its effects. Remember that one of the Devil’s oldest trick is to fool us into believing he doesn’t exist.

Eight of Swords in Love

If you are asking about a love interest, the Eight of Swords can indicate that it won’t be a good match. You may end up feeling anxious and worried.

Eight of Swords as Feelings

Someone is feeling confused, anxious and unable to move.

Eight of Swords as Advice

There are resources you can use at this time. Learn to find them. For some reason, there is unnecessary fear surrounding a situation. Think of the swords as your friends and they are there to help. No one is an island, nor are we ever completely alone, and there is always a dock for your boat.

The swords can help you realize there is always a way out when using the intellect and mind. The mind is a powerful tool and like the sword it is double edged. It can be used to trap you with anxiety and fear or it can be used to gain confidence, knowledge, insight, and wisdom. Try using your mind to change the way you feel, to gain new perspectives, and/or to evade an enemy.

The Eight of Swords reversed can indicate that you are finally letting go of the boundaries and restrictions that limited you. Someone else may have been limiting your scope and you finally realize that they are not in control of your destiny. Now you are in control.

Eight of Swords and Lovers:

a. Blind to the connection.

Eight of Swords and Ace of Swords:

a. Cutting away your anxiety.

Eight of Swords and Six of Swords:

a. Leaving an anxious situation.

b. Feeling anxious about taking a trip.

Eight of Swords and Two of Pentacles:

a. Indecision keeps you juggling variables.

Eight of Swords and Six of Pentacles:

a. Worrying about money.

b. Not feeling worthy of receiving.