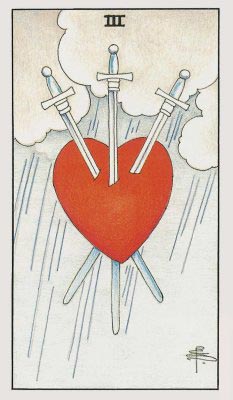 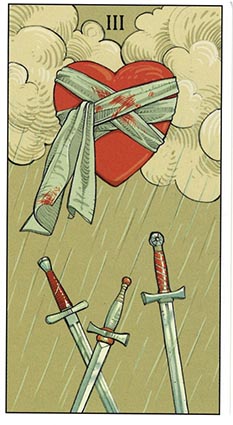 Three of Swords Description and Symbolism

Three Swords piercing a heart in the sky, which are surrounded by gray clouds and rain. The rain symbolizes crying.  Sometimes it’s necessary to release tears in order to feel better. The swords point downward, which could possibly signal grounding the energy. It also signals a very real and earthly feeling.

The Three of Swords picture is fairly straight forward. We see a heart with swords piercing it. It looks like a love triangle with the three swords, but it doesn’t necessarily mean that your heartbreak comes from a love triangle. The rain and gray clouds brings misery and pain.

The Three of Swords is ruled by Libra, the astrological sign of relationships, balance and harmony. Libra seek diplomatic and fair solutions for everyone involved. It’s why tarot card 11, Justice, is assigned to Libra. Venus rules over Libra, which is why we see the heart in the picture. It’s also why Libra’s can be very romantic.

In the Three of Swords, we see a heart being struck by three swords, which all look perfectly balanced. But something was out of alignment and Saturn, the planet of restrictions and boundaries came into say that it was time to seek the truth and restrict the heart from going any further. All life and all relationships generally come with pain. We tend to seek balance in relationships that are in progress. Even the most devoted couple needs to seek restrictions and balance. Sometimes it’s uncomfortable, and other times it’s very painful, but the end results will result in joy.

Three of Swords Interpretation and Divination

The Three of Swords is about sorrow. It’s a dreaded card. Someone is keeping a secret from you and you’re aware of it, but don’t want to realize it. Some dreadful piece of the puzzle is about to come out. Swords represent words (ideas/thoughts), so someone may tell you something that you don’t want to hear such as, “I don’t care about you. I don’t love you.” Someone is going to break your heart.

Two people were at a stalemate in the Two of Swords. The Three of Swords is the truth about to come out. Pain is part of the joy we experience. Without sorrow, we don’t really know joy. Sometimes we need the tears to help us feel better.

The Three of Swords can also come out of the blue. You aren’t expecting such an attack. Someone says something to you that hurts you to the core.

The Three of Swords can be about a struggle between the mind and the heart, hence the swords (words) piercing a heart. Perhaps you want to break up with someone because you know they are wrong for you, but your heart tells you otherwise. Perhaps you are ignoring your intuition (heart) because your mind (sword) is rationalizing. This may lead to a lot of hurt in your heart and soul.

The Three of Swords can also be quite literal. It can indicate surgery, especially open heart surgery. I had this card come up for a woman who lost her Mom to a heart attack.

The Three of Swords can also represent infertility. The Empress rules over the 3’s and she is the fertile Mother, while the Queen of Swords rules over the 2 and 3 of Swords. Combine these two women together and you get infertility. You could have a hard time conceiving and turn towards in-vitro fertilization. It can result in a lot of heartbreak and pain, but in the end, if you may end up with a baby and you will have your Empress moment. The Three of Swords can also symbolism miscarriages and the sorrow and grief that comes with it.

Three of Swords in Love

The Three of Swords can also be about a love triangle. There are most likely three people involved. Any time there is a love triangle, someone is bound to get hurt by it. All three people could end up suffering. Perhaps you have been having problems in your current relationship and fall instantly in love with someone else. You didn’t mean to fall in love with another, but you did. You rationalize everything in your mind (swords) and do not leave your spouse. You do not listen to your heart and you are hurt by your own decision. Not only are you hurt, but you hurt the other person and probably your spouse by keeping secrets from them or by not allowing the situation to run its course.

The Three of Swords in a relationship can foretell of a breakup. It is the sorrow that results from someone breaking your heart or you breaking someone else’s heart.

Three of Swords as Feelings

You are feeling sad, sorrowful, and disappointed.

Three of Swords as Advice

Another example could be parents sending their child off to college or a boarding school. It’s painful journey, but also joyful. But this step is a necessary journey that your child will have to take in order to grow into an adult.

As advice, the Three of Swords reminds you that sometime life is pain. Do not hide from the pain. Use a Libra approach and try and balance your emotions and counter them with a loving heart.

Tarot can also be very blunt. The Three of Swords maybe advising you to break up with someone.

The Three of Swords reversed can indicate that you are not addressing a love triangle properly. You could be caught in a love triangle, but are not doing anything about it.

Three of Swords and Fool:

a. Sorrow forges a new path.

b. He doesn’t care about heartbreak, he’s his own self.

Three of Swords and Strength:

a. Even though you don’t want things to end, you have the strength to end one relationship over the other.

Three of Swords and Hanged Man:

a. Sorrow brings the best ideas.

b. Sorrow and martydom.

Three of Swords and Temperance:

a. Chest pains from pharmaceuticals.

Three of Swords and Star:

a. Anorexia can cause heart problems.

Three of Swords and King of Cups:

a. The breakup doesn’t hurt emotionally.

Three of Swords and Two of Pentacles:

a. It hurts to have to decide between two things (or people).