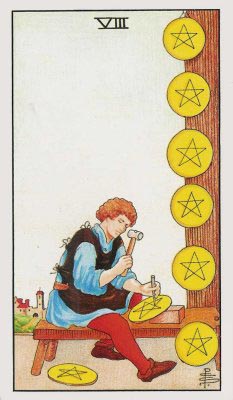 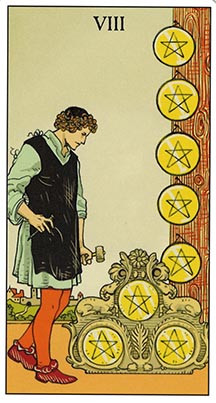 Eight of Pentacles Description and Symbolism

A man is pictured hammering away at eight pentacles. He has finished six coins and is working on the seventh one. The eighth pentacle lay waiting for him. His shirt is blue and the apron is distinctly tied into butterfly shapes. These represent thought and the power over the mind. There aren’t any clouds and barely any color in the sky. This reminds us that he if focused on his goals and that nothing distracts him.

There is a village in the background, which suggests that his family and home are far from his mind.

The 8 of Pentacle falls into the first decan of Virgo from September 28 until September 1. The Sun is in Virgo, bringing an added dose of clarity to Virgo. It could really be expressed as Mercury-Mercury, instead of Sun in Virgo. Mercury is the natural ruler of Virgo, and furthermore, Mercury is exalted in Virgo.

Virgos are known meticulous craftsmen at everything that they do and the man in the Eight of Pentacles is no exception. Anything that you want to do you will have the dedication, care and drive to make it perfect.

If your birthday falls on the 1st decan of Virgo, you are usually very studious, have a love of books and give time, thought and in-depth consideration to everything mental. Discernment is part of being a Virgo, but the Mercury-Mercury aspect of this card brings with it a more highly evolved perception. This is why the man is picture focusing so intently on his work. If you have a conversation with someone who falls into the first decan of Virgo, they will watch, listen and learn. They are attentively aware.

Eight of Pentacles Interpretation and Divination

Eight of Pentacles in Love

In love, the Eight of Pentacles can mean a few things:

There are no other people in this picture, but the man working diligently on his craft. The home is far away and a great deal of distance separates him from his home. You maybe spending too much time working and neglecting your home and family.

If you are single and can’t figure out why, maybe it is because you are spending too much time working to meet anyone new.

Eight of Pentacles as Feelings

The Eight of Pentacles isn’t a feeling card, per sea. In general, when someone asks how a loved one or love interest feels about them, it can indicate that they aren’t feeling anything right now about you. They are generally consumed with work.

If you are asking about feelings in general, such as “how does she feel about the job proposal, how did they feel about the letter, how does he feel about ….etc..” then there is a repetitive thinking and feelings. It doesn’t indicate what or how they are feeling. Again, a clarifying card might help, or to pull the card aside and meditate on it for a while.

Eight of Pentacles as Advice

If someone is making your life difficult, now is the time to cut ties with anyone who doesn’t serve your higher good. Don’t try and force an issue. This is not the right time to assert yourself.

Eight of Pentacles on a Mundane Level

The Eight of Pentacles could propose that you will be listening to one song over and over again.

Eight of Pentacles in Career

The Eight of Pentacles is a real career oriented card. You job is very important to you at this time. You are working hard to master your craft or trade. This card indicates working with your hands and with physical labor, but it can summarize any job.

Great card to get if you are asking about your career especially the beginning of a career. This assures that if you put in the time and dedication to your line of work, you will succeed and prevail.

Eight of Pentacles as an Outcome

If you’ve been worried about work, you’ll find yourself pleasantly surprised by a good turn of events. These will be smaller successes.

An email or package will arrive on time and you’ll get an unexpected call from a visitor.

The Eight of Pentacles reversed indicates that you are unfocused and perform sloppy work. You could be cutting corners that end up making more money for you in the short term, but end up with devastating consequences in the long term. You will end up with goods or merchandise that isn’t quality and lose customers in the process.

The work effort in the Eight of Pentacles falls to the wayside when this card is reversed. You are sloppy, undedicated and may even do illegal things to get ahead. It indicates a poor work ethic and underhanded behavior.

In love, the Eight of Pentacles reversed can come up for a person who is commitment phobic.

Eight of Pentacles and Fool:
a. Steadily working on a new project

Eight of Pentacles and Lovers:
a. Contracts at work
b. Working with the one you love

Eight of Pentacles and Four of Cups:
a. Going to work instead of hanging out with friends.
b. Rejecting one job offer over another.

Eight of Pentacles and Seven of Pentacles:
a. Exercising and waiting for the results, which are never instant.

Eight of Pentacles and Page of Pentacles:
a. In a relationship context, this can indicate obsessive thinking that is heavily one-sided.