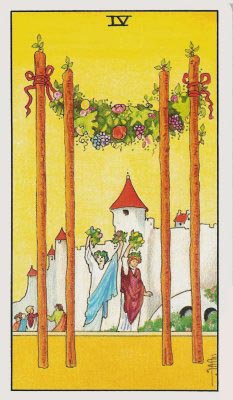 Four of Wands Description and Symbolism

Two women standing under a festive wedding canopy wave their bouquets of flowers high above their heads. The women look as if they are welcoming someone. There is a beautiful white stone castle behind them with other people talking and mingling in the background. The red cupola crowns the top of the castle creating a magical look.

Both the sky and pavement are yellow, which represent warmth and sunshine. They entire picture has a warm, caring feeling to it.

The Four of Wands is a joyful card that indicates weddings, community and celebrations.

The Four of Wands predicts traveling to a relaxing retreat or a house by the lake. It represents family, friends and good times. Sing-alongs at the camp fire and camping trips that bring people together are probable.

When the Four of Wands comes up in a reading, holiday and birthday parties are also probable. Any large ritualistic ceremonies such as batmitzahs, Quinceañera, and Sweet Sixteen’s.

The Four of Wands indicate career paths that include a party planner or a hostess.

You could be buying a new home or decoration/renovating your existing home. This could involve the expectation of a new baby.

Both Mars and Venus had a love affair. It may have been fiery and passionate, but their polar opposites of war and peace fused into an equilibrium.

The Four of Wands depicts such a scene, in which the Emperor and the Empress come together and collaborate. He brings in the structure and organization and she brings the beauty, arts and festivities.

Four of Wands in Love

If you are single, the Four of Wands is a welcoming sign that someone is coming to you. The Four of Wands can be about homecomings and welcoming parties. You may meet this person at a restaurant, a party or between friends.

If you are in a relationship, you could be taking it to another level. Weddings and anniversary parties are likely.

Four of Wands as a Feeling

Four of Wands as a Strength

The Four of Wands indicates stability of your home, family and friends. You may find great strength and stability in being able to rely on family and friends. This can indicate having a loving relationship with someone who is there for you and your children. The home, social engagements and the community are all things you can draw upon as a strength to help yourself.

Four of Wands on a Mundane Level

The Four of Wands can indicate meetings that take place in restaurants and city events.

Four of Wands and Strength:

a. She diplomatically makes sure everything is good at work/home/kids. She is stern, but not overbearing at home or work.

b. This lady gets things done for the party.

Four of Wands and Wheel of Fortune:

a. Amusement park ride with lots of roller coasters  b. Riding the Ferris Wheel at the county fair.

Four of Wands and the Devil:

a. The manipulative person always trying to find away into the house, the group or his/her life.

a. Evites to a party

b. Throwing together a party quickly

a.  An intimate wedding

b. Spending the night in with your family

4 of Wands and Queen of Pentacles:

a. The hostess with the mostess.