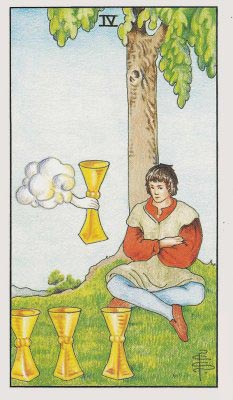 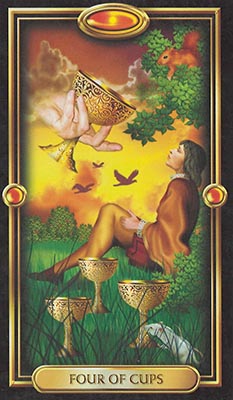 Four of Cups Description and Symbolism

A lone man sits under a tree with his arms folded on his chest. There are three cups in front of him, but he closes his eyes to them. A hand, similar to the hand in the aces, is reaching out to him from a small cloud. This is the golden yod of God reaching out to give the man more.

Moon in Cancer brings in a sense of moodiness and despondency that is needed. The Moon rules Cancer and is in its natural home in the Four of Cups, this means that the moon needs it’s time to make its cyclic journey. Emotions can be up and down and with that comes melancholy. Maybe there was too much of a good thing in the Three of Cups, so in the Four of Cups we need to have a time out to reflect on what is passing. Give yourself sometime to relax, meditate and reject those things which do not serve you anymore. It’s okay to go New Moon and disappear for a few days and like all cyclic this one is only temporary.

Four of Cups Interpretation and Divination

The Four of Cups often signals a refusal of some kind.

The Four of Cups can indicate someone making a hasty “no” decision without regard to thinking it through. The Four of Cups suggests that you should weigh all your options at this time.

On the other hand, the Four of Cups can indicate severe boredom and lack of interest that you will probably not regret. You could be on a date where you’d rather be doing almost anything else.

The Four of Cups suggests that you are depressed and perhaps too depressed to make good judgment calls. You may be missing good opportunities because you are so sad. This sadness maybe caused by outside forces that you have no control over.

Four of Cups in Love

If you are already in a relationship it can signal apathy and boredom. If you are asking about a potential love interest, then they will probably reject you.

Four of Cups as Feelings

The Four of Cups is all about feelings. Cancer can be very much affected by their moods, feelings and longing. In the Four of Cups, we have a man rejecting an offer. This suggests feelings of apathy, discontentment, feeling tired and probably turned off by whatever is in that cup.

Four of Cups as Advice

The advice for the Four of Cups is to take the hand. Someone is offering you help in some way, yet you feel apathetic about it. You don’t want to accept, but need to accept help. This card can often come up for someone who doesn’t accept the cup, but ends up regretting it. It’s a sad position to get in love readings because the person really should have taken the stability of the fourth cup. It was written in the stars. The Moon in Cancer is in its natural position, so this is a “meant to be phase” that a lot of people miss. My advice is to take the hand. Ignore the man looking away from the outstretched hand. He’s a fool because that’s the hand of god. That is your destiny. If this is advice in love, it would be wise to go out on one more date, you never know what could happen.

Four of Cups as an Obstacle or Crossing Card

The Four of Cups as an obstacle denotes emotional upheavals, depression and melancholia. You could be rejecting very good opportunities that you might not get again. Likewise, you could be rejecting a new beau who is good for you, but you can’t see through the cloud of sadness.

The Four of Cups as an obstacle denotes obsessions that are cyclical in nature. You could be obsessing over a former boyfriend or girlfriend. They probably don’t want you back, so you have to move on. You are refusing to move on from your past relationship. The cyclic Moon in Cancer element to the Four of Cups means that someone better will come along very soon.

When the Four of Cups Reverses itself, you may be getting your life back on track. You may be thinking about meeting new people because the old ones bore you. You may be coming out of a period of boredom and stagnation.

The Four of Cups Reversed can signify deeply psychic feelings that border on illusions. There could be a thin veil between the spirit world when you are lost in deep meditation and rituals. A lack of grounding is indicated.

Four of Cups and High Priestess:

a. Feeling pitiful and sad and writing about it.

Four of Cups and Moon:

a. Refusing to get caught up in the illusion of their relationship.

Four of Cups and Seven of Wands:

a. Refusing to fight.

Four of Cups and Four of Swords:

a. Taking a relationship break. It does not indicate it’s over, but that a time-out is needed.

Four of Cups and Nine of Swords:

a. Saying, “no more” to that nightmare.

Four of Cups and Ace of Cups:

a. Rejection of the heart.

Four of Cups and Two of Cups:

a. Being bored with the romantic bond.

Four of Cups and Nine of Cups:

Four of Cups and Knight of Cups:

a. No sex for you right now.

Four of Cups and Two of Pentacles:

a. Adults refusing to mingle at a children’s party. Lots of balloon animals being made.

Four of Cups and the Six of Pentacles:

a. You ask for money, but s/he refuses.

Four of Cups and Page of Pentacles:

a. Feeling apathetic, bored and rejecting the weak financial offer.