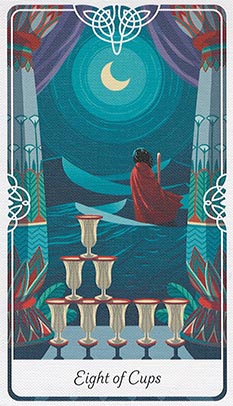 Yes or No Question: No

Eight of Cups Description and Symbolism

With his back facing us, a man is walking away from eight filled cups. There is a wandering bog of water and large green mountains covered with algae or moss. The water is not stagnate, it’s still moving and teaming with moss covered life. Its not dead and over, but it’s running its course. The man is right to wander away in search of fresher water or perhaps he wants to somehow bring fresh water back to the alcove. In any case, he is in search of something more.

We also have the cyclical eight as a numerical reference and also the waxing or waning crescent moon. This indicates longer cycles in our lives.

Eight of Cups Interpretation and Divination

The Eight of Cups may also indicate that you need to sober up. You have wasted your time on drinking, drugs, or people who are useless to you. You have realized that now, and turned your back on those artifices.

The Eight of Cups can also indicate travel, especially long travel plans. You may need to spend all summer vacationing in a foreign country. When you return you have developed better cultural skills and may have learned another language. The Eight of Cups suggests learning something new that you wouldn’t have if you stay.

Eight of Cups in Love

The Eight of Cups is one of the break up card. You may have realized that your relationship is not fulfilling. Instead of staying in an unhappy relationship you decide to move on and look for something else.

On the other hand, the number 8 can refer to someone who will eventually come back to you (or you to them). It’s similar to the Four of Swords as a break up card that indicates you just need time away, but the relationship isn’t over. But in the case of the Eight of Cups, this break away period can last several months or possibly years.

During a dinner one night, I gave a relationship reading to a couple who got the Eight of Cups in the past position. I asked, “Did you know each other before?” The woman exclaimed, “Yes, we knew each other in high school, but it didn’t work out and then 30 years later fate brought us back together.”

Though, please be warned! Just because you get the Eight of Cups and you do break up with your sweetheart, don’t just sit away waiting for him or her to come back. The journey you will need to transverse is just as important for your development.

Eight of Cups as Feelings

You are feeling empty inside despite the upright cups. You just aren’t getting enough out of your life or the situation that you are in. You feel like there maybe something more out there and you want to experience that or find it. You may feel like taking a quest to find your lost cups or the create new cups and emotionally fulfilling experiences.

So if you are asking, “How does X feel towards me?” and the Eight of Cups pops up, X is probably feeling like taking a break from the relationship. They also may feel like even though you match and complement each other there is a feeling that you or they need and want something that you aren’t getting emotionally. As a feeling the Eight of Cups indicates feeling barren, empty and a deep void that you cannot fill under the present circumstances.

You may also be feeling abandoned by someone you love. They might be the ones taking that long walk away from you.

Eight of Cups as an Obstacle

The Eight of Cups can bring up issues with abandonment. These issues should be looked at closely because they can hinder new relationships from blossoming. Perhaps you had a parent walk out on you as a child and have never been able to deal with the feeling that you aren’t good enough or you have the idea that all people eventually leave. You have lost your faith in human compassion. The upright cups remind you that not all is lost. Do not lose faith in people.

As an obstacle the Eight of Cups can indicate that you spend too much time walking away from all the good in your life and refuse to see it. You are always on some quest to find something new and fulfilling, while not realizing what is in front of you. Perhaps you have absolutely great friends and family, but you seem to think you can find better. You can’t possibly see the joy that they already give you.

Wanderlust taken to the extreme can be indicated when the Eight of Cups comes up as an obstacle. This might be especially relevant if the Fool comes up in the reading as well. You may run away from family obligations and travel the world, only to discover that what you left behind had joy and happiness in it.

In a romantic context, the Eight of Cups can indicate someone who runs from relationships. Once they develop feelings for someone, they run the other way afraid of getting hurt. Look for the Eight of Swords to confirm this.

Eight of Cups as Advice

The advice is very clear when the Eight of Cups presents itself in your reading. It indicates that there is something that needs to cut out of your life and the advice is to walk away completely from it. The good news is that whatever you are abandoning will lead to happier times and even a spiritual renewal or awakening.

Eight of Cups as an Outcome

I will illustrate a case example from a reading that I did where the Eight of Cups came up as the outcome.

I got this card in a reading for a very wealthy woman who felt miserable in her marriage. She didn’t exactly know why, since she had everything a person would want, right? She drove a nice car, entertained powerful friends, and had beautiful, well mannered children, but deep inside she was empty. Her husband never allowed her to make any real choices. She had to do exactly what he wanted from her at all times. When she complained about his relationship with his beautiful secretary and how many nights that they spent out at dinners he replied, “That’s my business. Don’t interfere with it. You’re ungrateful for everything that I have given you.”

She replied, “But I have no choice in the matter. I request that you get a new secretary. I’ll pick out the secretary and since the kids are in their teens now, I can be your secretary.” He told her in a smug tone, “You can’t handle a being a secretary. I need you here at the house to manage things. You have lots of choices. I let you pick out the movies we watch and I always eat what you serve for dinner.”

And with those words, she took her children, filed for divorced and moved back overseas to Europe where she was from.

When the Eight of Cups shows up reversed in your reading, you maybe returning to a relationship or situation that you previously walked away from.

The Eight of Cups reversed signals eating, joy, and fixing a situation that you once wanted to leave.

Eight of Cups and Eight of Wands:
a. Power walking.
b. Marathon (running/cycling/etc).

Eight of Cups and Ace of Cups:
a. Walking away from one love to find new love.

Eight of Cups and King of Cups:
a. Walking away from a relationship creates emotional stability in your life. It’s for the best.

Eight of Cups and Five of Swords:
a. Walking away from a fight.
b. You know if you stay, no one will win, so you decide to leave the scene before it escalates.

Eight of Cups and Six of Swords:
a. Indicates a major break up and move in the process.
b. Looking for a new place to live after or during a breakup.

Eight of Cups and Ten of Swords:
a. Walking away from a situation that is dead and over.
b. There is no turning back. It’s over.
c. Sometimes you fight the fact that it’s over, but it really is dead and over.

Eight of Cups and Five of Pentacles:
a. Eviction. Homelessness.

Eight of Cups and Seven of Pentacles:
a. Baking, cooking or gardening and needing to go out and find the needed ingredient.