The Six of Swords 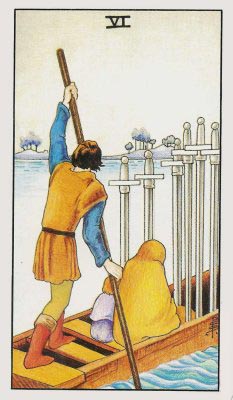 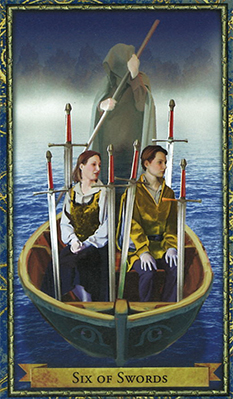 Six of Swords Description and Symbolism

Upon a still gray winter sky, a woman with a child are ferried in a boat rowed by a strong man. To the northwest the waters are calm, smooth and resemble glass. Next to them in the southeast a small portion of turbulent water sits beside them. There are six swords in the boat in front of them perhaps symbolizing that the issues you are trying to escape are still in front of you. The woman looks down refusing to see the swords. They still have not reached the other side, so their problems have not completely cleared.

Six of Swords Interpretation and Divination

When the Six of Swords comes up in a reading it can indicate that sometimes the best way to end an emotional situation is to move away from it. Times may have been emotional and rough, but you are slowly finding your way out of a difficult situation, to calmer waters, where you are less emotional and more logical. Perhaps a friend can row you in the right direction. Though, you may have to do this on your own.

The Six of Swords can indicate a catalyst for change. It can indicate that you have met someone that is about to cause profound change.

On rare occasions, the Six of Swords can also indicate death and funerals. This is because Mercury is the Greek God that carried the souls of the dead back and forth from the earth to the underworld. He was borrowed by the Romans and renamed Hermes.

Six of Swords in Love

If you are asking about a potential love interest, the Six of Swords is like the potential lover getting in the boat and leaving you behind. It may not work out. On the other hand, and if other cards support it, this person may act as a catalyst for a needed life change. Whether or not you end up together is another question.

If you are in a relationship, at its most mundane level it can indicate a well needed vacation. Perhaps you need some quality family time with the kids to heal and relax on the beach.

On the hand, if you are in a relationship and the Six of Swords comes up, you and your partner maybe having a few conflicts, which will soon resolve themselves with or without a vacation.

Six of Swords as Feelings

If you are asking how a love interest feels about you, then they probably feel like running away from you. They most likely aren’t interested in you. They (or you) feel weighted down and heavy with thoughts and emotions.

Six of Swords as Advice

The Six of Swords advises you to leave what isn’t working for something new. You may have fear because it is scary when you leave something familiar for something unfamiliar. Many people get stuck in relationships, jobs, cities or mindsets that are comfortable, but make them miserable. If something is making you miserable, don’t settle for it. The Six of Swords is telling you that your “dark knight” of the soul is coming to a close. This means that what lies before you is the breaking dawn of a new path. Even if it is hard, trust the moral obligation your soul has made with itself and our world. Don’t stay in a dead in job or a relationship you’re not happy with. You have a duty to follow what you love. It will be scary. It will be hard. You will wonder if you’ve made the right decision. Know that if you follow your soul’s quest, you will always have made the right decision.

Six of Swords on a Mundane Level

The Six of Swords signals boat trips. You maybe taking a trip or a vacation.

In my experience, this is the number one card to signal a vacation.

The Six of Swords Reversed can indicate travel delays and postponements.

The Six of Swords Reversed can indicate computer maleware or computer viruses on your computer.

The Six of Swords reversed can indicate that you are unable to leave a bad situation.