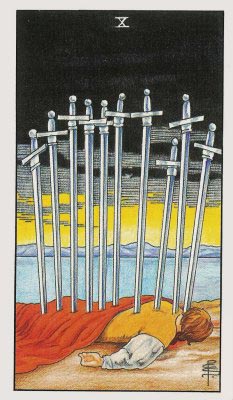 Ten of Swords Description and Symbolism

A man lay dead with ten swords in his back. There is a body of water with mountains near him. The sky is dark, but there is a rising yellow sky pushing through the darkness. Grayish-black clouds loom between the rising sun and the black night sky. The sun rising suggests that no matter how bleak the situation, the sun will always rise giving way to a new day.

The man is wearing an orange vest with a red blanket draped over him. Red and orange are very earthy colors, which also have the shortest wavelength. Both red and orange are associated with lower level chakras, which represent more basic physical needs. There is blood dripping out near his head. The person stabbed him to death wanted to make sure he was truly dead because ten swords is a little much.

Ten of Swords Interpretation and Divination

The Ten of Swords translates as annihilation, scorn, back stabbing and the end of a situation. There is nothing left to do. What is, is. This is the final ordeal. You won’t have to deal with this problem again if you face it head on, which you will have to do. This is the end.

But often the querent does not accept this loss and continues to fight, thus making the situation worse. There are often lies, deceit and backstabbing. Many times, the Ten of Swords can indicate someone who refuses to let go of a situation that needs to die. They continually keep the ordeal going only to get stabbed over and over and over again. They victimize themselves.

There is only one place to go when you are at the bottom and that is up. Try to look at things positively from here. Let go and let the blood drain, the pain go away and move forward with your life.

All those swords in the back is overkill and quite dramatic. It can represent over dramatizing a situation and self victimization.

The Ten of Swords can indicate talking about a problem over and over again. You are beating a dead horse.

Ten of Swords in Love

The Ten of Swords does not go well with love. If you are already in a relationship then the end is probably near. Be careful because either both or one of you is going to be vindictive about the ending. There could be some backstabbing.

Ten of Swords as Feelings

You are feeling stabbed in the back or betrayed. You feel that this is the end of everything. Mentally you feel very taxed.

Ten of Swords as Advice

There is nothing more you can say about a situation, so don’t say anymore. Air is not as comfortable embedded in the number ten. Essentially, it’s the end of the line for the Ten of Air, so take a deep breath, breathe and start over with new thoughts.

You’ve won the battle. Allow sleeping dogs to lie. There is nothing left to say. Allow a new day to bloom.

Anything stagnant needs to be removed. If you are ‘beating a dead horse’ then you need to realize there is nothing else left to do and move on.

A conversation you are having with someone is one-way and you need to move on to a new conversation, debate or person.

In romance, things aren’t working out and you should move in a new direction. It might not seem this way because things keep going back and forth, but the best advice is just to start anew.

Ten of Swords on a Mundane Level

The Ten of Swords can mean being “dead” tired. You could possibly sleep 15 hours.

The Ten of Swords reversed indicates that you maybe healing from a past hurt. You are ready to heal and even though it will be a long process, it is something that you are willing to undertake. For instance, the querent knows that the relationship is over and is ready to move on. Relief can be found from talking about a problem.

The Ten of Swords Reversed can indicate surgeries. The surgery will go well and the querent is taking steps to heal.

Ten of Swords and Empress:

a. In vitro Fertilization.

Ten of Swords and Death:

a. It’s over. Really. Stop asking.

Ten of Swords and Devil:

a. Unable to let go of a situation or relationship that is dead and over.

b. Tying yourself mentally to a painful situation.

Ten of Swords and Sun:

a. Having to beat a dead horse, in order to get clarity.

b. Talking out a situation (to death), in order to understand the situation better.

c. The end of a horrible situation, brings the realization of a new happy day.

d. There’s always a silver lining to a tragedy.

e. When you’re at rock bottom, there is no wear to go but up (that’s a good thing!).

Ten of Swords and Five of Wands:

a. It’s just not getting any better even when you try.

Ten of Swords and Page of Wands:

a. A message is delivered to someone who relentlessly tries over and over again, yet the answer is always no.

a. Someone is plotting to take you down. Tread carefully.

Ten of Swords and Six of Cups:

Ten of Swords and the King of Cups:

a. Being dead tired of a situation that you are unable to free yourself from. This situation involves a man similar to the King of Cups.

Ten of Swords and Nine of Pentacles:

a. Being alone at home with back pain.

b. Being exhausted at home. Afternoon naps.

Ten of Swords and Ten of Pentacles:

b. Do not start a fight.