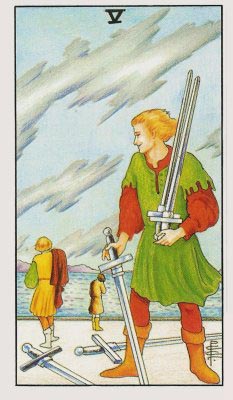 Five of Swords Description and Symbolism

The sky is streaked with jagged gray clouds against a periwinkle sky. A body of water looks rough and expansive. Small purple mountains meet the water in the distant background. The gray looming clouds and harsh sea make the scene even more ominous. The wind seems harsh and cold. The “victors” hair is blown straight back, while the clouds look as if they are moving quickly across the sky.

A man with a greedy look on his face is holding three swords. There are two additional men who are walking away. They have thrown down their swords. One man looks like he is crying from loss, while the other man is simply walking away without looking back. The greedy man looks wildly satisfied at the taste of someone else’s suffering. The greedy man who is holding the swords isn’t the real victor, for he already has three swords. He doesn’t need an extra two. Was this an unethical battle?

Five of Swords Interpretation and Divination

The Five of Swords has two meanings. You can feel like the man with all the swords or you can feel defeated like the men who are walking away. Either way, no one is actually winning.

You may be in a situation where someone is using slander, bribery or other unethical means to fight you. Someone maybe gossiping and spreading false rumors.

The Five of Swords is a warning that you may be the one who is gossiping. You maybe haughty and arrogant and use any means possible to “win”.

The Five of Swords can also be about thieves, con artists, and people who use any means possible to manipulate situations.

The Five of Swords cautions against criminal behavior.

The Five of Swords advises you to walk away. There are no true winners in this battle.

Five of Swords in Love

Generally, when the Five of Swords turns up in regard to love, it means head games, lying and manipulative behavior.

I think it’s easier to explain the love angle of the Five of Swords by breaking down its astrological correspondence.

The Five of Swords can indicate that someone is very good with words. A couple may have playful banter and stay up all night talking, but one person will play the role of the independent and free spirited Aquarius, while the other person is wishing on Venus for this to be the one. Venus causes a smothering effect on Aquarius and the two may not survive the relationship. There may be an effort on both sides to outwit and outsmart each other, but when love is a game, no one wins.

Five of Swords as Feelings

You could feel like love is a game. You feel either manipulative or manipulated. You may feel outwitted and outsmarted by someone who is quicker than you. The Five of Swords does not bring pleasant feelings at all!

Five of Swords as a Person

The Five of Swords can indicate sociopathic behavior or other mental illnesses. It could signal that someone you know (or yourself) doesn’t have compassion or guilt for any wrongful actions. It can even indicate someone with a Narcissistic Personality Disorder or any of the DSM-V personality disorders.

But on a brighter side, someone who is a Five of Swords is someone who is good with words, witty, and intellectually very shrewd. They may be extremely competitive and enjoy competitive sports like tennis, golf or any sport that focuses on the individual rather than the team.

A Five of Swords person can be very flighty in love and in general they may go from one activity or person quickly.

Five of Swords as Advice

The Five of Swords could be advising you to take what you can. Sometimes you need to be cunning and ruthless.

The best advice when you get the five of swords is to consider where the information is coming from and avoid dwelling on anything negative. Positive affirmations will help you succeed even when you feel defeated. Look for the silver lining and move forward with love. Don’t stoop down to a lower level. Love always defeats hate even when it doesn’t seem like it.

The meaning of the Five of Swords reversed doesn’t change. There is still deep anger and remorse.

Five of Swords and Chariot:

a. Victory will require you to stay in complete control. Emotions are not required at this time.

b. Staying focused on the end result no matter who or what is in your way.

Five of Swords and Death:

a. Can indicate a funeral.

Five of Swords and Ace of Wands:

a. A fight where you have the upper hand.  b. The sparks start flying and a fight ensues.

Five of Swords and Two of Swords:

Five of Swords and Nine of Cups:

a. Feeling very smug after winning an unethical battle.