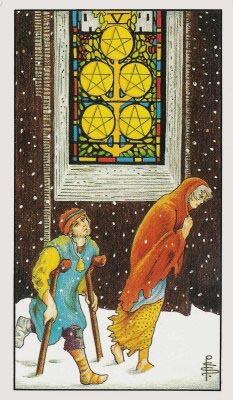 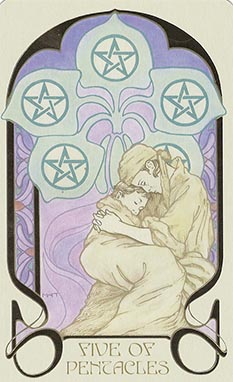 Five of Pentacles Description and Symbolism

Two people walk outside a beautifully lit church. The window to the church is stained glass. They are worn out, tired, and hungry. The man is in need of a doctor’s care. He has a broken leg and is walking on crutches. The woman is cold and bracing herself against the bitter wind. The man looks up towards the church, but the woman walks with her head to the snow covered ground. Her hair looks prematurely gray. Perhaps there is hope in the church, yet there is no door, only a window. How does one get inside a church without a door?

He wears a bell of hope around his neck. Cows wear bells around their necks. This is probably so they can be found by their owners. It’s also a nod to Taurus, who is the bull.

The Five of Pentacles rules the First decan of Taurus.

The Hierophant rules Taurus and the Magician rules Mercury. Think of the people outside ruled by Mercury and the church inside ruled by the Hierophant. The Magician in Mercury wants to make things happen by magic. He is quick and speedy. Taurus, as ruled by the Hierophant, thinks things through carefully and deliberately. These opposing elements are seen superficially when Mercury is in Taurus. Suddenly the couple loses their divine voice of the Hierophant, so much so that they can’t even see the church. They speed along in their mercurian world pushing towards an unknown future. So air and fire meet together, trying to blend. This is the superficial image of this card.

But below the surface we can imagine that a door exists just around the corner. Taurus makes sure that the couple does have a plan and with the Magician on their side they do have the tools to survive, they are just slow about it. Perhaps they are taking the longer route.

There is always a way and the Magician knows this. He is the one that makes the impossible happen. These people have a plan. They may not look like they do, but the Hierophant (Taurus) says something different. Taurus always has a plan and will always follow through doing what he or she says they will do. There is an expression called “belling the cat” and it means that even if you think something is impossible, it isn’t. It comes from an Aesop fable. Though, the original moral goes something like, “It is one thing to make impossible plans, another to make them work.” The Magician will make sure you make the impossible happen, you just have to set the plan in action.

Five of Pentacles Interpretation and Divination

The Five of Pentacles could represent being on the outside and looking in. You see the things you want: friends, family, children, a spouse, new clothing, but you can’t get to them. You see other people with the things you want, but you just can’t see to get past that glass ceiling.

It can also represent being spiritually lost because of financial situations that take up all your time. You need to be financially secure before you can develop spiritual awareness. How can you possibly have the time to develop any spiritual awareness when you are outside in the cold weather without a place to prosper?

But remember the moral to the Aesop fable when you see this card show up. It can also indicate a marriage that will work itself through. It can indicate that you do have a strong plan, but you are taking the longer way around it. The Five of Pentacles also stands for perseverance that only you can see, since only you have the plan.

Five of Pentacles in Love

The Five of Pentacles could indicate that you feel rejected by a love interest. This person probably looks down upon you, so they aren’t a good match anyway.

If you are already in a relationship, the Five of Pentacles could indicate that you and your partner will make it through thick and thin. It might even strengthen your relationship.

Five of Pentacles as Feelings

You may feel left out and rejected. You get the feeling that you are on the outside looking in.

Five of Pentacles as Advice

Five of Pentacles as an Action

The Five of Pentacles tells you that you should wait a little bit. It’s a non action card. So just keep walking by. Don’t go in. Don’t change anything up because change is coming in its own time.  In general it is a, “no.”

Five of Pentacles in Health

The Five of Pentacles can even foretell broken bones and slow healing times. It can indicate that you are not taking very good care of your health.

Five of Pentacles as an Event or Situation

The Five of Pentacles can warn that you maybe evicted from your home.

Five of Pentacles as an Outcome

You will be forced to deal with something very uncomfortable, but will come out on the other side better than you did before.

Five of Pentacles on a Mundane Level

The Five of Pentacles could indicate a slow download time on your computer.

You could also be caught in a winter storm or busy preparing for a blizzard.

The Five of Pentacles Reversed can indicate a short term marriage that ends badly. You may have married someone for material gain or material comfort. You may have thought it was easier to share your material troubles with someone else. Rent was cut in half, the car payment was shared, etc. You may have been pressured into marriage because the “time was now or never.” It suggests two people who were never meant to be together now stuck in an unhappy marriage that will lead to divorce.

On the other hand, when the Five of Pentacles is reversed the window looks more like a door. If you are suffering from any kind of material troubles, exclusion from the group or spiritual devoid, the door is now open for you to go in.

Five of Pentacles and Lovers:
a. You married the wrong person.
b. Signals a breakup.

Five of Pentacles and Hermit:
a. Outcast of society. The weird ones no one wants to associate with.

Five of Pentacles and Star:
a. No money for the spa.

Five of Pentacles and Queen of Wands:
a. Be bold and walk by.
b. Take charge of your life.

Five of Pentacles and Three of Swords:
a. Unable to recover from an operation due to emotional stress.
b. Unpaid or unable to pay doctor’s bills due to a lengthy operation and continuous illness.

Five of Pentacles and Ten of Cups:
a. Somethings not right about this picture of a happy home.
b. Unable to commit to the “happy home” scenario.

Five of Pentacles and King of Cups:
a. He always seems to come in and help, but you must be aware of ulterior motives because why else would you feel out in the cold?
b. From a basic emotional level you feel worthless. This could definitely come from your father
or a father-like figure. Even a man who resembles the King of Cups can be making you have emotionally unsettling feelings of being unlovable,
desperation and worthlessness.

Five of Pentacles and Ten of Pentacles:
a. House hunting.
b. Feeling uncomfortable at home.
c. An unhappy marriage.

Five of Pentacles and Queen of Pentacles:
a. Being at home while working on the computer. Very slow download speeds result in racking up charges that could have been avoided.