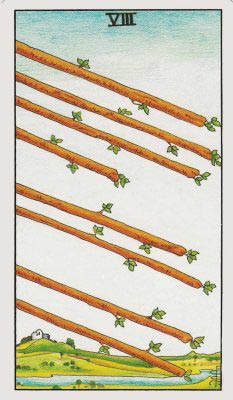 Eight of Wands Description and Symbolism

The only card in the entire arcana that does not depict a human or a body part of a human is the Eight of Wands. It is a simple card with just eight wands flying through a clear blue sky. They look as if they are in rapid action, racing against the wind and across the small rolls and valleys of the earth below.

They have been set to hit a specific target and nothing can stop their goal. Due to the laws of gravity, they are going to have to stop somewhere.

Eight of Wands Interpretation and Divination

The Eight of Wands is a card of action! A sudden burst of energy is going to emerge in the form of your solution. Everything will suddenly be clear. This sudden burst is what will propel us forward.  It’s in your best interest to take action. Hold nothing back.

We need this lightening rod effect to gain something important and meaningful. Jump in. Feel it. Live it. Let it guide you.

The Eight of Wands also suggests marathon, relay races, baton twirling, or any new exercise routines that get your blood pumping. There is a commitment to reach targeted health goals. Now is an excellent time to get in shape!

The Eight of Wands is one of the travel cards. You might be traveling somewhere via airplane. Look for cards like the Six of Swords or Knight of Wands to confirm this.

The Eight of Wands can predict moving into a new home. Look for the Two of Wands to support this.

Eight of Wands in Love

Love is “in the air” so to speak and things have been set up to hit their mark. You might be bursting at the seams with love for someone. You want to shout it out loud and proclaim your love and infatuation! You won’t be thinking when you blurt out, “I love you” to your new beau. You may not want to wait or think it through when it comes to your new romance.

The Eight of Wands signals swift romances and being swept off your feet. Look for the Knight of Cups to confirm romantic interludes and bubbling passion.

Eight of Wands as a Feeling

You may feel very intensely about someone or something. There is a real need to follow up with action.

Eight of Wands as Advice

Do it. Go for it. The Eight of Wands is already poised to hit its target, so continue on the path you are going down. If you want to send your boyfriend a text message professing your feelings, do this. On the other hand, if you want to break up with your girlfriend, do this. Whatever it is that you feel you need to do, go ahead and continue with the plans to finish it.

The Eight of Wands can also indicate physical activity. Marathon running and brisk walking. As advice for a healthy body, the Eight of Wands indicates that you should train hard for the marathon or hit the gym and follow through with your goals.

Eight of Wands as an Obstacle or Crossing Card

When the Eight of Wands falls as an obstacle, it might be suggesting that you are shooting too many arrows at once. You might have too much going on and not enough time in the day to finish them all. Make sure you are creating worthwhile goals and don’t spread yourself too thin.

Eight of Wands on a Mundane Level

The Eight of Wands also represents computers and technology because they move quickly. Look for important messages in your inbox. Texting is the new rapid form of communication. Look for new text messages that could bring fruition to a situation.

On an extremely mundane level, it can indicate playing darts, billiards or archery.

If the Eight of Wands is reversed there is a delay in action. Things don’t seem to be coming, but should. Someone is holding back, but really wants to message or contact you. There could be an unnatural feeling of things not running the way they should. There is a lack of accuracy.

The Eight of Wands Reversed can denote haste. You may have been careless with a project and not met your mark.

8 of Wands and the Fool:

8 of Wands and Wheel of Fortune:

a. A quick turn of events.

a. Rearrangement of plans. Plans almost delayed because of miscommunication.

a. A sudden realization that brings you heartache.

a. Taking a trip. Possibly a boat trip.

a. “I’m ignoring all your text messages. There are way too many!”

a. A million things to do without finishing one of them.

b. Making a list, checking it twice. Daydreaming about finishing them all.

8 of Wands and Knight of Cups:

b. He loves to write you love letters and text you all day.