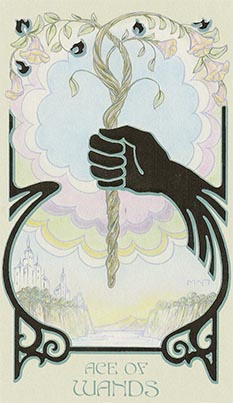 Lord of the Root of the Power of Fire

Yes or No Questions: Yes

Ace of Wands Description and Symbolism

A single white hand holds a wand bursting with fresh green leaves. The hand is white and devoid of color, which suggests the potential to manifest anything you want. Even the sky is white, beckoning you to begin anew. The blank slate or “white board” is yours to draw whatever pleases you. The cloud is tinged with gray. There is a castle in the background, surrounded by green and purple mountains. This suggests a mathematical component to all of things that are manifested. Behind even the simplest mountain are the fundamental mathematics that sustain the universe. Even though they look like cold, purple mountains, they are actually feeding the lush green foreground and creating the warm creek that runs underneath the wand. In esoteric studies, mountains represent attainment of the Great Work.

In front of the castle and mountains are three green trees with a little creek running through the landscape. These are the subconscious and fertile thoughts that manifest themselves in the lush green landscape.

Ace of Wands Interpretation and Divination

The Ace of Wands is the potential in any project. It is singular and raw. It is up to you to get it started and moving towards the physical. When any ace comes up in a reading, it signals that you have a potential that is not yet manifested into the physical.

The Ace of Wands is the initial burst of creative energy. It is the raw energy for starting a new project. It’s the motivation, the spark, the idea.  You have the courage to pursue something new, different, and exciting. Now is the time to start a new project.

When the Ace of Wands turns up in a reading, you may have the urge to travel to an exotic location that you have never been to before. You can even be moving some where brand new.

The Ace of Wands can be about raw sexual energy and energy manifesting itself into the physical. You may meet someone and feel definite chemistry.

The Ace of Wands can also signal the conception of a child. Conception is the great spark that ignites life. Look for the Ace of Pentacles for confirmation of the seed and egg coming together.

The Ace of Wands brings new job opportunities. You may have a great idea that is ready to be activated into reality. It’s not merely the thought of doing it, it is also the small baby steps you’ll take to make it happen. Make that list and then go ahead and implement it!

It’s an excellent time to start a new exercise regime or diet. The Ace of Wands is telling you to go for it!

Ace of Wands in Love

When you get the Ace of Wands in love, you are sure to have a sexual spark with your partner. Whether or not you take the initiative is up to you. The Ace of Wands is a passionate card.

The Ace of Wands is about unbridled attraction and the magnetism that brings two people together. It’s the absolute, unadulterated raw potential for something. Sometimes it’s difficult to control, but it’s up to you to make it happen.

Ace of Wands as Feelings

You are feeling alive, passionate, enthusiastic, and optimistic. If you are asking how some feels about you in a romantic way, then they feel excited about you. They may even feel thrilled to have the opportunity to get to know you and an overwhelming sense of stimulating joy. They feel that you and them have the potential to start something new and breathtaking. You may even take their breath away when they see you!

Ace of Wands as Advice

Ready or not, you better start! Ace of Wands is a NOW kind of card. It urges you to take action today. Don’t wait. Whatever you need to do needs to happen right now.

Ace of Wands as an Outcome

Aces in the outcome position could mean that what you hoped for will turn around and become something else. For instance, if you are asking, “Will I marry my boyfriend?” you might find yourself with an entirely new man in your life.

Ace of Wands is fire, identity, passion. You could be starting over again and rebuilding a new identity or creating a new role for yourself. A new public role could be campaigning as a politician for the first time. A new role could be that of becoming a new mom.

Think of the Ace of Wands as the first house with Aries energy where your personal identity and personae rest. It’s the beginning of an entirely new journey. Take the spark because you have it and use it before it burns out. Ace of Wands can burn out just as quickly as the idea began. Now is the time for action. Be spontaneous.

Reverse the Ace of Wands and it could indicate hasty decisions that aren’t exactly thought through completely. You may be building things in the sky, but lack the motivation to see anything through.

The Ace of Wands reversed can also indicate male sexual problems such as impotency. You partner may not even have the energy to perform sexually. There is a lack of romance or a laziness that is clouding the querent’s vision. They are uninterested in sex.

There is a definite “no” or a delay in an action that is supposed to happen. You may feel unmotivated, lethargic and tired.

Ace of Wands and Empress:

a. Conception of a baby

Ace of Wands and 2 of Wands:

a. You have the motivation and energy to manifest a project in the right direction

b. Believing in yourself and your new business idea.

Ace of Wands and Ace of Swords:

a. You have the idea for a new creative writing project

Ace of Wands and 5 of Swords:

a. Fight or argument where you have the upper hand.

Ace of Wands and Ten of Swords:

a. Clashes betweenw wanting to work and lack of sleep from the exhaustion of work.

Ace of Wands and Ace of Cups:

a. Feeling overwhelming sexual desire (though it may quickly burn out).

Ace of Wands and 2 of Cups:

a. You have a mutual and immediate sexual attraction. It is very intense.

b. You are offered a job opportunity and take it. This suggests a merger or  partnership that happens very quickly.

Ace of Wands and Page of Pentacles:

a. The start of a passionate and physical love affair that moves slower than usual.

b. Friendships can spark creative ideas that are long lasting.