The Knight of Swords 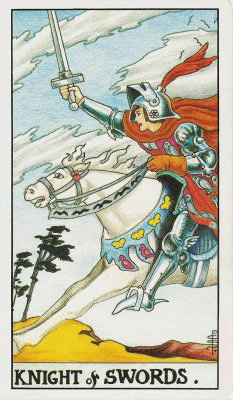 Lord of the Winds and Breezes

Knight of Swords Description and Symbolism

A Knight on a white horse is moving swiftly. The horse is charging forward at lightening pace. The Knight has his sword raised gallantly and dauntlessly. He is not ready for an attack like the Page of Swords. The Knight of Swords is attacking.

Even the horse seems afraid, but not the Knight. He doesn’t look like he is afraid of anything. This is a very undeveloped air quality. He doesn’t think about anything before he leaps. He makes brash and usually incorrect thinking. Unfortunately, this knight doesn’t have the foresight nor the self awareness of the king or queen in order to be able to correct his reckless behavior.

The Knight is dressed in shinny armor with evil looking pointed armored shoes. His red cape is waving back in the wind. He has taken the time to put birds all over his red cape. Birds can symbolize freedom and flight. There are also butterflies, which symbolize many things, but in the case of the Knight of Swords indicate metamorphosis, transmutation and death.  Like all the court cards, they are the most easily adaptable to situations.

The clouds are jagged and gray. They look like the same clouds that are in the Five of Swords, which can be very telling to the character of the Knight of Swords.

Knight of Swords Interpretation and Divination

When the Knight of Swords comes up in a reading, it could denote that you will be involved in some kind of litigation. I have often found this card to be ill-dignified whether it’s upright, reversed or next to well suited cards. The litigation is almost always unfair and usually bound to some negative karma.

Expect something coming or going rapidly. Either you will get out of a situation that you were barely in to begin with or you throw yourself into a situation head first without thinking things through like the Queen or King of Swords would. This knight is notorious for thinking he knows it all or has it all figured out when he doesn’t. Think about it this way, you could even be riding by so fast that you don’t see what is around you. The Knight of Swords can have tunnel vision with a pit-bull lock jaw. When he sees something, he rapidly advances making snap decisions while he rolls by. This can come as an advantage or a disadvantage depending on the situation.

Knight of Swords as a Person

A young person who is quick and moves very fast. The Knight of Swords is impatient. It could also denote a man or woman who is fresh, young and unmarried.

The Knight of Swords may love game theory and the art of negotiation. The Knight of Swords will spend hours strategizing, but because they are extremely self absorbed, they can end up not seeing a situation from different angles. They then have a tendency to become rash, abrupt and self-serving.

When called out on his bad behavior, the Knight of Swords will usually resort to insulting and name calling.

The Knight of Swords can have an anger problem. He is very rebellious and could be an anarchist.

Knight of Swords in Love

If you are romanced by the Knight of Swords it will move very fast. It can definitely indicate quick whirlwind romances. If you look closely you will see that there is a little heart on the reins of the horse. He or She maybe the type that will feel the need to rescue a damsel in distress. His white horse says that his intentions can be pure of heart. Don’t underestimate this Knight to be what Waite calls, “a prototypical hero of romantic chivalry.” (Waite, 230)

Knight of Swords as Feelings

The Knight of Swords is all about his thoughts. Before we have the thought, we have the feeling. They are interconnected and very interchangeable. One is the conscious version and the other is the subconscious version.  I say this because I’ve heard a lot of people ask, “How does he feel about me?” and then (perhaps they are not satisfied with that answer), “What does he think about me?”

I understand the minute difference between thinking and feeling. And I understand how these could be perceived as different. Perhaps he/she thinks you are like the Knight of Swords, and they feel you advancing rapidly.

So if you ask, “How does he/she feel about me?” and the Knight of Swords comes up he certainly feels something and it probably has to do with rescuing you, swiftly moving in, advancing rapidly. He has been thinking a lot about you and now has feelings for you that are closer to his heart.

Knight of Swords as a Strength

You or someone that is close to you is very sharp witted, logical, and has a masculine way of looking at things. You can draw on this logical mindset to solve a problem or see a situation clearly without getting any emotions involved.

Knight of Swords as an Event

As an event it can indicate war and suggests a military presence.

The Knight of Swords can foretell of a lawsuit.

The Knight of Swords as Advice

The Knight of Swords advises you to cut old ties and create new paths. You must do this rapidly and quickly. There isn’t any time to delay. You may need to pull an all-nighter and stay up getting everything done as efficiently and quickly as possible.

The Knight of Swords on Mundane Level

Can indicate a thunderstorm or tornado that is unexpected.

The Knight of Swords as a Profession

The Knight of Swords Reversed

Be scared when the Knight of Swords turns up reversed in a reading. This man may be some kind of sociopath. He is cruel, uncaring and vile.

He may try to use violence and brute force to get what he wants. He is almost completely removed from emotions, so be careful! He is arrogant, cocky, and decisive. Since his emotions are suppressed, he is fearless and has nothing to lose.

Like the upright Knight of Swords, he can be quick to anger. He can blow up over the smallest thing and become violent. Throwing objects at you and getting into bar fights are some of his attributes.

In love, he (or she) is the type that can break up with you on a whim and never think about you or the situation again.