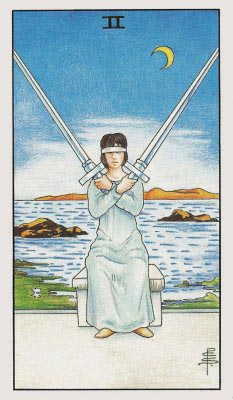 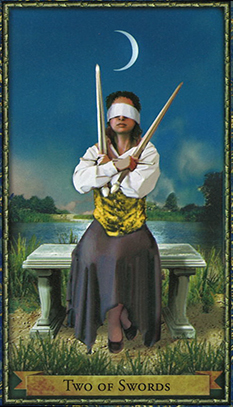 Two of Swords Description and Symbolism

A woman sits behind a large body of water where small rocks and mountains make their home. The water looks choppy and may have strong currents, yet green algae grows near the water, which indicate lack of oxygen and stagnation. Water symbolizes subconscious memory, so the stagnation and rocky waves indicate an imbalance.

She sits on a gray stone bench. Her dress is a periwinkle like a gray winter sky. Things seem slightly bleak for this woman.

She is blindfolded and holds two swords across her chest. She is protecting her heart and remains guarded. Since Libra rules over the Two of Swords, we get the sense that her blindfold will help her weigh the situation carefully. The blindfold helps her “see” the situation from an emotional and intuitive point of view.

The blindfold can also represent being unable to see or refusing to see a situation or person.

It is night as indicated by the crescent moon in the sky. A crescent moon has very little light and the situation is not complete; there is more left to do. The moon rules over the waters, subconscious and emotions. She is left alone in the darkness to try and balance her emotions.

The Two of Swords can indicate a relationship, especially because of the number the card represents. Two people have come together with equal force and met each other with resistance. Neither one is able to given in, so the tension builds. If the tensions breaks, both will feel heavy. If one gives in both will feel hurt. It’s not a good card. Both people need to find balance. Both need to let their guard down. There is something deep in the subconscious waters below.

The Two of Swords indicates that you may have to go inside to seek a solution. But a solution must be met, because nothing is happening now. She is keeping the two swords apart, but it’s temporary. She has been deliberately avoiding the truth.

Meditation. Mediation. Try these peaceful tactics because sooner or later those heavy swords are going to turn into a burden and you will finally have to drop them.

Two of Swords in Love

The two swords are literally blocking the emotions and heart. It can indicate a relationship that won’t progress because one person is fearful of being hurt, so they cover their heart, while the other partner keeps trying only to keep getting shut down.

It can also indicate that one person really doesn’t want to be in a relationship and the other person is trying to force themselves in.

If you are in a relationship, the Two of Swords can indicate fighting, bickering and unsettled thoughts. There is trouble in the relationship. There could also be mental disorders where the person doesn’t know how to cope.

Two of Swords as Feelings

As a feeling, the Two of Swords can indicate a person who is confused, in denial or feeling very conflicted. There is a conflict between emotions and intellect. They don’t want to feel anything and may replace it with more conscious thoughts. The subconscious is merging with the conscious mind where subconscious thoughts may creep into the conscious, waking mind only to be pushed down again. Eventually a resolution will have to be met between your feelings and your thoughts.

Two of Swords as Advice

The Two of Swords advises you to protect your heart. Your instinct to protect yourself is probably dead on. Someone might be aggressively coming toward you and your reaction is defensive. Go with your gut. If you need time to consider your next course of action, wait until the next full moon.

Two of Swords as an Event

The Two of Swords can foretell of serious situations involving war and aggression.

Two of Swords on a Mundane Level

The Two of Swords also indicates a stalemate to a situation where two people are refusing to budge. “No, I won’t.” “I refuse,” might be common phrases when the Two of Swords comes up in a reading.

The Two of Swords Reversed indicates that a situation that was held at bay, is now coming to a head. You could be dropping your swords and looking for a solution.

Two of Swords and Chariot:

a. Trying unsuccessful to get someone to do something that they don’t want to do.

b. Unsuccessfully forcing your way into a situation.

Two of Swords and Tower:

Two of Swords and World:

a. “No, it’s not over!” Refusing to acknowledge that it’s over.

Two of Swords and Knight of Wands:

a. A major traffic delays and jams from all direction. No way around the traffic jam.

Two of Swords and Seven of Swords:

a. Protecting your heart from love. Running from love.

b. “No, I am not going to succumb to your strategically manipulative plans. I’ve got my own plans.”

Two of Swords and Two of Cups:

b. Creating emotional distance to protect yourself from feeling vulnerable.

Two of Swords and Six of Cups:

a. Being a good friend sometimes requires doing nothing but listening and sympathizing.

b. Saying no to the warm fuzzy feelings.