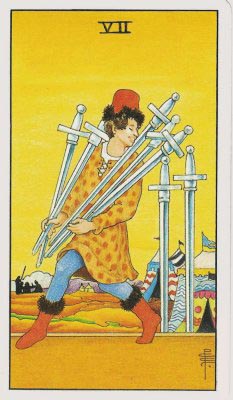 Seven of Swords Description and Symbolism

A man in a Fez hat is striding away with five of the seven swords he wants to steal. Two remaining swords are erected into the ground. They look strong and stable. The man has his eyes closed and is facing the carnival colored tents. He has a smile on his face, which looks more like a smirk.

His hat is common in North Africa and Turkey. We may deduce that this man is a foreigner. This symbolizes doing something that is outside of normal European social norms, where tarot derives.  Fez hats are also traditionally donned by the military. He uses his military stealth tactics to take the swords. We might even assume that he stole the hat to appear more like the enemy. Perhaps he’s a European in a foreign land. The Seven of Swords often comes up for someone foreign to you. Perhaps, the people in the tents have traveled to foreign lands and they are out of their element. On the flip side, he could be the foreigner infiltrating the native camp. Either way, he appears cunning.

The yellow sky can represent sunset or sunrise; his sneak attack is done while the others are planning and eating. Yellow in tarot represents intellect, so we have the element of someone who uses their intelligence as their primary mode of activity. We see the shadowy figures in the background with a sword raised. Sneak and covert attacks are a recent military strategy. Warfare use to be conducted with both parties knowing when and where the battles were to take place. The military fellow is using extremely underhanded tactics while playing this war game.

One of the main meanings for the Seven of Swords on a basic, exoteric level indicates stealing. Sometimes it is done for the rush of stealing and other times it is a well-designed and thought out plan. If you are the person who is in the shadows, you may not even be aware of the thief, so stand guard over what you value whether it’s your heart or your possessions.

The Seven of Swords is a lot like the Five of Swords, but you don’t know that you are playing the game. Are you the hunter or the prey? If you didn’t know there was a manipulative game taking place, then you are probably the prey and you just might get played.

This might be someone who doesn’t want to be honest and open. They don’t prize communication, but would rather run from the truth. The Seven of Swords is represented by The Moon in Aquarius, which brings in a dark, detached feeling to the world. Moon in Aquarius is one of the most cool, calm and unemotional placements for the moon. A perfect emotional placement for this guy, who is unaffected (he even has his eyes closed) by the people in the background.

Seven is a prime and a single number. This indicates that you, and only you, are on this journey. You must be clever, keen and acutely aware of your current situation.

Seven of Swords in Love

This is a very unsavory card to get in a love reading. It indicates that someone is sneaking around behind you. It could indicate an affair. They maybe clumsy about it. Look for clues. Do they smell like perfume or cologne? Do they work late, yet aren’t accounted for at the office? Do they often have business dinner meetings? If yes, someone maybe cheating on you.

If you are asking about a potential love interest, he or she probably wants to go at it alone. This is the soloist card; the card of the lone wolf. You may also want to be very careful around this person. He or she is very shrewd and cunning.

Seven of Swords as Feelings

You may feel a surge of cunningness or calculating behavior. You may even feel left out or attacked and are on the offense. You feel shrewd, crafty, acute and perhaps even a bit crafty. If you are asking about how someone feels about you, they may feel that you have slighted them. They feel that you are someone who goes at it alone. You could be in a situation that makes you feel that the other person is vengeful and an antagonist. 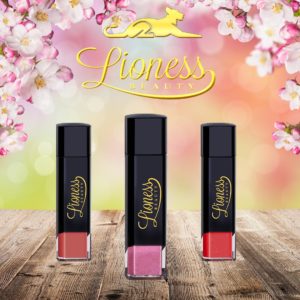 Seven of Swords as Advice

The Seven of Swords urges you to use your mind to escape a situation. You maybe stuck in a situation where you need to be cunning. You may need to do some spying or searching to one up on someone else. The best defensive is an offensive move. Make sure all your ducks are lined up before someone else comes in and attacks. The Seven of Swords indicates a stealth like attack. You may not even realize there are other options for you when you are in a tricky situation. On a more positive note, the Seven of Swords can be helpful when you need to solve a puzzle or use your mind in a different way. Thinking out side of the box should be your objective. This is a solo mission. Trust yourself and your instincts. Look out for numero uno.

Seven of Swords as an Action

The Seven of Swords reversed can indicate a situation that catches you off guard. A sneaky, scheming plan you may have had has fallen through. Someone else may have the upper hand and uses excessive lies to manipulate you even further. You may start babbling and are caught completely off guard and blindsided. On the other side, you may want honesty from a situation and get it. You realize how you’ve been duped the entire time. A lover, friend or business associate could come clean about how they have manipulated you. You are now mentally confused because your allies have turned against you and are really your enemies. This might be a good time to channel your own inner upright Seven of Swords and turn the page against them. On another level, it can indicate that a thief or criminal is caught. Look for the Reversed Seven of Swords, Justice and Eight of Swords to indicate jail.