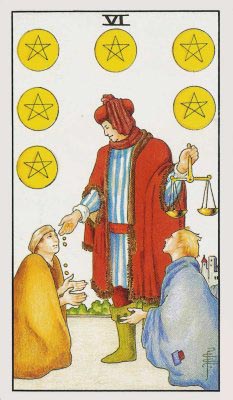 Six of Pentacles Description and Symbolism

A man gives out money to those that are begging. He carries a scale in his left hand. The scale should represent fairness, but when we look a little closer we can see that the scale is slightly tipped to one side. The man on the right, who is not receiving any coins looks more in need. His cloak is torn and patched and he doesn’t have a hat. The charitable man is giving the man with a hat four gold coins, while the man with the torn cloak is begging. Since this is the Six of Pentacles, we must assume that the man with the torn cloak will receive the other two coins. After all, there are two pentacles above the hatless man and three above the other man.

Perhaps the man with the hat is more resourceful and he will be able to use the coins more wisely and economically. Perhaps he will be able to make his money grow, while the poorer man, though, he has more of a need for the coins, does not have a good business sense. But is this the act of true generosity? The man who gives the money is very well dressed, which indicates that he is very caught up in material wealth.

The Six of Pentacles card is in the guise of charity, for really the man is not as charitable as he seems. Is this the act of true generosity? Doubtful because it is another stage card. So even though the man seems generous, he is self serving. He doesn’t give because he cares, he gives because he views it as a business transaction. Or he gives money so that other people can see his “generous” act. This is the type of person who gives money and then announces at a dinner party how “magnanimous” they are. And as Waite writes, “A person in the guise of merchant.”

Six of Pentacles Interpretation and Divination

The Six of Pentacles can have two meanings. You can either be the man getting the handout or the man giving the handout. If you are the man who is receiving know that it is okay to ask for help. Welfare isn’t a bad thing if you need it. Just be aware of the lesson of the other man and spend your money wisely. Use your money to make more money. Perhaps you need to reevaluate how you are spending your money and living your life. Are you using your own personal power to grow into a better person?

The second meaning of the Six of Pentacles can be from the view of the man giving the donations. It is okay to give away your wealth, especially if you have more than you need. Good karma will result from such a good deed, but be aware that if you only give because you think that it will result in good karma, then it really isn’t a good deed. It is a selfish act.

The man giving the money is most likely a sharp business man who is always thinking practically about money. Maybe he realizes that these are merely investments and the man who gets the most coins is the better investment. You may be trying to decide on who or what to give your money to. Make a wise business decision. You maybe ready to host a charity event or are deciding between two business prospects. Use your head.

You can also be the man who needs more money, but spends it foolishly. Perhaps you need to reevaluate how you are spending your money and living your life. Are you using your own personal power to grow into a better person?

Six of Pentacles in Love

A good sign as the sixes are fairly good signs in love. Just be aware of the roles that everyone plays in this relationship. Despite the scales this card does not indicate equality in a relationship. One person gets more than the other person.

The Six of Pentacles can suggest a relationship where the wife has to constantly ask for money. She has a very small budget compared to the man’s budget. He indulges in fancy vacations, luxury cars, and designer clothing, but she may not be allowed the luxury items that he gives himself. Though, they are both comfortable in this relationship. She feels happy tending to the house. All her needs are met. He feels powerful and in charge. This is one of the most common meanings that I have found during love readings.

Be careful of who has the upper hand in the relationship. There are some manipulations coming from the merchant. Real intentions are hidden from plain view. Superiority complexes and egos are common in this type of relationship. For instance, your boyfriend or husband may take you shopping so that you look good in sexy clothing. The clothing aren’t for you, but for him. He looks good when he’s with you in your tight jeans or designer dresses.

The Six of Pentacles in love can also be about unequal love triangles, but look for supporting cards such as the Three of Swords or Three of Cups. It can indicate that a wealthy man has two girlfriends or most likely a wife and a girlfriend on the side. One woman comes away with the situation with more material gain than the other woman.

Six of Pentacles as Feelings

You feel charitable and may want to give to someone in order to get something in return.

If you are asking about a love interest’s feelings towards you, then they feel like they may like you a little bit. They may even feel like they are on a power trip, such as, “oh she/he likes me and that makes me feel good.” But has no intentions of fully returning the feelings.

Six of Pentacles as an Obstacle

The Six of Pentacles as an obstacle can represent a business deal that does not go in your favor no matter how you plead or beg. It doesn’t even matter if the situation is truly fair. You aren’t going to get a good deal.

Same applies to an obstacle in romance. You will get the shorter end of the deal. She could like him a great deal less that you like her or vice versus. Think of the theme Greg Behrendt tapped into while penning the catch phrase, “He’s Just Not That Into You.” This could even translate into a “friends with benefits” deal where you agree hoping you get a real relationship out of it.

Six of Pentacles as Advice

If you are feeling overwhelmed by work, then the Six of Pentacles advises you to take a vacation or just a short break.

You might need to have a face-to-face conversation with someone. The situation won’t resolve itself unless you meet in person.

Six of Pentacles as an Action

You will be traveling for work, seminars or group activities. You won’t be alone. Others will join you.

Six of Pentacle as an Outcome

Something that belongs to you will come back. If you’ve been looking for something, you’ll find it.

Things are moving in a positive direction. Allow them to unfold naturally. Don’t give up faith now. You have divine guidance in your league.

You will be able to pay off your credit cards or any debits you’ve incurred probably from some kind of inheritance, gift or raise at work.

You may not get what you want. When the Six of Pentacles is upright, you get help or you are helping. But when the Six of Pentacles appears reversed in your spread there is now no balance. There may be an injustice where someone may be charitable only to advance themselves. It can indicate unfair court proceedings as indicated by the justice scales being tipped over.

Six of Pentacles and Lovers:
a. Your lover/boyfriend/husbands takes you shopping.

Six of Pentacles and Wheel of Fortune:
a. Getting lucky at the slots.
b. Pay day.

Six of Pentacles and Death:
a. An event where half the people show up.

Six of Pentacles and Ace of Wands Reversed:
a. Neglecting a cause, work or anything you’ve committed yourself to.

Six of Pentacles and Two of Wands:
a. Trying to decide where to place your charity.

Six of Pentacles and Three of Wands:
a. Pay day/ Pay out.

Six of Pentacles and Two of Cups:
a. Giving to a charity event
b. Signing of contracts that benefit all.
c. Having a romantic partner where there are big socioeconomic.
differences.

Six of Pentacles and Ace of Pentacles:
a. You don’t get the money you asked for.
b. Someone is purposely witholding.