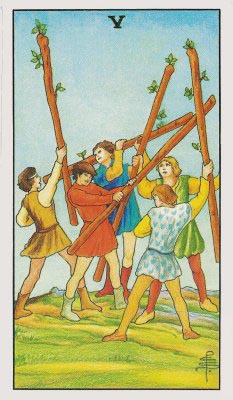 Five of Wands Description and Symbolism

Five people fight with similar wands. They are all different, yet are equally equipped to bring similar results to the situation. Not being monotonous, they all wear different garments. We get the sense that each wants to take the lead, yet none of the others will surrender. One person will end up the victor, but that time hasn’t come yet.

Since they all hold wands and not swords and because they are not wearing uniforms, it does look like they are play fighting. Maybe they are practicing for the real battle, which is in the future.

The Five of Wands indicates that there are lots of activities in your life. There are many different people competing or there may just be a lot of different people involved in your situation.

The Five of Wands may indicate that this is a highly competitive time in your life. You may feel fierce and full of fire. You want to get to the top of the situation and are up against people who have equal amounts of clout and ambition. You may need to work just a little bit harder to stand out among all the other people.

The Five of Wands can suggest friendly group sports such as soccer, basketball or football. The Five of Wands wants you to have fun and hopes that you don’t take the sporty competition too seriously because the game can easily get brutal.

The Five of Wands represents Saturn in Leo. Leo always wants to be the center of attention and they don’t like sharing the spotlight. Saturn brings in restrictions, boundaries and limitations. The traditional RWS card depicts five equally equipped men coming together in a mock battle. Each is fighting to be the number one (or the Leo of the group), but with Saturn bringing in discipline the men will have to work together in order for balance to occur. They can’t do it without the help of everyone else.

The lesson of Saturn in Leo, as it corresponds to the Five of Wands is that being the star of the show won’t help you improve. You need to rely on others to help you win the situation. Even when people spar, they can’t spar on their own. They need another person or a group to help them learn to be the best.

Five of Wands in Love

In love, the Five of Wands can signal that there are other people vying for your love interest. It can also suggest that conflict and intellectual discourse turn you on.

Five of Wands as Feelings

You could be feeling energetic, athletic, competitive, and full of energy.

Five of Wands as Advice

The Five of Wands suggest that you need to be thinking creatively and “outside-the-box.”

On the other hand, the Five of Wands as advice points to group work and team work. If you are having difficulties at work, try to be more of a team player.

As advice in love, the Five of Wands suggests that you need to spice up your sex life. Perhaps you’ve been doing the exact same thing over and over. Do something new that will excite your partner and ignite the passion.

Five of Wands as an Outcome

The Five of Wands as an outcome card suggests that you’ll end up working together in a group, which will help you grow. Adjustments will occur whether or like it or not and it will be for the best.

Five of Wands on a Mundane Level

On a mundane level this card could be indicating that you’ll be running a lot of errands. Also indicates children playing outside.

The Five of Wands Reversed can indicate that competition has turned underhanded and you are out of your league. Things might escalate to the extreme where people are using devious antics to “win” at all cost.

On the other hand, the Five of Wands Reversed can indicate apathy towards a situation and lack of fire. You may not want to compete at all and run from the competition only to find out later that deep down you really wanted to compete.

5 of Wands and Death:

a. We don’t fight anymore.

b. We don’t compete against each other anymore.

a. Lots of activities centered around getting a party or wedding up and running.

a. Beating the odds and winning the victory.

5 of Wands and Ace of Swords:

a. A situation where people are equally armed requires you to be underhanded and cunning.

5 of Wands and Page of Cups:

a. Lots of activity with the people you love.

5 of Wands and 5 of Pentacles:

a. The group of women make sure to exclude the other woman and her child