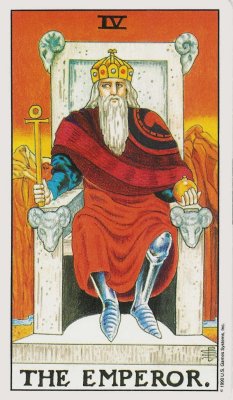 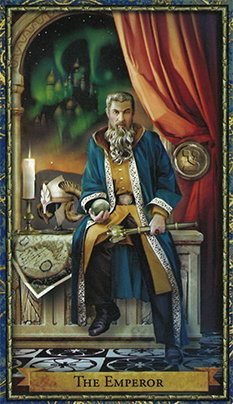 Son of the Morning

An older man with a long white beard sits at a stone throne. His throne is gray with rocks from the Earth. There are four ram heads, which form the four corners of it. He sits, but is ready for action. He doesn’t relax as he surveys what is before him. Behind him yellow and red burn the sky. The mountains that tower before him are also red. This is because he rules the color scarlet. There is one small blue stream that trickles down the base of the mountains that runs laterally across the image.

The Emperor is wearing a red cloak with the symbol of Aries on it. A small amount of blue can be seen on the sleeves. We see armor poking out from under his red scarlet robes. He is holding the symbol for male and an orb both upright and rigid. His crown is large and gold with jewels running around the circumference.

He is a good ruler, who is very disciplined. The Emperor is a strong leader and a paternal archetype. He rules over his kingdom with discipline, law and order, and in absolute control. Everyone obeys him. His foundation is solid and balanced. He takes great care at ruling methodically and meticulously. He rules with his head not his emotions.

The Emperor needs his Empress, for without her he becomes cold and his logic turns tyrannical. The love of his Empress is what gives him the strength of compassion.

The Emperor is the embodiment of all the Kings.

If you get the Emperor in a reading, it could mean that you need to exert self-control and discipline in all matters. You may even meet a very successful, older business man who can help you build a business.

When you get the Emperor in a reading it can mean that you will come across an older man of authority. This could be a father figure or a man of authority, such as a police officer or general in the military. This man will help you in the areas of your life that need structure, discipline, and stability. You will learn a lot from this person.

The Emperor rules the element of fire. He is the action and spark that can ignite an idea. He is the business owner who never loses his resolve. He speaks directly to all the Kings.

He needs the Empress to nurture, sooth, and love him. No one can rule alone. Where the Empress is the fertile, loving, nurturing womb, the Emperor is the solid land, the building with a strong foundation, and the law and order of the people.

The Emperor suggests that you have a good relationship with your father.

The Emperor in Love

You may meet an older man who is very helpful to you. It is possible to grow to love this man. He may remind you of your father. The Emperor doesn’t speak of undying love or passion. He usually wants an Empress type of female. Someone who dresses up or is feminine in another aspect. Maybe she loves to have a garden and cook, since he loves to eat and loves to walk among her garden. He needs a very feminine woman in his life because of his extreme masculine energy.

In a relationship the Emperor usually needs to be the boss of the situation. He will want to take control and you may even have to be subjugated to him. He has very male oriented principles such as the female being submissive to the male. He always thinks he knows what he’s doing even when he doesn’t. He usually doesn’t let people into his emotional side and when he doesn’t get his way in love, he can be extremely aggressive. He may send flowers, follower her on face book, or find different ways to infiltrate her life. He’s the type that will call his wife five times a day when she’s way on a trip. He believes this is a devotion of love, but in reality, it’s a controlling aspect of being in an Emperor relationship.

The Emperor as Feelings

The Emperor isn’t a feeling type of card. He’s all about logic, control and that reasoning mind. If you get the Emperor in the placement of, “How does my love interest feel about me”, I would read it in two different ways depending on the surrounding cards.

First, he may not feel anything. He is being rational about everything and doesn’t have romantic feelings towards you.

Second, he could feel the need to control you. He (or she) feels like they have all the power in the relationship and can yield that power when they choose. He could easily feel like you complement him in some way as a trophy to his already growing trophy of things.

Emperor as the Outcome (Love)

If you are a female seeking a male in a relationship, then the Emperor is a good card to get as the outcome card. It speaks of building a family, stability and structure. This man wants to build a family with you. If you see the Empress or Lovers card in the reading with the Emperor you have found the perfect love.

Depending on the surrounding cards, the Emperor will mean that the relationship will stay as it is. This can be a good or bad thing. If there are lots of swords in the reading it can indicate its rather mental and far less full of emotions. If you are asking about a love interest, rather than a standing relationship, your relationship will stay as it is–a love interest. The Emperor doesn’t change his mind often, so whatever he feels or thinks in the present moment, is exactly how he will stay.

The Emperor in Career

Perhaps an older man will give you a loan or provide mentoring to you. Occupations that could be coming your way are ones where you are the boss.

In a business the Emperor is usually the one always calling shots. He can be so rigid that he never learns from his mistakes even if they are plain as day. He wouldn’t yield under pressure and can find ways to get his way no matter what. Types of jobs that suit the Emperor archetype are any jobs where he takes the lead. He has to be the boss. A self-employed business man. He can be very shrewd when it comes to business and if his business is failing he either blames someone else or will do something underhanded such as creative accounting in order to show a profit that doesn’t exist in order to get prospective buyer. He may seem stoic and silent on the surface, but he’s usually observing everything, waiting for the right move.

The Emperor as Advice

The Emperor could indicate that you need to focus more on logic than emotions. You need to follow through and act with resolve. Do what you say you’ll do. Make a to-do list and complete it. Don’t let your emotions run wild. There is a time and place where the heart is necessary, but when the Emperor turns up in a reading, this is not the time to brood over your heart matters. Use your head. Now is the time for logical, rational energy to manifest in your life.

The Emperor as an Obstacle

Being stiff and ridged is an obstacle that the Emperor presents. You could be in a position trapped by your own rigidity or someone you know might be restricting you. This restrictive attitude won’t help. Sometimes we need restrictions in order to thrive, but when the Emperor comes up in the obstacle position, it’s detrimental.

The Emperor as an Action

The Emperor is going to do exactly what is was doing before. He is not going to change course. If you are asking what action your love interest will take and he hasn’t been calling you, then the Emperor as an action will indicate that he will continue to not call you.

The Emperor won’t budge from his chair. He’s made up his mind.

The Emperor can turn into a tyrannical, overly-aggressive man. He can be short-tempered and abrupt.

Emperor and the Fool:

a. Father and a son

b. Boss and an employee

a. Mother and Father.

a. You hit a rock while trying to partnerup

a. Being chained to a bad business partner or deal.

b. Unable to move your position. Standing your ground in the face of opposition.

Emperor and Knight of Swords:

a. Can indicate war or military action.

b. Writing a stern and strong letter backed by the legal system.

Emperor and Queen of Wands:

a. You may want to expand your home based business. This combinations also works  with the Emperor and Queen of Pentacles.

Emperor and 7 of Cups:

a. Controlling your delusions.

Emperor and King of Cups:

a. Staying emotionally where you are.

Emperor and 3 of Pentacles: