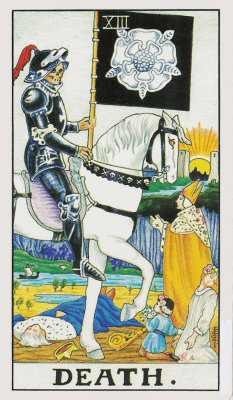 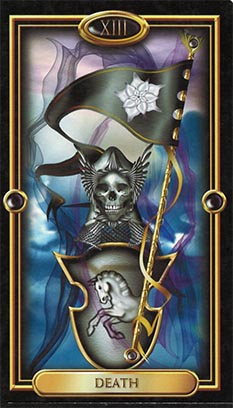 Child of the Great Transformers

We see the grim reaper in black armor riding a white horse. We see a king lying dead, a priest praying and a young maiden and child. Only the woman and child accept death. The king being dead tells us that everyone dies, no matter how rich or powerful. You have two choices you can pray and beg for death not to come like the priest or you can just accept it like the maiden.

There is a river that flows towards two pillars. The pillars are the same ones painted on the Moon card. These symbolize the dark night of the soul that we all have to walk through in order to get to something new.

The black flag is a symbol of the white, mystic rose and of the sacral spinal cord. Waite hid a lot of the true meanings to the Tarot keys at the early turn of the century. I believe that he was trying to keep the real meanings hidden from mass consciousness so that people would be more likely to accept the cards. The old age of Pisces has fallen away and we have entered into the Age of Aquarius where the true meanings of the cards do not have to be concealed anymore. The white mystic rose it yet another misleading clue from Waite. The true occult meaning is the sacral spinal cord where the kundalini energy is coiled up, waiting to be released. During actual death, through orgasmic experiences and when having an out of body experience (OBE), the energy will release itself and spiral upward toward the crown chakra.

The sacral region of the spinal cord controls the reproductive functions, the perineum, colon and the bladder. Scorpio governs the reproductive organs, bladder, perineum (anus) and the colon. Scorpio is ruled by Mars, which is a center of the spinal column, which will help overcome the idea of Death. Once this center is released the true understanding of life and death are understood as the One Love. This is a clue as to why only the Emperor lays dead in the picture, for Aries is governed by Mars and the Emperor, card 4 (1+3=4) is governed by Aries. Again, once we release the Mars energy, we die and reform ourselves. It is only then that are sight is clear. The other death card is the Tower and Mars is also assigned to that card as well. Something to meditate on!

The sacral part of the spinal cord corresponds to the first chakra and carries up the vibration energy into the second chakra. There are five parts to the flower looking spinal bone just as Death transcends the five senses. There are also five sacral bones labeled s1, s2, s3, s4, and s5.

The sun is important in the Death card. There have been quite a few arguments over whether the sun is setting or rising. In traditional occult, the sun is rising. We know this because the river is flowing to the east and the sun rises in the east. The Grim Reaper is also moving towards the east. But it really doesn’t matter either way;  it is the manifestation of the same one force. You can choose to see it either way. The setting sun tells us that death is upon us and it is the end. The rising sun tells us of cycles and a transformation into a new day.

The Hebrew letter is Nun. As a noun it means “fish” in Hebrew. In Hebrew each letter has a word meaning. In Hebrew the verb means to “grow or sprout”. I don’t know a lot about Hebrew, but when I started studying the Hebrew words and letters system in tarot I noticed a direct correlation to Arabic. Root-based consonant languages, such as Hebrew and Arabic, are very beautiful and easy to learn because when you know where the root comes from you can make other words out of it easily. In Arabic the verb is nabata (نبت ), which also means to grow or sprout. We can think about this as an association to Scorpio when we think about a child sprouting up or growing in the womb through the reproductive process.

Death can indicate something that is supposed to happen. You have no control over it happening. It will come regardless of any action that you take to prevent it. It can indicate the death of a friendship, a job, or a marriage.

In transliteration tarot, Death translates into “no” or “not”. So if you get Death with the 3 of Cups it translates as “No, you will not become friends or you will not go to the party.”

Death can also be about a kundalini sexual experience. If you asked what you wanted in a partner and got the Death card, you might want the best sex ever on a tantric level. You want sex to take you to a higher place spiritually. It could represent the orgasm as a gateway to God, source and the Universe.

Celibacy is only for the very advanced spiritual souls who understand how to use the reproductive energies in the second chakra. You can pull up this dense sexual energy and use to to heal your body. In a man this power is let out and dispelled through ejaculation. When he is advanced enough, he can learn to turn this ejaculation inward and use it to energize his entire body, thus preventing the spilling of his life-force, chi, prana. But man does not normally get to this point in one life time and it is only for the very, very advanced. For a woman, she sheds blood every month. She can also learn to pull this energy up her body and stop or limit her monthly cycle.

In both man and a woman, you can use the orgasm and pull the energy up your body. You can do this with or without a partner. In a woman, it is much easier to do since she doesn’t have to worry about spilling her reproductive life-force. In a man, this is achieved through having an orgasm without ejaculation. Again, this is for the very advanced and I have seen “tantric-dakini’s” advertising these services for men online. Most of these services are simply prostitution disguised as some sort of spiritual eastern philosophy attached to them. I do not advocate using these services. I doubt most will yield the instruct of utilizing the life force.

The Death card can be very spiritual. It may be telling you that it’s time to evolve to a higher level spiritually. In order to do this, you’ll need to leave behind an old attitude or believe.

It can also mean death of an idea or period in your life. It has to be quite a literal transformation though. You would have to cut something off that truly is dead.

People hate to hear this, but the Tarot Death card can be about someone that will truly die. Death is, after all, natural and inevitable.

People tend to fear death because literal death is the giving up of one’s body and leaving behind all the materialistic, identifying aspects to a life. We also leave behind loved ones and our relationships with them. But it doesn’t have to be scary. No one lives forever and nothing goes on forever. Death asks you to look deep inside yourself and accept change for the better. You simply cannot go on in the manner in which you are living any longer.

Death as a Person

Death to describe someone’s personality could indicate someone who has many different and eclectic friends. They are a little odd and always interesting. They have a spiritual side that they may hide from others. They have a love of knowledge and believe that they can keep knowledge in the soul through the DNA. Someone with the tarot Death card as a signifier is very good at keeping secrets. They love excitement and are different. They may pride themselves in being different and very intense. They can end up being loners.

When Death comes up in a love reading, it does not seem likely that you and your romantic partner will continue. Death is a definite, “No, it won’t work out.”

Death in love has a tendency towards obsession. They may call too many times or email excessively unaware that this is off putting. In this way, they set themselves up for a loss in the long term. The challenge with Death in love is to know when to back away and when to advance.

They feel like it’s over. Whether or not it really is over is left to be unseen.

On the other hand, it could be possible that you have sexually, orgasmic feelings. It really depends on the context.

When you see the Death card as advice, you are being asked to let something go. It might be an idea or a lover, but you might want to end things.

Death on a Mundane Level

On a mundane level, Death can indicate doctor’s visits and therapy sessions.

When Death comes up reversed it still indicates that something is over, but you may be trying to sustain a false illusion that it is alive and well. You are resisting Death with every fiber of your body.

Death Reversed indicates that there is a delay in something ending.

Reversed Death can indicate that many people are sick, but not dying.

b. A sexual experience that brings you closer to God

d. It also easily predicts the end of a relationship whether it was romantic            or a business partnership.

a. Having the emotional strength to end a friendship or relationship

b. Being diplomatic in regard to the end of a relationship/friendship.

a. An immediate change of thinking due to a wise sage or insight and self-awarness on a higher level of thinking.

a. Seeing a situation that had to end as it really is.

b. Getting a new perspective on a dying situation

c. Understanding completely why the relationship had to end.

Death and the Sun:

a. There is always a silver lining.

Death and Three of Swords:

Death and Five of Swords:

a. The End of the fight.

b. All parties are withdrawing from the fighting. They realize it’s futile.

Death and 10 of Pentacles:

a. The end of good family relationship

b. The death of the patriarch