The King of Pentacles 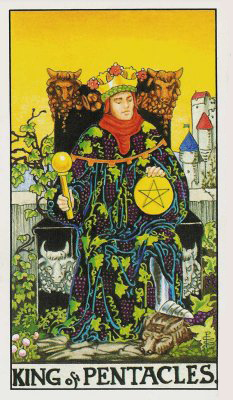 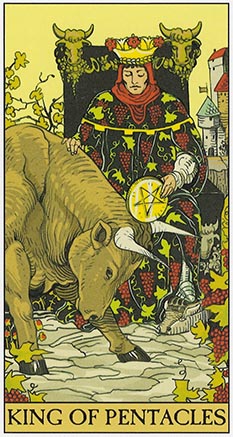 Prince of the Chariots of Earth

King of Pentacles Description and Symbolism

He is resting his foot on a bull whose horns have been removed. He has complete mastery over the land in which he works. Bulls are domesticated animals and he rules all domesticated matters. He’s not wild like a lion. He is tame and has mastered tame animals. These animals are animals that work the land. He also shows his complete dominance over the animal, by smashing it with his heavy armored foot.

His robe is lush and ornate. It looks thick and heavy. There are vines growing all over the robe and the fertile ground. This tells us that the King of Pentacles is very slow moving. He’s also fertile and abundant. This imagery reinforces the dominion over the earth.

His crown is an ornate gold with flowers and laurels. Laurel leaves stand for many things including clairvoyance, victory and immortality. The King of Pentacles wears a laurel wreath as a crown to symbolize his victory and success as king.

He holds a golden wand and a golden pentacle. We get the sense that he is very wealthy from all the decorative clothing and gold. He stares down at his pentacles because he is focused on his material success and all that he has.

The sky is yellow, which symbolizes intelligence and warmth. The King of Pentacles tends towards intelligence. He is probably educated.

He is the culmination of all the other pentacles. All Kings are the final result of their suit.

King of Pentacles Interpretation and Divination

When you get the King of Pentacles in a reading, something tangible is usually completing. The new management job, the selling of a house, or the success which comes from making your first million.

The King of Pentacles in a tarot reading indicates fulfillment and success. He is the fulfillment of your desire. Whatever the reading is about then the King of Pentacles is the fulfillment of those desires. Just look at the red roses crowning his head. We learned back in the Magician that red roses signal desires and cultivation of knowing how to manifest those desires. This king has the power to manifest and attract everything he or she sets out to conquer.

A marriage with the King of Pentacles in your reading indicates a prosperous marriage. Your marriage is well balanced and you and your partner work well together sharing ideas and the same values. If the King of Pentacles and Queen of Pentacles comes up together in a tarot reading without any other kings or queens, then you’ve got the perfect soul mate marriage. I consider this the soulmate king and queens. Why? Pentacles represent all the things that happen in the physical realm. Marriage, sex, people, houses, clothing, children, all those things are physical and are in our physical realm.

King of Pentacles as a Person

He loves structure and hard work. He is usually an established man who is dedicated to working hard. He loves the good life: luxury, sumptuous velvets, opulence, and quality. He probably drives an expensive car and dresses well. He is the embodiment of the master number 11 (He’s actually a 65/11.) Master fulfillment on a grand scale is usually applicable to the King of Pentacles. He may even be a king or head of a large international corporation.

The King of Pentacles type of man tends to be a very larger-than-life figure. He’s also very persistent. He’s the type of man that sits on the head of a board room. He doesn’t take “no” as an answer. He’s solid like the earth too, so once he sets his mind on something, he’ll go after it with full force.

He is earthy, solid and grounded. He also may love the outdoors, nature, trees, plants, and animals. Because of his relationship to the Earth, the King of Pentacles can be in any profession that relates to the Earth whether it be farming, oil, or mining, yet he is probably doing the business aspect of these field. He may be the director of an oil company, the director of a mining corporation or even Elon Musk who creates cars, solar powered technology and a pioneer in the humanitarian field.

King of Pentacles as a Father and Family Man

He is a strict father. Sometimes he works such long hours that he rarely sees them. He may set aside time for his children as if they are part of the corporate plan. In a negative sense he can see his children as accessories to his empire. He expects them to behave the best and be their best. He is dedicated to their education, knowledge and growth, but may have a tendency to view them as extensions of himself rather than individuals.

He treats his queen like a queen that can co-rule his empire with him. She is usually a homemaker since he works so much. He expects her to always have everything prepared and ready for him when he gets home. He is the boss of the relationship, while she cares for the children. If he originally married a career woman, then they are a team that work together to build their family legacy. His wife will be expected to balance their children’s needs and her career. Usually a nanny is involved in these types of relationships.

King of Pentacles in Love

In love he is slow and steady. He builds relationships that have a solid foundation. He is very sensual. He gets just as turned on when you are turned on.

King of Pentacles as Feelings

All kings indicate completion on any level. As a feeling, the King of Pentacles feels that he is complete, secure, and content. Nothing can get any better than it is now. The feeling is solid, grounded and isn’t going anywhere any time soon.

King of Pentacles as Advice

You may want to take a nature walk to get insight into your situation. Surround yourself with the beauty of nature to find comfort and inspiration. This will lead to better stability, which will result in you making a better decision.

Now is time to make that decision. As advice, the King of Pentacles tells you to make that final decision, final assessment or finish a project to completion.

King of Pentacles as an Obstacles (or crossing card)

The King of Pentacles could be an actually person in your life that is making it difficult for you to move forward. They aren’t going to budge in their decision and will make decisions behind your back that you disagree with. The King of Pentacles as an obstacle can be obstinate.

As a lover or husband, the Reversed King of Pentacles can be controlling and manipulative. He is all about me, me, me and his ego being super inflated. He can say and do cruel things, especially when he feels like his ego has been bruised. His partner will be a prize to be won. He strategically thinks about love, often to his own detriment. This is the type of man who marries only for money, so expect him to be married to a rich heiress.

He can be intimidating and can hurt other people to get what he wants. He’s always thinking about money, finances, power and control. While at a romantic dinner, they are the type to look at their phone more than you.

King of Pentacles and Emperor:
a. A successful older man will help you suceed in business.
b. Not moving or budging on your position or stance.

King of Pentacles and Chariot:
a. Boardroom boss who takes control and dictates effortlessly.

King of Pentacles and Six of Wands:
a. He puts you on a pedestal. You win. His heart is yours.
b. Everyone at the boardroom loves him. They look up to him and admire him. His words and actions are followed and imitated. They can’t do it without him and he can’t do it without his loyal team.
c. The only reason he talks to you is because you flatter his ego.

King of Pentacles and Ten of Pentacles:
a. A well run business that his children will one day inherit.