The Knight of Wands 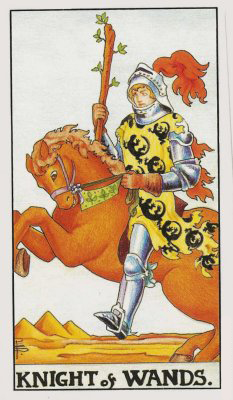 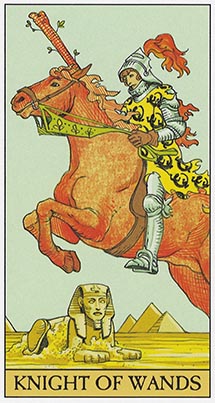 Lord of Flame and Lightening

Knight of Wands Description and Symbolism

The Knight of Wands rides an amber colored horse through the desert. The young knight doesn’t look like he can control the horse very well because the horse is rearing up with the knight clutching the rein. This action is all about jumping before you think or believing you know more than you do. Uncontrollable feelings, desires and wishes also result from the Knight of Wands.

His pale-yellow tunic and red flaming feather remind me of the Fool. Pale yellow is the color associated with the Fool. Both the Fool and the Knight of Wands, among six other cards, have red growth coming from their heads. The Knight of Wand’s growth is very different from the Fool’s bright, beaming feather. This knight’s flaming red headdress resembles a Roman soldier plotting new territory for the empire. A young, reckless Knight who is ready for the battle even if he isn’t up-to-par.

We can also look at the difference between the Page of Wands and Knight of Wands in relation to red feathers. The knight’s red clearly looks more aflame than a bird’s feather. I believe this flaming red coming from his head and back indicate a take charge attitude and a person who rushes in before they think things through. Too much action can lead one into more trouble than they can get out of.

We must remember that tarot symbolizes a journey. The Page of Wands grows into the Knight of Wands and the feathers represent that evolution. Sometimes we must explode into action in order to temper ourselves. My mother use to say, “Sow your oats while your young, and get it out of the way.” She was always talking to my brothers because girls didn’t “sow oats”, according to my father. But never mind my parent’s views on men and women, just wait until we get to the Queen of Wands 😉

Finally, we examine the tunic and typical to the wands court cards, the tunic has salamanders on it. The tail is closer to being swallowed, but not complete like in the King of Wands.

The etymology of the word pyramid comes from the Greek word meaning fire. In the Page of Wands, Knight of Wands and Queen of Wands we see pyramids, which represent the element fire of their suit.

Knight of Wands Interpretation and Divination

Expect a situation or person to be coming or going. A situation may resolve itself quickly, but your bold move probably isn’t thought all the way through and it could come as a detriment. It may even be a desperate situation where you need to make a move quickly, but don’t want too. It can also mean being outwitted or outsmarted by someone. You had a lot of pride in the beginning, but then your ego got the best of you. It’s a long fall from that horse he’s mounted himself on. Similar to the 6 of Wands ill-dignified.

The Knight of Wands can indicate cars and motorcycles. I suppose any mode of vehicle that you drive. Not to say it can’t come up for trains, I’ve just never seen this. Reckless driving, drunk driving, traffic jams, traffic accidents can all come up in conjunction with other cards in a general Knight of Wands interpretation.

Knight of Wands a Person

The Knight of Wands is all about attention, drama and sports. He loves trying new things. This type of person loves the adrenaline boosting, bungee-jumping, trapeze style, plane jumping sports. I can’t help but be reminded of the Fool the feather wears because I am positive I’ve seen the Fool as an adrenaline, free-spirited, bungee jumper too! Something to mediate on.

The Knight of Wands is always on the go. Just look at the way his horse is jumping, rear, and riding. There is action shown in the card itself. At a party, this is the type of person who moves around the room, easily converse with everyone there.

I view the wands suits as the more “popular” group. I don’t know if it’s an electric feeling I get when I see these cards or the fact that most of the time a court wand signifier is a sociable and outgoing person. The Knight of Wands is an animated person, who can wear many different archetypical personas. He or She usually has a different group of eclectic friends. If in college, he is probably the head of his or her sorority or frat. You’ll see this type being members of several clubs, including being the student body president. He might be hasty, but he’s got a plan. He probably believes failures are learning lessons on his trip upward in life.

For instance, I have a friend who was coming up as the Knight of Wands for me. I would come up the Knight of Pentacles. Two knights can often indicate conflict and we were having one of our spats. She started some gossip about me, exaggerating things and spinning stories hyperbolically. I avoided the drama as long as possible, typical of the Knight of Pentacles, while she riled me up.  I jumped on board to defend myself and unfortunately, I let a secret out about her.

This happened 20 years ago and we are still friends. We’ve outgrown the catty fights and learned to work together instead of against each other. Since then we have always had each other’s backs. I wanted to give an example of a real-life Knight of Wands that came up in my own personal reading when I was in college. I find the anecdotal notes are the easier ones to picture.

Knight of Wands in Love

When the Knight of Wands turns up in a love reading, expect to meet someone dashing and highly sexual. They are a chatter box and may ramble on and on about thing. They love you for the moment that they are wrapped up with you, but they don’t usually stay put in a relationship. If they are courting you, then expect them to be courting someone else on the side.

This type of person may brave the bar scene nightly racking up as many different numbers as they can. You will expect to see them trying to seduce as many women as possible just for the fun of the conquest.

Knight of Wands as Feelings

The Knight of Wands brings exciting, hasty, fresh feelings to any reading. Usually in a tarot reading someone wants to know, “How does X feel about me?” When the Knight of Wands shows up in this placement, expect some kind of sexual feeling. They feel hot and passionate about you, but the feeling maybe very fleeting and may not stick.

Other feelings that come with the Knight of Wands are adventurous, daring, hasty and bravery.

Knight of Wands as an Event

It symbolizes travel, especially towards exotic and foreign locations.

Knight of Wands as a Message or Offer

Knight of Wands as Advice

Knight of Wands on a Mundane Level

The Knight of Wands can represent a car or motorcycle.

He is one of the more immature knights. Don’t try dating him for too long, he loves sexual rendezvous, but unlike the knight of cups, he doesn’t care about your feelings. He is not in tune with other people’s feelings because his own feelings are so inflated. He loves acting like he’s in love, but he’s not. It’s just because he loves acting in general. “All the worlds a stage.” He always wants to be the center of attention and is often the class clown. He is popular because he reaches out to people on a superficial level. He’s not above breaking hearts and laughing in the wake. He’s a user.

Knight of Wands and Fool:

b. Traveling somewhere you’ve never been before

Knight of Wands and High Priestess:

a. Actively staying inside, while incubating and germinating new creative ideas.

Knight of Wands and Lovers:

a. A romantic interlude, without a lot of staying power.

Knight of Wands and World:

a. Rushing to finish.

Knight of Wands and Six of Wands:

b. The actor gets all the attention and praise.

Knight of Wands and Two of Swords:

Knight of Wands and Ace of Pentacles:

a. Really wanting to embark on a new business venture

b. Really wanting to get involved on a sexual level