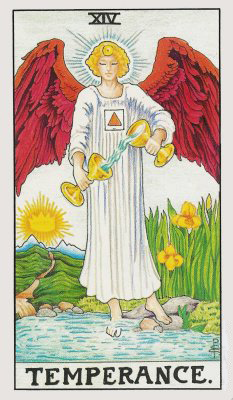 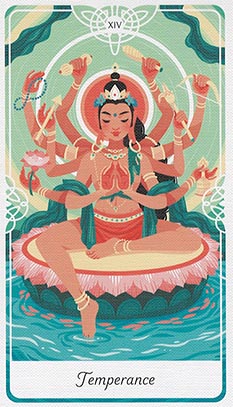 Daughter of the Reconcilers

An angel stands near a creek with one foot in the water and one foot on the rocks. The angel is blending water with water, carefully, slowly and deliberately. It is possible that the angel wants to create something new. The angel has a golden halo around her head. At the end of a path, there is another crown with a halo. This represents spiritual enlightenment.  It also indicates that you’ll need to walk down that path in order to receive the light. It is often called the Middle Path. The results you want are in the future. The halo replaces the sun.

Michael is the angel of Temperance. Michael means “who is like unto God”. This corresponds with the Tetragrammaton on the angels clothing. The triangle inside the square is the Hebrew Tetragrammaton, which means Yahweh or God.

Michael is the angel of the sun and fire. The angel has the sign of a sun on their forehead, which kabbalistically stands for the sun in Tiphareth. The path is the middle path, which urges you to live a life of balance.

In exoteric tarot, the iris indicates spiritual and mental energies. The fact that they are yellow represents spiritual intelligence. In esoteric tarot, the iris represents a rainbow or a bow [and arrow]. This also corresponds to the Greek Goddess of the rainbow, Iris. Iris fluttered when she flew, which is another indicator of the word wrath or vibration. Everything is made up of vibrations. Sound is vibration. Light passing through water is a vibration, which forms a rainbow. The Goddess Iris lead women from death to the afterlife. She is a bridge from one world to the other. One could say, a rainbow bridge. The Norsemen also had a rainbow bridge to pass to the other side.

Michael’s wings are red to indicate the solar force of fire. They also represent fire and water, when the come together they adapt.

Alchemy is hinted at in tarot Temperance. The angel Michael is blending water with water, but traditionally he is supposed to be mixing fire and water or turning wine into water. This process is alchemical; transmutation is always alchemical. When Arthur Waite had the Rider-Waite tarot cards drawn, he was very secretive about the meaning. In being so secretive, many details were intentionally left out. We get another hint at alchemy when we see one foot on the ground and the other foot in the water.

Alchemy is the process of turning one element into another element. It is the key to the Ageless Wisdom taught in many occult schools. Temperance is an important key in understand and transforming everyday objects into magical objects that increase our awareness and power in this world.

Temperance suggests blending together forces through modification. The etymology of the word temperance meant to combine and modify. Our current definition of temperance has more to do with staying away from alcohol and drugs, but at the time tarot was created the lingo of the “Temperance Movement” had not made it into everyday meaning of the word. We shouldn’t confuse the meaning of the tarot Temperance key with Temperance Movement of the Progressive Era. This movement is why we refer to the word “temperance” as refraining from alcohol.

Temperance is about blending opposites, but you’ll need patience to do this. Your goal is reachable.

Temperance wants you to know that you can blend opposites together and find harmony. You may be seeking the truth and want to discover new awareness. You are very in tune with the vibrational frequencies around you.

You may be in a situation that needs constant bits of work and adjustments to make it just right. You will need to take things in moderation and not go to the extremes.

Temperance shows the wide-open country, big skies and a relaxing healing environment that facilitates the natural flow of energy.

Temperance as a Person

You have incarnated here on Earth again to be a funnel for higher frequencies. You are probably very interested in your own spiritual development. You are probably in tune with your dreams, spirits and angels.

You are probably interested in higher education and learning in general especially esoteric information. You probably love asking questions. Temperance indicates a very inquisitive person. You may also be very scientifically inclined.

Temperance tells you that you will heal after a breakup. S/he may come back to give you closure.

Temperance is about healing. Especially talking it through with someone. Temperance people love to ask questions and fix problems. Temperance almost never indicates a reconciliation between two people after a breakup.

Temperance as a feeling allows any unrest to settle. It brings calm, knowing and harmonized feelings towards a person or situation. You may even feel like a project is finally perfected.

Temperance advises you to keep your cool and not get hot tempered.

You are being asked to redirect any negative energies into something positive. You have divine guidance at this time.

Temperance on a Mundane Level

You even may be taking a chemistry class or working at a pharmecuetical lab.

Reversed temperance can indicate drug addiction and abuse. It can also indicate someone who is heavy-handed with justice. It indicates unfair trials and tribulation.

Someone who upholds social mores that can hurt other people. For instance, a reporter who goes after a senator who is having an affair and publicizes the romance.

Reversed Temperance suggests imbalances, as upright Temperance indicates combining opposites so that a balance can occur. There is a lack of harmony and even clocks may seem to act erratically. Timing is off and you may find yourself late for an appointment or date.

Imbalances can also occur to your body in your endocrine system or liver. Your body seeks to rid its self of disruptive hormones from birth control or the misuse of drugs, whether prescription or recreational.

a. Having to go to the hospital or doctors office to get some shots or another procedure

a. You have a lot of inner harmony and musical fairies around you.  Angels are around you.

a. Moderating an intense situation

a. Art museum exhibits from around the world.

Temperance and Ten of Wands:

a. One foot in and one foot out does not create the balance you seek.

c. Even angels get bogged down.

Temperance and Three of Swords:

a. Healing after surgery

Temperance and Eight of Swords:

a. Could indicate some kind of addiction.

Temperance and Five of Cups:

a. You will heal and find a new love after a breakup. Closure is  indicated.

Temperance and Ten of Cups:

a. Families of opposites work together in harmony.

b. Opposites attract and merge peacefully and amicably together.