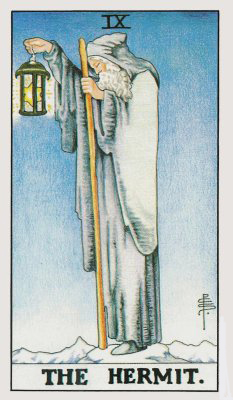 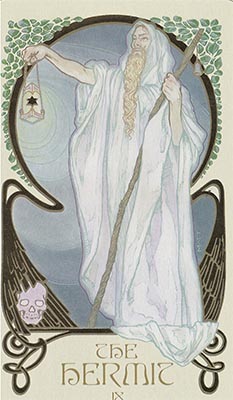 Magus of the Voice of Light

The Hermit Description and Symbolism

An old man in a gray cloak holds up a lantern and walks with a tall walking stick. The landscape is barren because he is focusing on only the light. He is truly on a spiritual quest. His beard is white and long, which infers his wisdom is vast. He also does not care what his appearance looks like anymore. He has more important things to do. The material world of beauty does not apply to him. The lantern he holds has a visible star. The universe guides his way and provides for him. To reach the heavens all he has to do is look before him. We are all part of the universe and come from the stars. The background is a darker blue, which fades into white. Dark blue symbolisms communication and enlightenment, especially when we move towards white.

In a way, he is almost like the fool again, but this time he has gained knowledge. The fools pack has turned into the hermit’s lantern, shining the way even in the dark. Much is to be gained on this quest for further self-awareness. Self-awareness will only spring from this endeavor.

The Hermit Interpretation and Divination

The Hermit is a Thoreau, who goes into the woods to write about everything he sees and feels. He walks through the woods every day, quietly practicing mindfulness, enjoying everything he comes into contact with. He is introspective, keen, and logical. He wants to analyze everything around him as it gives light.

When you get the Hermit in a reading, you may want to spend some time alone. This is not a time of loneliness, but of a time where being alone is necessary.

The Hermit as a Person

The Hermit represents someone who is analytical and insightful. They need time alone to ponder. Could indicate a physicist or astrologer contemplating a new theory.

He can also represent a person who is a little strange. He or she is above mass consciousness, who they appear ahead of their times. This presents them as a little “odd”. This time of person needs alone time to recuperate.

The Hermit in Love

If you are already in a relationship, the Hermit signals that it isn’t a good time for love. Your partner really wants time alone.

If you are inquiring about a love interest, the Hermit warns that he or she is extremely picky about who they choose to be with. They will want a lot of space and may even want to have separate rooms or live apart indefinitely.

The Hermit for Feelings

If you get the Hermit in the “feelings” placement then your love interest feels like being alone. They feel deeply introspective and probably very happy about being alone. There may be a breakup in the future if they are feeling the Hermit energies.

If the Hermit comes up for your strengths, it means that you work great alone. You may also be bestowed with spiritual insight and inner intuitive guidance.

The Hermit is on the top of the summit, which we can see in the distance on the Fool card. He has reached the highest point in the lower minor arcana. As advice, the Hermit wants you to take the higher road. You have the lantern, the star, that can guide the way for others. If you are in a conflict with someone, show them the path. People are always looking for the something more inside of them, but are sometimes unsure of how to find it. The Hermit can show you the way.

Another important piece of advice that the Hermit bestows on us is that of study. He is a studious, self taught person. It could be asking you to study ancient texts, ancient scripts or take an educational route that is not under mass consciousness.

You may be feeling self-pity and self-doubt. You need time to withdraw from society, friends, and family, which is not the best option, but it’s how you feel presently. You are suffering with loneliness and isolation.

The Hermit reversed suffers from hypochondria. He or she may think that every little spot or mark is sign of death.

a. studying for a big exam

a. Earth based plans are canceled such as a lunch, a date, or anything physical. This comes to a relief to you, so you can spend time alone.

a. No matter how old, you have to keep a young heart

b. The old man brings sunshine and joy.

Hermit and 8 of Wands:

a. Journalism or short story writing

a. Knowledge can create a burden.

b. You know so much that it becomes heavy trying to get people to see things your      way.

Hermit and Page of Wands:

a. Being alone is an active activity.

b. Getting a lot done alone and in a short amount of time.

Hermit and 8 of Cups:

a. Walking away from a relationship.

b. A break up where the person would rather be alone than with their partner.        It doesn’t have to be final.

a. Being content and dreamy all on your own.

Hermit and 5 of Pentacles:

a. Being out in the cold.

b. Going down an alternative spiritual path.

Hermit and 6 of Pentacles:

a. The old man is generous with his money.

Hermit and 9 of Pentacles:

a. The older man thinks highly of the rich single woman.

Hermit and Page of Pentacles:

a. Giving a lot of time and thought into important matters.

b. Writing a long letter to someone with thought and attention to detail.