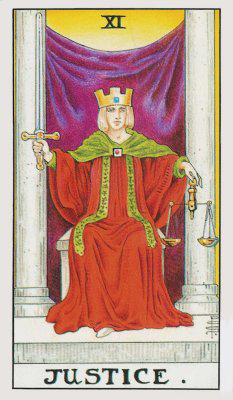 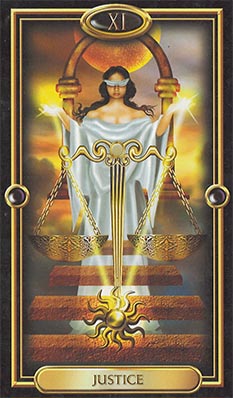 Daughter of the Lord of Truth

The woman in the Justice tarot card looks like a judge. She is holding a sword so she can cut to the heart of the situation. The sword represents discrimination. She can easily look into a situation and see the truth. Her truth is balanced by the gold scale she holds in her other hand.

She sits behind a purple backdrop that is supported by two pillars. The backdrop represents her protecting the verdict. It also assures you that behind the background are the karmic retributions working behind the scenes. You know they are there, but you can’t see them. The yellow background behind the curtain connects Justice to the Sun. If one wants to delve further into that esoteric meaning, please feel free to do so.

The two pillars represent duality. They are the same pillars seen in the High Priestess. It’s no coincidence that Justice is numbered 11, which reduces to the number two, the number of the High Priestess. The pillars in the High Priestess are black and white. If we mix black and white together, we get gray. Both pillars in Justice are gray in color to represent synthesis and balance. You are able to take what is from above and synthesis that from which is below. Your higher mind is completely in tune with the reality around you that is coming from within.

Or perhaps the double 1’s indicate that the Magician is at play. Here we see the combined efforts of the number 1 and the number 2 (1+1=2). We have conscious and subconscious completely synthesis. Here is another example of the synthesis that takes place within the balance of Justice.

Justice is similar to cause and effect, which is commonly known as karma. Everything you say or do has ramifications, whether they are small actions or large ones. Justice reverberates karmic principles.

The Justice tarot card brings in a sense of balance. Anything that is symmetrical is important. People with a good eye for design usually like things to be symmetrical and know the importance of it creating a relaxing atmosphere. Likewise, our bodies are very symmetrical and a truly symmetrical face is seen as the most pleasing.

Justice isn’t concerned with revenge. There is an undeviating justice in the universe that comes back to us. These are good times to look at the lesson Justice is teaching us.  The Justice tarot card is not concerned with man-made laws, but with giving you back what you’ve put out. Justice deals with Universal laws that govern our universe.

The regal woman in Justice does not care if there is loophole in the law that allows someone to get away with a crime. Eventually, justice (not revenge) will be doled out for the individual.

If you are asking about a legal question then upright Justice is a good omen, while reversed Justice indicates an unfair trial. If you do not read reversals then look for surrounding cards. The 5 of Swords or the 7 of Swords next to Justice might indicate a bias in a court proceeding, while the 6 of Pentacles and Judgement would indicate fairness.

My own personal belief is that no one should act as Lady Justice. Meaning that if you know someone has committed a crime or injustice, it’s not up to you to act as their judge and issue a payment or penalty.

Justice does not recommend you go out and try to make things fair again. If someone steals from you, do not steal something of theirs trying to make it fair. Justice is less of a physical person and more of a vast network of spiritual energy that balances itself out behind the scenes. Just look at that curtain behind Lady Justice? Whatever is behind that curtain is where the karmic retributions work themselves out. You can’t see it, but it’s there.

The Law of Polarity is expressed in the Justice card. The double 11’s representing the back-and-forth nature of duality. The clearest example is cold and heat. What feels cold to you is only relative to you. Someone who lives in a tropical climate at 90 degrees everyday will have a different interpretation of what it feels like to be cold. Given this interpretation, allows us to understand that there is no absolute good or evil. It is all relative. Read more about the Law of Polarity in the Kyballion.

Since Justice rules over Libra and Venus rules Libra, there is a direct correlation to symmetry and art. Someone whose signifier is the Justice card will love everything that is beautiful and simple. They have a keen eye for observing minute details. They probably love art in some capacity.

Justice as a person wants everything to be balanced and harmonious. A bad side to this is that they often feel their side is correct and don’t understand why others wouldn’t take their well thought out advice, and yet they can easily fall right back into line with understanding that people will learn at their own rate. They can be very forgiving and understanding.

As a person, Justice likes to come at a situation from all angles. They weigh all the pros and the cons. They most likely make lists and finish them. They will even do this within a relationship. They are not a person to quickly jump into a relationship, but when they do, they will give their heart totally. They are always looking for someone who truly complements them.

They can be very good with words, such as the sword they hold represents. Some may write long love letters taking the time to reply to e-mails in detail.

Justice people are romantic. Don’t let that cold sword and the name of the card confuse you. Diplomacy is easy for them. They love balance in a relationship and like to weigh and divide everything up, which isn’t a bad thing if both people are business minded.

A person who has a signifier as Justice may get married later in life in their 30s or 40s. They may even have several earlier relationships as “tests” before they find the “one.” But once they do find their truly equal match, they will partner for life.

Justice can also portend a wedding in the courthouse and is favorable in the outcome position when surrounded by supporting cards such as the Three of Cups or Four of Wands.

Though, Justice in a love reading needs to be examined carefully. There could be somethings that need to be balanced out from previous lifetimes or current ones.

Friendship in marriage is very important to Justice in love. They are very discriminating in who they partner with. Justice in love has a tendency to start out as friends first and lovers later. This is because they need their mind nurtured above all else.

A Justice romantic looks for a union that is equal. They could be quite good at business and philanthropy and want to share a business with a partner. They need their mind nurtured by their partner and expect their partner to share with them all aspects. They have a desire to “know” everything about their partner and will forgive and understand anything and everything.

Justice in love requires the querent or the querent’s love interest and/or partner to really weigh up the relationship. If Justice comes up in a romantic reading there is a high probability that the relationship wouldn’t be a lustful, head-over-heals, whirlwind romance, but you need to look at the surrounding cards.

Love in a relationship context is never a one-way street, it has to be reciprocated. If you or your love is not being reciprocated and Justice comes up, it might be time to move on.

Beware when Justice does show up in a love reading because it is often a sign of some kind of karmic ramification. For example, I know a few women who married for money. After their divorces, they kept running into men who weren’t as wealthy as their ex. For them this didn’t matter as much because they were financially set up through alimony or child support checks. These women were looking for their true partner and true soul mate now. Unfortunately, Justice didn’t see it this way and sometimes a man would use my friends either for their money or sex. In this instance, if Justice comes up as feelings the feeling is one of equilibrium, equality, equalization. The universe is balancing things, so you may feel very equalized and this is either good or bad depending on what seeds you have sown.

I also had Justice in a love situation, which was not to my liking! I had a brief romance with a man who was very in love with me when I was 20 and 21-years-old. I had many excuses as to why I couldn’t get involved with him. Some of them were extremely superficial. I think it was my immaturity that really prevented me from being with him. One night I started a fight with him and told him something I shouldn’t have told him. I heard my inner voice (hierophant) and completely ignored it.

Fast forward to 2015 and we met again. I had not seen nor thought in depth about him for 15 years. Now I saw what I could not see 15 years prior. He saw it 15 years ago, yet I failed to see it. Now he was standing in front of me and I saw it and I knew what I had lost because of my lack of guidance. The Justice card kept coming up over and over and over again as if shouting to me, “The seeds you have sown have now blossomed.” He wouldn’t forgive me for what I had done, nor did he forget. It was a big lesson for me because I knew the reason why we could not be together was because of the karma that I had created years ago.

Justice in tarot brings feelings of equality, balance and symmetry. In a relationship reading, this can go either way depending on what seeds you have sown because Justice is also about cause and effect.

If you are asking how a lover or boyfriend feels about you then they feel balanced and in harmony. They feel as if they have met their perfect match and they are equalized. It is a very harmonious feeling.

If you are asking how someone feels about you romantically and you aren’t dating, then Justice means they are weighing you up. This card doesn’t bode well in a feelings position if you are looking for love.

Justice advises you to take a more legal approach to life. Process the facts and make a strong decision. Justice rules Libra and Libra is an indecisive sign. Justice urges you to make that decision with love and kindness.

Justice as an Obstacle

The word assigned to Justice is “Lamed”, which means “work” and “education.” When the Justice cards comes up in a reading there is an imbalance. You may be caught between trying to balance work and your educational needs. As an obstacle, you will have a hard time doing this.

Reversed Justice can be about being in a legal situation where the guilty get away with a crime or where someone who is innocent is being prosecuted as guilty. For me this is the biggest meaning of Justice reversed in a general context.

Justice is also about balance, so Justice reversed is about imbalance.