The Queen of Swords 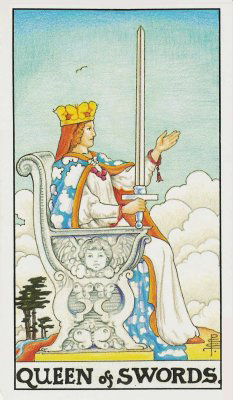 Queen of the Thrones of Air

Relates directly to Justice. She rules over the 2 and 3 of swords.

Queen of Swords Description and Symbolism

The Queen of Swords sit high above the cloud line. She rules the sky and air. The sky behind her is a beautiful blue with one lone bird flying high in the sky.

Her crown is encircled with golden butterflies, which symbolize metamorphosis transformation and flight. She is wearing a blue cape with puffy white clouds all over it. Her dress is white, which suggests she is pure in thought. Around her wrist is a Victorian tassel which is a symbol of a widow. She knows a sorrow that only a widow could know. She is young and must have had to endure widowhood at a younger age. This suggest maturity that is beyond her years, but also a great deal of sorrow.

The trees are up right. The wind does not blow them around like the Page and Knight of Swords. They remain erect and solid. For she is very solid and can appear calm. But like the air she is ever moving and changing. She could very well be described as aloof.

Next to the trees are a small river flowing down a small hill. She is a queen and queens rule the watery emotional world. The small river suggests that she remains mainly unemotional about life and situations. It also suggests that she rarely shows her emotions. When she does it’s going to be for a good reason. She carries her sword of justice straight up, dividing her center where her heart is. This suggest that she makes decisions that are for the good of all involved. Her decisions are never drawn from her emotions.

She rarely has time for love, but seeks the truth above all else.

Queen of Swords Interpretation and Divination

When the Queen of Swords comes up in a reading, it indicates sadness. A friend might call with news of a separation or you might be separated from a loved one. This love cannot be rescued and you’ll have a sense of doom and dread.

New plans and new business deals won’t get off the ground. You will try and try, but nothing works.

You will get news through the mail and it will make you sad. You feel empty and would love to cut out all the emptiness in your life, but can’t. The dreadful feelings linger and persist.

You could win a tournament in chess or computers. Your mind if very sharp right now and connected to your intuition, but you tend to look at the past and cry.

Someone is plotting to take you down and probably will. A best defense is the offense. Prepare for battle, especially one of the mind.

The Queen of Swords in a reading generally denotes sadness and misery.

Queen of Swords a Person

She is the king’s widowed sister. She is the only queen who is not married to her king. She rules the airy realm of thoughts. She is sharp as a razor and can cut to the heart of a situation very quickly. She has a built-in bullshit detector, to quote Hemingway.  People who deceive her are in for a big surprise, because she loves the truth and is quick with her sword. She might tell you what you don’t want to hear, but it will always be the truth. She is like justice, she wants the truth above all else.

But beware for she can appear superior and a “know-it-all”. She can come off to others as cold and arrogant. She has the least amount of friends, but is a good ruler. People fear her, but also accept her reign.

The Queen of Swords comes from a dark place where she has seen the darker side of life. But she survived, which makes her swift and astute. Her experiences have built her.

Queen of Swords in Love

The Queen of Swords in love is a no nonsense woman. She loves with her mind almost all the time. Once she’s made up her mind that you are the one or you aren’t the one, she sticks with that decision. If you are trying to get involved with a Queen of Swords type, you must be as intellectual as her. A witty sense of humor and sarcasm might make her warm up to you.

If you break the Queen of Swords heart, she may mourn for about five minutes before she picks herself back up and finds other things to think about. She’s not one to sit around and wonder where and what former lovers are doing. She is mind over heart and will cut you out of her love life quickly if she feels it’s getting too emotional.

You or someone you know may feel indifferent to a situation. It can even signal the friend zone.

If you are asking about your romantic partner’s love interest, the Queen of Swords isn’t the most welcome card. He or she feels aloof and calm. The sword she is carrying is dividing her heart, remember? In this sense, she is like the Two of Swords without the blindfold. Her feelings for you are most likely there, but she (or he) won’t come out and say it. They are guarding their heart and there really isn’t a way to get into it.

The Queen of Swords urges you to take a calm and cool approach to a situation. Do what is good for everyone, not just one person. Do not make a decision based on an emotional response. Remove your emotions all together. This isn’t the time to become overly emotional about someone or something.

You don’t want to meet or know the reversed Queen of Swords. Her core is wicked. When she is reversed her sword of truth and justice falls to the wayside and we may find criminal behavior. She does manipulative things to people and usually for power or for fun. If this woman comes up in a reading be very, very careful. You may want to distance yourself completely.

The Reversed Queen of Swords can indicate someone with a mental illness such as a personality disorder that makes them devoid of empathy, compassion or honesty. They most likely have a blown up ego that only exists in their head. They are the type of person who babbles on about how wonderful, magnanimous and smart they are when they really aren’t. They are unable to see past their own self induced mental prison. This is the type of person who usually says something like, “She doesn’t like me because she’s jealous.” When the reality is the person doesn’t like her because she’s a back stabbing bitch.

The reversed Queen of Swords is usually a thief, con artist, gold digger and can even, on occasion, indicate a murderous black widow.

Queen of Swords and Hermit:

a. Being alone helps the lady think clearly.

b. The teachers at the university have insight.

Queen of Swords and Justice:

a. A female lawyer is impartial and very fair.

Queen of Swords and Knight of Wands:

a. If there is one person who can ruffle and irritate this queen, it’s the Knight of Wands. She just doesn’t have time for his antics.

Queen of Swords and Knight of Cups:

a. She thinks with her head, not her heart, but the young chap is somewhat amusing to her.

Queen of Swords and Seven of Pentacles:

a. Feeling stagnate about old ideas.

Queen of Swords and Eight of Pentacles:

a. Doing any intellectual activity over and over.

b. The utilitarian woman doesn’t waste anytime when it comes to work.

Queen of Sword and King of Pentacles:

a. Making new ideas a reality.