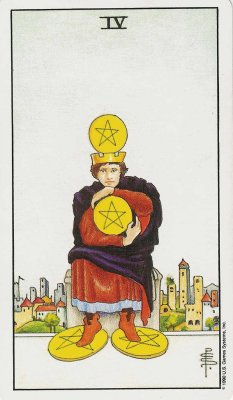 Four of Pentacles Description and Symbolism

A man sits on a cold stone bench hugging a large pentacle against his chest. This person is using a pentacle as a shield to their heart. There are two additional pentacles under his feet and he balances the final pentacles on top of the crown which resides on his head. Behind him in the distance are compacted city buildings that rise past the height of a small mountain. This represents man’s conquest over nature, which is a prevalent theme through out American history (see Teddy Roosevelt’s building of the Panama Canal).

The Four of Pentacles is a stage card. If you look at the bottom, you’ll see a line that resembles a stage. There are several cards in the Rider-Waite-Coleman deck that have a stage in them. Like a theatrical play, it shows us that not everything is as it seems. There are parts of life that aren’t as real as others. So even though this man looks like he has it all, he is really pretending that he is richer than he is. He hasn’t gained the mastery over the material world that the King or Queen of Pentacles embodies.

Four of Pentacles Interpretation and Divination

The Four of Pentacles main meaning is the inability to let something or someone go. It’s holding on to something whether it be money, a secret or a person. It can indicate obsession.

You also may be very thrifty with your money and refuse to spend any penny. You reuse and pinch pennies whenever you can. You may even hoard items and never let anything go. You keep every little memento and even think about keeping old shoe boxes so you can reuse them later.

The Four of Pentacles can describe someone who guards their heart. They don’t want to let anyone in emotionally, so they fill it with work, money, power, which they think brings them stability. They won’t reveal their cards until you reveal yours. And if you do reveal your feelings, they may not reveal theirs anyway.

You may be working hard to get the financial success that you desire. When you get the Four of Pentacles in a reading know that success is yours. You have built a solid financial structure which is strong and grounded for success. The Four of Pentacles suggests that you have the business spirit. But like the four’s, this is only the beginning of stage one. There may be a tendency to obsess over money and work while ignoring matters of the heart.

Four of Pentacles in Love

In love the Four of Pentacles can go either way:

In love in can represent a controlling spouse. They may even view you as a possession or commodity and not want to share you with anyone else. You maybe viewed as the “trophy”. They may need to “know” everything, but they do not reciprocate. They need to know where you are and what you are doing. If you are stuck in traffic and running late, they may call and demand to know where you are and why you are late in an accusatory voice. They are insecure, but hide their insecurity behind power struggles. They are so afraid to open up completely because they never want to be vulnerable. They live in a fear, but are afraid to even acknowledge their fear. Look for the King of Pentacles reversed to support this. It’s common for the Two of Swords to also show up in a reading along with the Four of Pentacles as a supporting card.

But in love it can also represent stability. You are the pentacle to them. They love you and only you. They want to be closed off from the world for the weekend and just hug you. You probably love these types of relationships. You don’t want to feel “free”. You two are the type that love being in the relationship zone. Spontaneity and a high romance full of dramatic sexual interludes are NOT your thing. You prefer stability, comfort and mutual closeness more than anything else. You will always do what you say and so does your partner. You are reliable in a relationship. But be careful if the Devil shows up along side the Four of Pentacles because in this instance it may mean obsessive relationships that end up not being healthy.

If you are not in a relationship and are asking about a potential relationship, you may keep insisting that they will be yours someday. You keep holding on to the idea of them. You may be very structured in your thinking. The Four of Pentacles can indicate being a little obsessed with a person or an idea. You just can’t seem to let it go. You look straight ahead and ignore other options. You have to realize that they may not really be interested in you or they are closing their heart and mind off to you. If the Eight of Pentacles comes up they are hard at work and may not be thinking about love.

Four of Pentacles as Feelings

You may feel closed off from your romantic option. You want to keep your feelings to yourself and do not feel like sharing. On the other hand, you may feel obsessed about someone and can’t get them off your mind.

Four of Pentacles as Advice

Four of Pentacles is advising you to hold on to your money. Save and don’t spend at all. Think of creative ways to pinch pennies right now. If you are working, stay focused on your work and get it done in an efficient manner in order to maximize your output.

If the advice does not have to do with money, it could indicate that you should keep to yourself. In love, you should stay reserved and listen to the other person talk. Do not share too much. Guarding your heart will provide stability and reveal more at a later time.

Four of Pentacles as an Outcome

In romance, you or someone you desire will remain detached, hidden and guarded. You won’t be able to form a union. Things will start to dissolve around you while you look for a new approach to a situation.

Four of Pentacles on a Mundane Level

On a mundane level, the Four of Pentacles can indicate that someone wants to hug you or you want to hug someone.

The Four of Pentacles can also indicate plumbing problems and even constipation.

The Four of Pentacles reversed is when you finally let go. You may let go of blocking your heart in regard to a relationship and try and open up a little bit.

On a negative side of letting go, you could sell off stocks, bonds or commodities. You let go of the materialism that could possibly be keeping you in chains.

Four of Pentacles and the Devil:
a. Holding on to a vice whether it be drugs, sex or gambling.

Four of Pentacles and Six of Wands:
a. It’s all about me and not about you.

Four of Pentacles and Six of Cups:
a. Holding on to the past.

Four of Pentacles and Seven of Cups:
a. Holding on to the idea or illusion of a love interest.

Four of Pentacles and Eight of Cups:
a. Long walks with lots of hugs.

Four of Pentacles and Nine of Pentacles:
a. Not allowing anyone to enter your world.
b. Fear of people taking what you’ve worked for.