The Seven of Cups 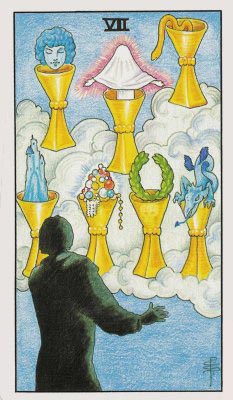 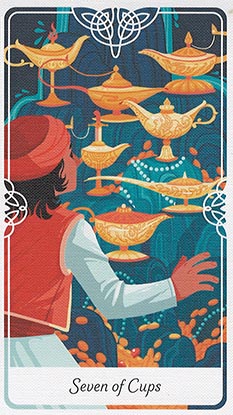 Seven of Cups Description and Symbolism

The clouds hold seven cups all full of different items. The number seven can represent many things on an esoteric level: seven ancient planets, seven interior stars (chakras), the seven seals and seven trumpets in Revelations, and so on. What can you find?

A shadow figure that resembles a man stands with his back towards us facing the cups. The fact that the cups are all in the sky, surrounded by puffy clouds suggest that all you know is up in the air, it’s in the sky, and it may very well be unobtainable.

One of the cups contains a castle, which gives way to the idiom, “Building castles in the sky”, which is exactly what the people in the Tower card did. They built their tower so high that it ended up crashing to the ground. The Tower and this cup are represented by Mars, the planet of war and aggression. The number 16 also reduces back to 7, so this is a perfect representation of the how the negative energies of the 7 of Cups can manifest.

The next cup is overflowing with jewels, which can represent hunting for that perfect treasure. This card is represented by Jupiter because he is the king of all kings and the planet of luck, royalty and abundance. Jupiter is represented by the Wheel of Fortune and there is a fortune in that cup.

The next cup has a laurel wreath and a skeleton face. Laurel wreaths represent victory because the ancient Greeks would crown the victory with a wreath of laurel leaves. This cup mimics the World card and the circular wreath that encompasses completion. Saturn is the planet the corresponds to the World card, but Capricorn is ruled by Saturn and The Devil is ruled by Capricorn. Saturn, the planet of limitation, can be used for good or for bad.

The fourth cup contains a dragon, which breathes fire like the sun. This brings us back to the Sun card and represents the solar energy. Solar energy can bring forth life and fresh vegetation, but it can also burn and destroy.

On the top shelf of the cloud, only three cups remain. In the center is a figure with a white cloth draped over him/her. She is represented by the High Priestess because she is holding the veil between this world and the astral world. This cup holds the Moon.

The snake to the right of the veiled woman symbolizes Mercury and the Magician. This cup represents an ouroborus, which is a snake biting its own tail. And of course, the Magicians magical figure 8 reminding us that the universe is really a gigantic infinity sign swinging back and forth.

The last cup holds a beautiful woman’s face, which represents the Empress, Venus and beauty.

The cups have multiple choices and some of them are not based in reality.

The Seven of Cups warns us not to give in to temptation, seduction, or addiction. These are temporary and not built on a solid foundation. The Rider-Waite version of these cards shows seven cups filled with different choices. The cups are floating in the clouds. The clouds represent illusion and the choices are our choices in everyday life.

The Seven of Cups indicates being intoxicated with illusion, glamour, daydreams, and building castles in the sky. You may not even be able to see reality. This can also indicate drug addiction because when we are high, nothing is clear and nothing is real. Illusions are easily built.

The Seven of Cups can indicate having no direction because of too many choices. Perhaps you are sitting around daydreaming too much.

The Seven of Cups can indicate that your financial position maybe built on false beliefs about money.

The Seven of Cups is similar to the Devil and the Moon.

Seven of Cups in Love

In regard to love the Seven of Cups suggests that you are daydreaming about something that isn’t there. This might be the “He’s just not that into you,” card. You’d rather be wrapped up in fantasy and illusion.

Another approach to the Seven of Cups in love can indicate that you are falling in love to fast. It can be an illusion when you do this. It isn’t built on anything solid and you have a feeling of “walking on air.” Love like this usually ends as quick as it starts.

Seven of Cups as Feelings

You may also be feeling like you have too many choices and all of them look good. It’s like going into your favorite restaurant and not being able to decide between which meal to order, so you end up order two appetizers, one entree, order for your spouse so you can share with them and finish that off with a dessert. You order too much food and get to take it all home in a doggie bag for later.

Seven of Cups as Advice

As advice, the Seven of Cups could be dependent on its Venus in Scorpio aspect. Rely on your sexy, seductive side to spice up your life.

On a normal level, the Seven of Cups as advise is asking you to make a decision. Get your head out of the clouds and look at the situation for how it really is. Ask yourself some important questions about your boyfriend, colleague, wife or children. Are you seeing things as they really are or are you imagining them the way you want them to be? Don’t place your impression of people on them, allow them to show themselves to you.

Seven of Cups as an Obstacle or Crossing Card

You might have an unexpected delay. This could be caused by someone not following through. You will have to take a step back and reassess the situation. Plans fall through and don’t materialize.

You could come to the conclusion there isn’t real substance in your life, whether it’s good friend, a stable family or a long-term relationship.

Seven of Cups as an Action

The Seven of Cups can be a card of inaction. A person tries to fit all the options into their life and ends up making a mess, so they decide to make no decision at all.

You could be searching for the truth among all possible options.

When this card comes up as the action you should sit back and really think about what you want because not all those choices are good ones.

The Seven of Cups Reversed as an action could very well foretell that you take your daydreams, meld them into one path and choose that path. When the Seven of Cups is reversed it’s a good card for action because it symbolizes that the querent does end up taking action.

The Seven of Cups Reversed indicates an ending to the illusions. It corresponds directly to the emotional state of the Chariot: having control and direction.

In love, the Seven of Cups Reversed can signal unrequited romantic feelings.

Seven of Cups and Hierophant:
a. Dreaming about marriage.

Seven of Cups and Lovers:
a. Many choices regarding love.
b. Being swept up by love.

Seven of Cups and Moon:
a. Madness.
b. Creativity fueled at night.

Seven of Cups and Seven of Wands:
a. Worry over imagined reality.

Seven of Cups and Nine of Swords:
a. Possible drug addiction and withdrawal.
b. Sleepless nights due to confusion over a decision or multiple choices.

Seven of Cups and Four of Pentacles:
a. Protecting yourself against illusion.
b. Even though you have a lot to work on, you should keep consistent. This is the way to succeed.