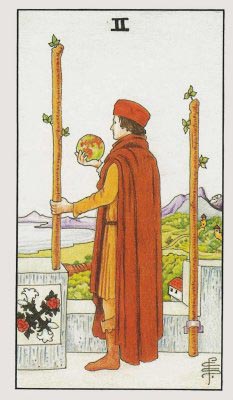 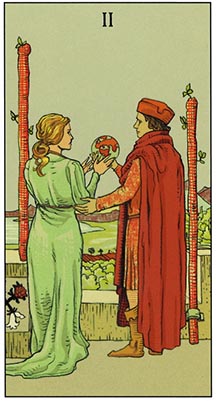 After Tarot Deck by Corrine Kenner

Two of Wands Description and Symbolism

A man stands looking out to the sea. He is holding a globe in one hand and a wand in the other. The second wand is bolted to the ground. He cannot move it. The wands seem a little unstable as both of them need help standing. These wands are not firmly rooted in the ground. The man is facing the sea and the mountains, as if he is surveying more territory he would like to conquer. This indicates that he has a vision that he wants to pursue.

Both the globe and the two wands are reminiscent of the Emperor’s ankh staff and his orb. The gives the man depicted in the Two of Wands a king like quality. It is no coincidence that Aries rules both the Two of Wands and The Emperor.

The orb was often used in coronation ceremonies that would grant the monarch rulership over his kingdom. The man in our Two of Wands depicts rulership, dominion, and authority over his empire.

The globe is round and fertile, which infers nurturing an idea. The globe is symbolic of having “all the world at your fingertips.”

In relationship to the Tree of Life, fire is at home in Chokmah/Wisdom. We have stable and wise energy.

The Two of Wands encompasses the number two, fire, the planet Mars and the sun sign Aries. This is a good combination of elements. Every one of them is happy. Mars rules over Aries, so we have a natural allegiance for this card. Wands symbolize fire and this completely complements Aries and Mars’ fiery nature. The Two of Wands really gets the ball rolling in the most productive way. This guy knows what he’s doing, he just may need some time to think and reflect about it. He’s in the part of the story where he is writing the end of the business plan and about to make a decision about his next move. Some of the tasks have already been implemented. Here is a picture of a man who has a solid to do list.

Two of Wands Interpretation and Divination

The Two of Wands is a moment of pause and reflection. You are unsure about someone or something. You most likely have two roads you can go down. What makes this decision hard is that both decisions are good.

You could be preparing for a journey, partnership or acquisition. You have applied the raw power, you just need to make a decision and go. This card comes right after the aces. Now that you’ve realized that you have the power to do something, you are cautiously preparing for it, whether it is writing the plan, organizing the team, designing a new home or even redecorating.

The Two of Wands may indicate real estate. You could be in the process of looking for houses or new property to buy. There is a likely chance that this will be an investment home. You might be thinking about rent a basement apartment or knowing that the equity will send your kids to college. The fire in the Two of Wands definitely indicates foreign property or traveling somewhere exotic. You have many options, but you are being careful. You prefer to think things through before making major financial decisions.

Two of Wands as a Person

A Two of Wands person is self-assertive, direct, and good with money and real estate. They are brave and can be quite valiant in their endeavors.

Business comes naturally for a person whose signifier is the Two of Wands. They are most likely an entrepreneur and it is extremely possible that they are very powerful and intelligent.

There is a big possibility that this person is foreign or has an international business.

On the downside, they can become very self-absorbed and if not reigned in they can make war by being too bold and angry. They may have a temper.

Two of Wands in Love

In love, the Two of Wands predicts that a decision is about to be made, but right now there is a pause. This is a time to reflect on the relationship and where it is going next.

If you are in a relationship, the Two of Wands could suggest that you two are planning a trip.

There is a big possibility of meeting someone foreign or the person you are involved with is foreign. They could also be from a very wealthy family.

Two of Wands as a Feeling

You are feeling indecisive and pensive.

You may have a longing to be with someone.

If these are business feelings you could be strategizing on how to get someone or a group on board with your plans, so there maybe a constant nagging feeling that you are not doing all that you could be doing. You want everything to be perfect.

Two of Wands as Advice

Look at the bigger picture. Whether it be writing it out or talking it through, set a solid foundation for the future.

Be patient and make decisions only after all thoughts have been extinguished. This is not a good time to make rash decisions. It is a good time to take survey of all that needs to be done.

The Two of Wands reversed could also represent that another person is in charge of your life. Perhaps a father, brother, or husband is using their power to control you. In this instance, you are the globe and they are the man.

The Two of Wands Reversed suggests that you are doing business with a very underhanded person. They are highly manipulative and have an explosive temper.

The Two of Wands Reversed may indicate that you have a lack of resources. This can cause major depression and financial loss.

2 of Wands and Death:

a. You have a choice between two things, probably work related obligations. You choose only one.

2 of Wands and Moon:

a. Lies and illusions in a business deal.

2 of Wands and King of Wands Reversed:

a. Business with an unmotivated, lazy man is a bad options. b. You are not putting enough effort into your decisions. Things don’t come to those  who don’t act.

2 of Wands and Ace of Swords:

a. Writing to someone overseas.

2 of Wands and Knight of Swords:

a. Can indicate a lawsuit.

2 of Wands and Ace of Cups:

a. Writing and yearning to be with someone who is overseas.

a. Talking and connecting with someone you love or like about new business opportunities.

b. Talking or discussing a new real estate move.

c. Trying to decide between options.

a. Undecided and discontent with all the many options.

a. You get your wish and get rewarded with financial success.

2 of Wands and King of Pentacles:

a. Contemplating business decisions over seas.