The Page of Wands 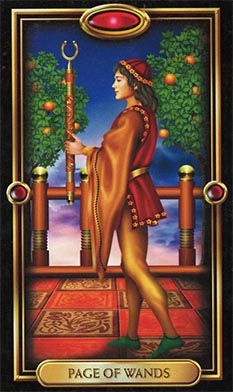 Princess of the Shining Flame

Rose of the Palace of Fire

Builders of the Adytum Zodiac: Aries/Taurus/Gemini

Page of Wands Description and Symbolism

The Page of Wands looks like a child with shoulder length auburn or reddish blonde hair. For a hot desert, she is wearing heavy garments. Her dress is yellow with black salamanders on it. The salamander is trying to eat its tail. This gives it a circular shape. Salamanders are featured through out the Suit of Wands. The salamander shape does not close completely, which represents having much to learn. She also wears heavy draped orange and red scarves that reach down to her yellow boots. The fringe around her boots looks like flames. There is also a rope that rests on her shoulders, but is mostly hidden by all the fabric.

She is wearing a white hat with a small brim. There is a re d feather coming out from the side of the hat. The feather may speak to the Page of Wands lofty ambitions to reach the sky and even transcend the material world. Feathers also symbolize travel and speed, which is exactly what pages in the tarot represent: messages. Feathers are used by the ancients to invoke the Gods of the Sky and to communicate with the spirit world. Specifically, in tarot red feathers represent human’s evolution from the vegetable kingdom into the human kingdom. If we look at the difference between the red feather on the Page of Wands versus the Knight of Wands, we can see that the red feather certainly grows and flourishes from page to the knight. The Knight of Wands also symbolizes messages, but on a much, much larger scale as indicated by his gigantic flowing feather.

There are three triangular pyramids in the background. The hot, red earth looks dry and cracked. The entire picture is colored with reds, oranges and yellows of varying degrees. The ground is a plethora of different shades of red all having a defined border. They move like wavy lines around the three orange pyramids in the near background. Reds, oranges and yellows are desire, passion, action, will and movement.

The Page of Wands looks intently at her wand. She holds it erect and motionless as she tilts her head slightly upward. Perhaps this indicates that she is always ready to rise to the challenge. She is a very determined girl.

Page of Wands Interpretation and Divination

The Page of Wands is the fire that sparks the creativity. It is the foundation (Malkuth) that supports the rest of its suit. It is the condensed energy that is raw, pure and unadulterated.

You desire to expand your spiritual mind. You have many activities lined up. You might want to try on several different things to find the one that fits.

You are going to get a very pleasant surprise visit, letter, or phone call. Someone that you’re thinking of could show up at your door.

You are the rally cheerleader for your group or team. People look to you to support and motivate the group. You are developing the skills needed to become a good leader.

You are very popular and could be involved in multiple athletic activities. The time is ripe to meet someone new that sparks your evolution.

An invitation to a party, event or concert will come your way. It could be a great way to reinvent yourself. You could even be asked to dress up.

Page of Wands as a Person

The Page of Wands represents a child or child-like person. It is a very suitable card for children. As a child or teen, they can be full of non stop energy. They love being around people and are a social bee. They are fearless and love trying new things. They are great organizers and are good at bringing people together. They are born leaders, but are still in the beginning stages. She will learn how to be a good leader in time.

The Page of Wands is good at the initial burst of a new project, but needs help and motivation to help her finish the project. She can be a little scatterbrained at times. Make sure that you aren’t starting many projects at once and not finishing them.

The Page of Wands is very sporty and competitive. They love running around and doing anything that expends energy. They can be very competitive and hate to lose. They especially love sports like soccer and basketball.

My daughter is a typical Page of Wands. I signed her up for archery during summer camp this year. I use to love archery when I went to summer camp. I told her she should try it. She hated it. She said, “But no one won. We just shot the arrows.” I replied, “It’s about concentration. It’s not a competition.” The same thing happened when she tried music. She lamented, “When are we going to compete?” Her teacher and I replied with a similar message, “Music is about creating art. It’s about coming together with other musicians. It’s not a competition.” Needless to say, my daughter is now in swimming and track and field. She thrives in a competitive, active environment.

Pages have to do all the mundane, boring work that is required to be good at something. The Page of Wands gets bored easily, so teaching the Page of Wands to follow through and finish is an imperative. Keep your mind focused on the end result and you’ll do well.

Since they are new to the elements, Pages can represent a student or an apprentice. Page of Wands are usually not academically forward as much as they love exciting new ventures such as rock climbing, drama, and competitive sports. They will put all their time and energy into something they really love, but sometimes ignore academic things that do not excite them.

If the Page of Wands signifies a person who is an adult (over 20), they have a lot to learn. They can be very childlike and self-absorbed. They probably won’t be able to keep a job and have far-fetched fantasies about their qualifications. They will have a hard time holding down a job, never willing to put in the hard work or dedication. They think they know more than they do. This person has a lot of untapped potential and energy. They may need a little motivation to get started in the right direction.

Page of Wands as a Message

The Page of Wands can relay travel and career messages.  The message the Page of Wands brings is one of excitement and passion. Anything you are passionate about might come to you in the form of a message. There is something new brewing. The message maybe surprising and very new.

The message will be delivered quickly usually within a few days to a few weeks. No longer than a month. It could be a sudden flower delivery by your sweetheart, who just got the idea to send you some flowers. It could be sudden message in your inbox about the new work-related device your boss wanted to share with everyone.

As far as the delivery of the message, the Page of Wands wants to show you and talk to you.  They want to stand face-to-face. So whatever message you get, you can expect some kind of face-to-face interaction. They really enjoy talking and want to tell you. But because of advancing technology, a text message, telephone call or any rapid communication can be a Page of Wands message. It’s the quickness and speed of the message that is relevant. They don’t have time to wait! They want you to know it now!

Page of Wands as an Event or Situation

The Page of Wands can also signal the start at an entry level job where you might need to work your way up the ladder.

The Page of Wands can be any project that you feel passionately about and you are at the beginning stages.

Page of Wands in Love

The Page of Wands in love brings fresh vitality, vibrancy and new beginnings. You and your partner maybe traveling to exotic locations and trying new things together.

If the Page of Wands comes up for a new love interest, it may start off quickly and end just a quickly without constant fuel to stir the excitement.

If the Page of Wands comes up for an established relationship, then this relationship has the potential for more, but it is still a little immature. It could be primarily based on sexuality, building a strong foundation in sexual intimacy and passion.

Page of Wands as Feelings

If you are asking about how a romantic interest feels about you, they feel alive, exuberant, excited and want to play an active role in your life. You make them feel like a kid again with fresh new feelings. These feelings maybe short lived and fleeting.

You could feel creatively inspired by a project or by a person. You are feeling brave, bold, daring and gutsy about something.

Page of Wands as an External Influence

The Page of Wands denotes getting a message in person. Someone may want to see you and tell you something in person. This is an external influence because it is outside your control. You are receiving the message, not giving the message.

As something outside your control, but affecting you, the Page of Wands can be about a child.

Page of Wands as on Outcome

If you are in a relationship and asking about pregnancy, the Page of Wands combined with an ace can mean that you will have a child soon.

The Page of Wands Reversed can lack focus. They may go from project to project and could have difficulty finishing their project, but to an excessive, manic degree. The spark that ignites the action can quickly burn out.

Reversed the Page of Wands can be a little brutish. He maybe the playground bully or lunch stealing mean kid. He or she can also throw dramatic temper tantrums when they don’t get their way. The Page of Wands reversed can lead to cheating as well.

Page of Wands and Sun:

b. Being unbridled, passionate and fun helps motivate the efforts.

Page of Wands and Ace of Swords:

a. You get a fantastic idea to write a book.

b. She can talk your ear off.

Page of Wands and Nine of Swords:

a. Dealing with the bratty kids causes stress and anxiety.

Page of Wands and Ace of Cups:

Page of Wands and Ace of Pentacles:

a. Delivering something small, but important like mail or a package.

Page of Wands and Nine of Pentacles:

a. The little girl plays alone in her backyard.

Page of Wands and Page of Pentacles:

a. You enthusiastically make plans for the future project and start working on it immediately.