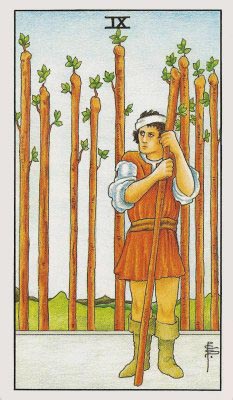 Tarot of the Divine

Nine of Wands Description and Symbolism

A tired and physically bruised man leans against a wand. He stands on a gray platform, which in RWS tarot is called a “stage card.” This indicates that there is a level of play acting, not seeing things as they really are, or pretending to manipulate a situation. Stage cards are not necessarily the most honest bunch of cards.

There are eight other wands lined up behind him. The 4th or 6th wand position has been removed so that the man can hold this wand. He is now the defense. He is now the wall. He looks afraid, nervous, anxious and cautious. But is the head injury merely symbolic for mind games? Are his fears grounded in reality?

Nine of Wands Interpretation and Divination

The Nine of Wands is where you want to give up. You are tired, fed up, and drained. You’ve been going about something in the wrong way and you don’t know what it is. You’ve lost this battle, so you stand guarded and unsure. But that’s just the stage aspect of this card. You can and you will succeed. You need to take a step back and regroup.

You have inner strength and willpower. It is even possible that you didn’t know you had this inner, spiritual strength, but you do. The last obstacle to your battle has to be overcome.

Failure could be imminent as well, especially if you falter. You may need to retreat for a moment and understand why you are failing. Thing have not been going the way you intended them. There is a gap in your fortress and in your mind. You make the same mistakes over again, but don’t know why. You need to go within to see what it is.

Over the years, I’ve given many readings to soldiers and the Nine of Wands usually comes up. It can easily represent someone who is a soldier fighting an unfair war (are any fair?). He is tired and worn out. What he originally thought was a job full of valor and honor has been reduced to fatigue, heartbreak and loss. When a soldier gets this card, they must rethink their interpretation of war and what it really means. There is nothing wrong with retreating.

The Nine of Wands can signal that you have been fighting with someone for a long time. It doesn’t seem to be getting any better either. You are exhausted and tired of the constant bickering.

Nine of Wands in Love

When people say “there aren’t any bad cards in tarot,” they mean cards like the Nine of Wands. Inherently it’s not a good card, but it can be the difference between seeing the glass half full or the glass half empty. Life is a series of learning experiences, not failures.

In love, you probably know a lot about failure. You keep doing the same things, which don’t actually work in your favor. At this point, the Nine of Wands is telling you that you are “bad in love.” Best to figure out why.

If you are in a relationship, it is probably a lot of work. You may be in a co-dependent relationship or a relationship full of unhealthy drama that you thrive on. Your misinformed about what true love is. Love is not a battle. Fighting and having hot makeup sex is not love. Co-obsessions are not love either.

After so many years in one relationship, you might be getting tired of the mind games, the drama and the conflict. One partner could even be ill and you suddenly find it a burden. You don’t know how to fix the other person. You suddenly see cracks all around the relationship because it was never built on anything solid.

You could be very paranoid about your partner. You wonder if they are cheating or they are cheating, so your defenses are up. Maybe it’s an ongoing pattern, so not is the time to step up and ask yourself, “Is this what I want from love?”

It’s okay to retreat from a relationship all together. Spending time alone would be beneficial.

Nine of Wands as Feelings

If you are asking about a love interest then getting the Nine of Wands is not the best card to get. They may be feeling a little bit defensive and guarded about you. They feel like they could get hurt and so they want to build a wall.

Nine of Wands as Advice

Whatever you are doing, keep going, but be cautious. You may have to go about it alone for a while. The focus should be on you for the time being. Take time out to rethink your strategy because whatever you were doing doesn’t seem to be working. The main theme no matter the position: You are missing the mark. Time to figure out what you are doing that is causing an ill-fortunate events.

If you have an actual injury, the time is to rest and relax. Just chill. Don’t worry so much about things you can’t control. Heal so you can continue.

Farmer. Soldier. Historian. Someone who works with their hands. Construction worker.

The Nine of Wands Reversed can signal someone who creates enemies that don’t exist. It takes the upright Nine of Wands to the extremes. This person might even be crazy with schizophrenia, paranoid delusions or some kind of personality disorder.

Havoc can occur when the Nine of Wands appears reversed. The walls of your confinement are easily broken because of lazy and sloppy work. You could create a plan to hurt someone or someone is creating a plan to hurt you because they perceive this person as a threat. The threat is usually because of some delusion of the person who suffers from the reversed Nine of Wands.

Nine of Wands and Emperor:

a. Major discipline is needed to finish your work or task.

Nine of Wands and Two of Swords:

a. Cutting your losses and saying, “no.”

b. Unable to make a decision based on instability.

Nine of Wands and Four of Swords:

a. Failure is imminent if you continue the way you’ve been going. Heal from your injuries before you continue.

Nine of Wands and 7 of Swords:

a. Feeling worn out by sneaky behavior.

Nine of Wands and King of Swords:

a. You may want to call someone with the King of Swords characteristics, but end up not calling because of fear and a desire to keep your emotions in check.

Nine of Wands and Four of Cups:

a. Feeling so worn out from the fight that you reject all other offers.

b. Paranoia leading to rejection.