The Seven of Wands 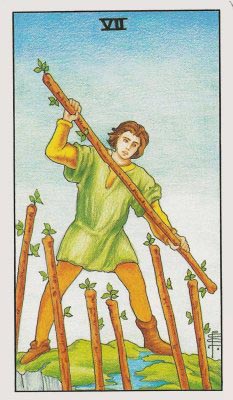 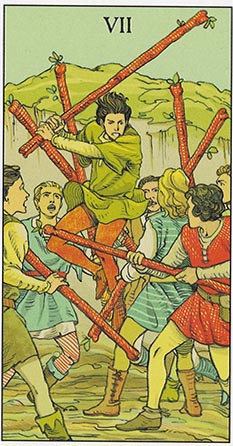 Seven of Wands Description and Symbolism

A man is standing while holding one wand. He is defending himself against six additional wands. In war soldiers are trained to believe the enemy is nameless and faceless. Does this card represent some kind of physical battle or are the other wands just numbers in a business acquisition? We can’t really see who or what is holding up the additional wands. Are these real or imagined foes? Perhaps they have been planted with only the earth holding them up.

Our man is wearing two different shoes suggesting haste or being too busy to realize you’ve put on two different shoes. Another meaning is being so absorbed in fighting that shoes don’t matter. Maybe he cares little for materialism.

He straddles rock terrain with a small creek that is running through him. If he doesn’t balance himself, he might slip and fall into the water.

He looks down upon the other wands symbolizing the “higher ground.” He knows that he is right and will not back down even if he is against all odds.

The Golden Dawn puts the Seven of Wands under the ruler ship of Leo and Mars. Both are fiery elements and combined with wands bring an extra dose of courage, valor and action. There is a lot of passion to Mars in Leo, which fuels his physical body to be in the best shape. He can get his passion out in a good duel, sword fight or wrestling.  Mars in Leo is strong willed, strong minded and strong bodied. He will drive on to the end.

Seven of Wands Interpretation and Divination

The Seven of Wands can indicate you fear everyone being against you. You think your opinion is correct and you won’t budge on it. You are the underdog, the defender. Know your position and master it because you’ll need it to win a victory.

You could be feeling very defensive because everyone is against you. Be mindful that you don’t unnecessarily attack someone. Your feelings maybe more illusion than reality.

The Seven of Wands can also indicate fears that are unfounded. See all those wands? Whose holding them? You may think that everyone is against you, when in reality no one is. You may need to adjust your position and perspective.

You may feel overwhelmed with feelings of being singled out. You’ve reached a plateau and people may want to take you down or fight to get to your position.

You could be trying on different roles. You are bifurcating (as indicated by you straddling the brook.) There are many options and you want to experiment with them all.

Seven of Wands in Love

If you are single, the Seven of Wands can indicate that you have many unwanted admirers. Maybe you do not believe that they are good options. You may wish the keep a wall up and stand your ground while hiding your feelings. You may be very annoyed with someone constantly calling you. Either way, you have many suitors and don’t know which one to pick.

Seven of Wands as Feelings

You might be feeling very defensive because everyone is against you. Be mindful that you don’t unnecessarily attack someone. Your feelings maybe more of an illusion than reality. Someone may have given you an ultimatum that you feel is very unfair. The situation is exhausting to you.

Seven of Wands as Advice

Have the courage even against the odds. Know without a doubt that you can do it on your own. Combine the lion heart of Leo with the Mars Aries logic to come up with the strength of will to persevere. Believe in yourself.

Mars energy of the Seven of Wands brings in levels of warfare and aggression. If you are under attack the best thing to do is try and keep enemy forces at bay. This is a much better approach because qabbalistically the number seven is losing momentum as it descends into the physical world.

Seven of Wands in Career

It could be that you are a sole proprietor with tasks that are mounting and without employees or any help you feel almost under attack. You’ve got to get them done and you will, but you’ll need to keep going and keep fighting.

In business you may be on the brink of defeat, but you can still win. The victory of the 6 of Wands is still fresh in your mind. You’ve worked hard to get where you are today and you will not back down. It may take some more effort, but you are willing to put in the time. Stand your ground and push through. With perseverance, you can win.

Remember that when you are at the top there are always people who will want to bring you down. This card reminds me of the 15th, 16th and 17th century European court. There were always scandals, executions and power plays. Once you were crowned king, it could easily be taken away by your son or cousin. The Seven of Wands reminds you that once you are at the top, there is still a lot of work to do.

Seven of Wands on a Mundane Level

The Seven of Wands can symbolize having a lot of tasks to do and having to do them all alone.

When the Seven of Wands shows up reversed, you should admit defeat at this point and start over. Perhaps a business isn’t going as well as planned. You might need to re think how to operate things. Maybe you are taking on too many tasks and need to hire someone to help you.

The Seven of Wands Reversed indicates that an assessment needs to take place.

Seven of Wands and Emperor:

a. Being hot headed and aggravated.

b. Being determined, focused, brave and fiery.

Seven of Wands and the Wheel of Fortune:

a. fluctuating feelings of defensiveness.

Seven of Wands and Justice:

a. Being up against the odds during the trial.

Seven of Wands and Death:

a. The end of a situation where you felt you were up against the odds.

Seven of Wands and Page of Wands:

a. Too much fire and you can burn out quickly. Having a lot of writing and work to do on an independent project, but  not finishing as much as you needed to.

b. Leaving project unfinished because of the lack of focus.

Seven of Wands and 10 of Swords:

a. Playing the victim or being overly dramatic creates massive amounts of  conflict.

Seven of Wands and King of Swords:

a. You will succeed if you remain calm and logical.

Seven of Wands and 9 of Cups:

a. Someone is being smug about a fight they probably won. They know they were right anyway.