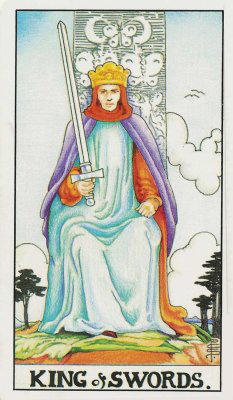 Prince of the Chariots of the Winds

King of Swords Description and Symbolism

The King of Swords sit on top of a mountain. We get this impression because he is posed above the tree line. His view provides a better perspective to situations and gives him a level of distance in order to see all around him. The clouds are at ground level too. The trees are erect and now sturdy. We see the progression of blown trees to upright trees when we get to the King of Swords.

The King of Swords sits at a stony throne with pictures of butterflies. The butterflies represent his metamorphosis and adaptability. In some cultures the butterfly is also a symbol of life and death because of all the transformations that a butterfly goes through. The King of Swords is a man of justice and a man who always discerns with his head and never his heart.

The King of Swords is wearing a blue tunic with orange dress underneath. His cape is purple and the yoke of his crown is red. All these colors support the adaptability symbolism.

King of Swords Interpretation and Divination

The King of Swords in most placements in a reading, suggest using your head over your heart. The King of Swords rules the element of air. Air is assigned mental energies. It’s not the best time to be romantic. Love happens, but not in this reading.

The Kings in tarot represent endings, similar to the pip cards numbered ten. The King of Swords in a reading suggests that you will release an old imagine or idea that you had held on to tightly. For example, you might be dating someone with children. You also have children. You decide that it’s not the right time to date because it’s too emotionally difficult on the children. You make this decision with your head, not your heart.

Another example of letting something go is changing jobs. You first have to understand that this rules the head, not the heart. For example, say you love your job as a free lance illustrator, but you are barely making it. You get a job offer with a large corporation for a graphic designer position. You take that job instead of continuing as a starving artist. You have to wrap your mind around a new idea or identity about yourself. You transition from the free-spirited artist versus corporate artist.

To be very firm, when the King of Swords comes up in a tarot reading the emphasis is using your head and not your heart. There aren’t any emotions involved in this card. It’s like you are just playing a chess game. You don’t get worked up if you win or lose (unless you are my 7-year-old brother, who I never let win because I was 11. He certainly got worked up!)

A lot of times we need the logical portion of our lives to take over. We can’t run around with our hearts on our sleeves all the time. The King of Swords asks you to take a better look at your life. Are you completely living your life with your intuition? If you are, does your life seem stable? The likely hood is that it is probably a mess. The King of Swords in a reading alerts you it is the time to use logic and reason, even if it breaks your heart a little bit. And, it probably won’t. You will be happy to use your head. Like in the starving artist example, he is happy to take the job as a corporate artist. He still gets to continue his art, but gets paid more. All he needs to do is change his bohemian attitude towards art.

King of Swords as a Person

He is a mature man who rules with logic. He doesn’t have to appear superior or arrogant, but likes to appear this way. He is full of mental clarity and ideas. He rules over the air, the realm of the mental.

He can sometimes come off as cold and aloof. He can be loving and friendly, but remains distant and reserved. His posture is usually very straight like the sword he holds.

He is a master of his own emotions and can use them as powerful tools to uphold the law. In fact, he doesn’t delve deep into his own subconscious feelings or dreams. He will always use his mind over his heart in all situations. He’s not one for sappy movies or romance stories. He will swiftly give justice to those he feels deserve it. People follow him because of his power, his fairness, and his high standard of ethics.

He will be the first to go to war if he feels it is necessary and others will follow. People follow him because they know he is the best judge. He’s a General, whereas the King of Wands is the governor.

He is a judge and relishes in fairness. His fairness and ability to see all sides of a situation make him the go-to man for most people, even other kings. He has the ability to foresee the future of a situation, so his decisions will be based on knowing the outcome before it happens. You could say that the King of Swords is ahead of his time.

I’ve read on many accounts that the King of Swords is assigned to the Major Arcana Emperor. I don’t see this connection. The Emperor rules over the physical land even if his astrological correlation is Aries, a fire sign. Using this logic, we could deduce that the Emperor would be associated with the King of Wands, but wands rule spiritual energy. The King of Pentacles rules over the land and all that is physical. Both have what appears to be rams, bulls or cows in their pictures. I encourage you to come up with your own connection.

King of Swords as a Father

He doesn’t put his family first (the King of Cups does this), but he puts ideals and success first. He encourages them to think for themselves. He is not the most sensitive of fathers. He just doesn’t understand whining and temper tantrums. He will often retreat or come back with harsh insults. He can be very cutting to small children, but he always thinks he’s being logical and cool.

As a father he probably thinks about himself above all else. What is good for him, is good for his children would be his motto. He rarely understands his children’s moods, but rest assured, when his children need back up he will help them. He will be the father in the school office fighting for his children and backing them. Indeed, he will probably win because of his amazing power of words and his discernment for justice and fairness.

King of Swords in Love

When you get the King of Swords in a love reading, it usually will indicate that there isn’t any love in the air. (Do you want to date someone who is constantly holding up a sword?)

If the King of Swords is a signifier in the reading (and not the energy of the reading) it will indicate that he needs his intellect aroused more than anything else.

King of Swords as Feelings

The King of Swords doesn’t like feelings. He may have been hurt in love in his younger days and now is cautious about who to love and share his life with. He may have blocked out all feelings all together and only uses his conscious mind to find solutions in love. The King of Swords doesn’t bode well as feelings in a love reading. It indicates that the person doesn’t feel anything at all.

King of Swords as Advice

The King of Swords as advice asks you to think about things logically. Make a fair and honest decision with yourself. All swords represent thoughts and words, so write it down If you are having a dilemma, then try brainstorming your ideas. If you can’t decide between one or the other, then write down the pros and cons. If it’s something you want to get rid of, you can even write it down and burn it.

King of Swords as an Outcome

For a female querent, any King in the outcome position means that you will find another man. In the King of Swords position, it means that you usually choose with logic, reason and resolve. You make a check list in your head and choose to dump your boyfriend or fiancé with utility rather than your heart. It can also denote another man stepping into your life, as court cards often are actual people.

In a general reading, the King of Swords as the outcome cards means that you will have to use a sharp intellect and apply it to the current question or situation. It implies “winning” and finishing the race. Kings are endings. In a legal reading, it suggests that you win the lawsuit.

The King of Swords Reversed is a tyrant. He maybe manipulative and calculating and could even be sociopathic.

He can be outright rude, nosy and abrupt. He may talk the loudest and interrupt people. He doesn’t value other’s thoughts or opinions.

The King of Swords reversed can also indicate a military action from a vile, dictator.

King of Swords and Empress:

a. A cold, logical mother who puts feelings aside.

King of Swords and the Eight of Wands:

King of Swords and the Queen of Wands:

a. No matter how sexually enticing she is, he is going to say, “no” (this particular reading was flanked with other swords cards).

King of Swords and Three of Swords:

King of Swords and Knight of Swords:

a. Rushing towards a situation, problem, new venture with logical clarity and no  emotions.

b. Not being emotional in favor of rapidly escalating a situation.

King of Swords and Ace of Cups:

a. He feels an overflowing of emotions, but wants to put that aside for now.

b. The surgeon injects the product.