The Ten of Wands 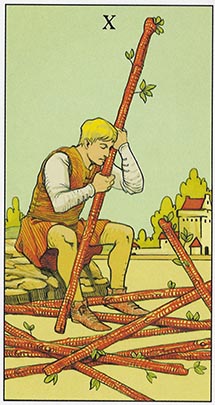 Ten of Wands Description and Symbolism

A farmer is walking, hunchbacked, with an overbearing amount of wands. The wands look fertile and ripe as they all have the same amount of uniformed green leaves. It looks like the culmination of the Suit of Wands has finally reached the harvest period, which should be a good thing, except this man looks as if his back is about to break. Small hunches appear to form from too much manual labor.

His home in the background looks beautiful and spacious. Even though the work is back breaking, he does see the materialistic benefits denoted by his large house, many fields and his green and fertile landscape. But to what avail?

Ten of Wands Interpretation and Divination

The Ten of Wands is the card of single mothers, overworked employees and tremendous effort. You may be in the position of helping an ailing relative full time and the responsibility of it is creating a lot of drain and strain in your own life.

You have a lot of responsibilities and burdens. You struggle to finish, but you will get it done.

The Ten of Wands can indicate a physical move. There are heavy boxes and furniture that you move without help. It is usually a short, residential move (not a move overseas). You will feel relieved and very satisfied when all the boxes and furniture are moved over to your new place. Of course, then you will have to unpack and reorganize everything. Moving is burdensome.

Ten of Wands in Love

You are probably in the dark about what is going on with your partner and would really appreciate if they could let you know. Constantly wondering and guessing is becoming tiresome. You might be thinking about breaking up with your lover because you don’t feel included in their life. Your relationship isn’t bringing you joy anymore.

Ten of Wands as Feelings

If you are asking how someone feels about you or a situation, the Ten of Wands can suggest that they feel the weight of the world on their shoulders when they think about you. They are feeling burdened by emotions and feelings that they can’t get rid of.

Ten of Wands in Career

The Ten of Wands can indicate that your financial situation is strained and you put in a lot of effort for a little payout. Minimum wage jobs are indicated, especially jobs in manual labor industry, restaurant staff, and farming.

Ten of Wands on a Mundane Level

Any type of manual labor such as fence building, construction, gardening, and lifting heavy objects are indicated by the Ten of Wands.

When the Ten of Wands appears in your reading, be careful when lifting heavy objects. Something may look lighter than it is.

The Ten of Wands Reversed can signal a time that is so insurmountable that you feel like you can never escape. You could be so overburdened and taxed that you just give up and walk away.

Ten of Wands and Empress:

a. Doing anything and everything under the sun probably at home or garden.

b. In a relationship reading this could indicate that one partner caters to the other indefinitely. They do everything for the  person and there is nothing they wouldn’t do.

Ten of Wands and Justice:

a. A need to balance out all the backbreaking or exhausting workload.

Ten of Wands and Ace of Wands:

a. Having all the potential to get the work done, but feeling overwhelmed because you do it all on your own.

b. Single parent without any help, but the drive, determination and fire to finish it on her/his own.

Ten of Wands and 10 of Swords:

a. Ending something that causes great spiritual and emotional depravity.

Ten of Wands and 9 of Swords:

a. You are not happy at work and you have no one but yourself to blame (which you do a lot).

b. It’s a nightmare trying to do all the work yourself, but you do it anyway and then cry about it after.

Ten of Wands and Page of Swords:

a. Being defensive all the time can be a burden.

Ten of Wands and 2 of Cups:

a. He (or she) does all the work in that relationship.

Ten of Wands and 5 of Cups:

a. A regretful burden.

b. Moving something heavy only to have it broken.