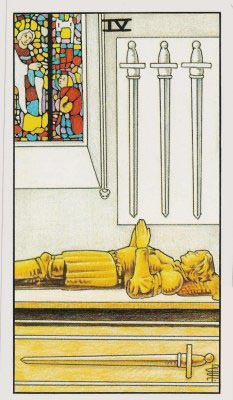 Lord of Rest from Strife

Four of Swords Description and Symbolism

A golden colored statue of a knight lay on top of a coffin. Gold is the color of angels and illumination, suggesting that once he rests, he will have an enlightened moment. His moment of peaceful clarity will come only with seclusion and meditation.

The primary colors in the Four of Swords are gray and gold, except for a color burst found in the stained-glass window in the upper left corner of the effigy. The stained-glass window tells a story of a priest giving a blessing to someone praying. This suggests prayer, meditation and religious enlightenment. It also suggesting being in alignment with the higher self or holy guardian angel or One Divine Will (call it what you will).

Once you are in alignment with your holy guardian angel you can easily attain enlightenment and further your intuitive abilities in order to guide your life in the right direction. The stained-glass reminds us of the Hierophant. The Hierophant is not a conventional priest, he is in alignment with his Holy Guardian angel and therefore has interior hearing. All these suggestions remind us that there are many paths to align yourself with your higher self, yet they all lead to the same destination.

Jupiter in Libra brings mental expansion through the form of meditation and rest. Libra seeks balance and Jupiter brings expansion. We need a time to rest if we are to be inspired by our ideas, organize our thoughts or become divinely enlightened. Jupiter in Libra even suggests the need for a vacation to bring the type of tranquility that will equalize any stress or dis-ease in your life.

Four of Swords Interpretation and Divination

The Four of Swords is reminding you that now is a time to rest. You may want to take a relationship break. It can indicate a relationship or work break. You could also be ensnared in a troublesome mental battle of the wits, only to need the calmness that comes with rest.

The Four of Swords indicate a place of relaxation, contemplation, and meditation. You could find solace in a church, a zen garden or near a special body of water. Where ever you feel relaxed and refreshed.

The Four of Swords is telling you that you can heal and restore yourself by silencing your mind. Life’s battles will continue, but you cannot think of this right now. You remain silent, contemplative and ready to restore and heal yourself until you fight again. This is the peace before the next stage. This is a time to restore yourself before the next fight and to think about all that you are grateful for. You have survived the Three of Swords.

The Four of Swords can also indicate a funeral where the loved one is safe in the afterlife. He or she wants you to know that they are in a good place now and that they love you very much. Please look for supporting cards such as the 10 of Swords, Death, the Tower for this interpretation

The Four of Swords can indicate a time of intense meditation and induced astral experiences. You could have an out-of-body experience, which usually precedes enlightenment. This happens through years of meditation. I have been lucky to experience this in 1999. It took me 7 years of intense meditation. I wasn’t asking to have this experience and I actually didn’t know anything about what an OBE was or what the word enlightenment really meant (it’s very over used and misused in today’s society).

I was meditating like usually, but this time I felt a wave go up through my body and when the wave reached my crown (top of my head) time stopped and I saw stars and galaxies. A tremendous amount of information was downloaded, but the key was that the universe was black and dark and burst forth with an entity called Love, which created light. After I finished downloading the information, my soul floated above my body and I could go anywhere I wanted. I rose above my body, but decided to go back. After all, the reason I am here is to be physical.

The Four of Swords can also indicate a near death experience where you feel out-of-body. For any OBE experience look for supporting cards such as the Hanged Man or the Star.

The Four of Swords is about realigning yourself with high principles. Your higher self needs to meditate and recuperate. Celibacy, time alone and any type of purge can be indicated. Detox might also be a good idea. I enjoy a good detox with healthy shakes and lots of lemon/cucumber water.

Four of Swords in Love

In love, the Four of Swords is foretelling of a time where one or both of you need a break from your relationship. It usually indicates a temporary break. You could be dreaming of the one you love or be connected through the astral plane.

Four of Swords as Feelings

You may feel like taking a break from a relationship. You feel that you need to realign yourself with your higher purpose in life. You are seeking balance and would like to be in touch with the great One Voice teacher that will give you the information that you need to have a better future.

It can also indicate that the person you are asking about doesn’t have feelings for you at this time. There are some cards that aren’t going to give you a direct answer to “How does he/she feel for me?” This is because the person in question does not feel anything toward you. The 4 of Swords as feelings can indicate neutrality.

Four of Swords as Advice

The advice is to relax, sleep, and rejuvenate. The Four of Swords is telling you that balance only rests in your ability to take a break from the havoc. The number four is the number of stability, order, and reason, yet it is in the quality of air. You need mental recuperation. You need adjustments (libra in Jupiter) before you can mentally advance. It might even suggest that you need a longer than necessary break from daily life. A vacation where you do nothing but read fiction books on the beach might be in order. Sleep is where our subconscious minds process the day. Allow yourself the sleep you need.

Four of Swords as an Obstacle

As an obstacle or the crossing card in a Celtic Cross Spread, the Four of Swords is indicating that you do not have the needed time for rest and recuperation. You try to get things done, but the work ends up being sloppy, lazy and not done professionally. There is lack in the performance department. You might be running on a lack of sleep, which would cause the lack of perfection. Visit the advice of the Four of Swords to balance the obstacle.

Four of Swords as an Action

The Four of Swords does not indicate an action. In fact, if you get this in the action part of a spread, you will probably experience a period of physical inaction. If you are asking what your romantic love interests action will be the Four of Swords is telling you that he/she is resting, contemplating and thinking about things. He or she may not take a direct physical action towards you at this time.

Four of Swords in Health

The Four of Swords indicates that this is an excellent time to recuperate from an operation, to heal from old wounds, and to restore health and balance.

The Four of Swords can indicate comas and ICU. You or a loved one could possibly be in the hospital hooked up to machines that are keeping you (or them) alive.

Four of Swords and High Priestess:

a. In silence, there is wisdom.

b. When in need of knowledge, it is better to listen than speak.

Four of Swords and Tower:

a. Death and a funeral.

Four of Swords and World:

a. Near death experience. Slim recovery.

b. Having a mental, possibly legal, battle with someone that is over. Having one last thing to you, you rest before the finale.

Four of Swords and Three of Swords:

a. Recovering from a heartbreak.

b. Recovering from surgery.

Four of Swords and Six of Swords:

a. Taking a time out from a situation with a needed vacation.

Four of Swords and Six of Cups:

a. Relaxing with the kids. OR  b. Taking a break from the kids.

Four of Swords and Knight of Cups:

a. Avoiding invitations and proposals in favor of spending the day relaxing. The Knight of Cups may also indicate pools, beaches and sunny hot places.