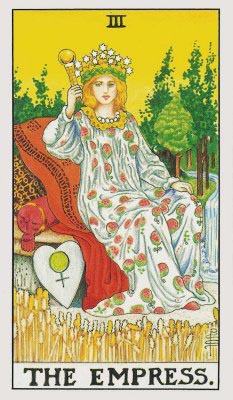 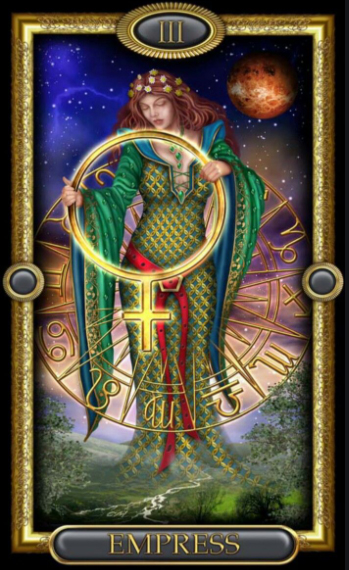 Daughter of the Mighty Ones

Revelation 12:1 “Then a great and mysterious sight appeared in the sky. There was a woman, whose dress was the sun and who had the moon under her feet and a crown of twelve stars on her head. She was soon to give birth to a son who will rule over all the nations….”

The Empress is behind a yellow background. Yellow is the color of energy, creation and vitality. It symbolizes radiant, vibrant energy, which brings forth all life; the breath of the world. The sun is a yellow, glowing orb of energy and without it nothing on Earth can flourish. It is a nourishing aspect of consciousness that the Empress uses to create, heal and grow all her plants, children and everything else under the Sun and stars. The green color of her vegetation is a product of the sun. When we eat vegetables and fruits, we are eating the sun’s radiant life force. The color associated with the Empress is green. Green is the color of the heart chakra, so it’s no wonder that the Empress governs matters related to the heart through her assignment to the planet Venus.

She has twelve stars in her hair and a myrtle wreath as a crown. Myrtle is a sacred plant to Venus, the planet the Empress rules over. There are twelve zodiac signs and twelve months of the year. This signals that she is the great mother to everyone, since she encompasses the entire zodiac. There are also twelve chakras or “stars”. We have seven interior chakras and five exterior. The number twelve is not insignificant in the least. If we add 1 +2 = 3, and three is the number that represents the Empress. We can also look at the number 12 as a whole. Does the Hanged Man look as if he is hanging from an umbilical cord?

There is a forest behind her, which is lush, green and fertile.  In the forest, there is a stream or waterfall, which flows towards her. This is the same stream that flows through the entire Major Arcana, which starts at the sea behind the High Priestess and ends in the ocean of Judgement.

This lush garden depicts abundance and fertile. The trees are evergreen and cypress. Cypress trees are related to Venus. The evergreen trees show us that even in the dead of winter, we are still alive with new ideas and creative imagination. We should also be aware of the rhythm to nature’s beauty and so we need to take care what seeds we plant in our own gardens, whether they are in your mind or an actual garden. Our thoughts are like seeds, ready to grow and sprout off into new ideas, actions, and material goods.

Wheat grows at her feet. The Empress is a representation of Demeter the Greek goddess of wheat and grain. According to Greek legend when Persephone, Demeter’s daughter, was kidnapped by Hades, the God of the Underworld, Demeter was so sad that the land went barren. Zeus saw that all of humanity might die from eternal winter and starvation, so he ordered Hades to give back Persephone.

It was forbidden to eat anything in hell, for if you did you might never return. Hades was a clever and a manipulative man and convinced Persephone to eat a few pomegranate seeds before she left the underworld. When Persephone arrived back to Earth, Demeter was overwhelmed with happiness and restored the plentiful and fruitful land, but when she found out that Persephone had eaten the three pomegranate seeds, she knew that Persephone would have to go back. Luckily, Persephone had only eaten three seeds, so she only had to spend three months out of the year with Hades. According to the Greek myths, that is why we have three months of winter.

Her gown is adorned with pomegranates for her daughter.

She wears pearls around her neck. Pearls are widely known to symbolize purity, beauty, and spiritual wisdom. They are also sacred to Venus. Pearls have a special kind of energy that mixes with the energetic fluid nature of your own body. When we wear pearls around our throat chakra, we can tune into these subtle and sacred vibrations that govern Venus, the sea, and life. A pearl is the essences of life fulfilled. It is radiant light energy that grows from an oyster’s body. The oyster is the womb and the pearl the baby.

The sign of Venus and woman, which is a circle attached to a cross, are on the heart that props up her seat and behind her on one of the blankets.

Her seat looks inviting and comfortable. Lush red fabrics are draped over it and a soft pillow helps support her back.

She is the ultimate mother. She is kind, nurturing and loving. She is the place where all life comes from: babies, butterflies, grasses, birds, anything that is of the Earth. She rules the Earth and all that the Earth encompasses in the physical reality.  She can nurture your ideas too.

People may start seeing you as beautiful and caring. They want to be around you and seek advice from you. The Empress doesn’t hold secret knowledge. She wants her children, friends or subjects to grow and prosper. She is prosperous herself. She is the embodiment of all the Queens.

The Empress keeps a garden and it grows fruitful and abundantly. On the other hand, it has a tendency to become overgrown, which is why she works so well with her husband the Emperor. All plants and animals love her because she is so nurturing, calm and patient. Children and animals know inherently that she is full of love and they are drawn to her. If you have the Empress inside of you, children will always smile at you and babies will stare. Anyone who is innocent and pure will be drawn to you. Cats may even jump into your arms. Dogs will always run up to you. The Empress can telepathically communicate with animals.

The Empress gives life, but she doesn’t always have to give birth to children. She can give life to ideas, words, businesses, or anything else that has the potential for growth.

She doesn’t rush. She knows that everything good in life needs time to cultivate. Babies, plants, flowers…Time is on her side. Her garden is eternal.

But the Empress needs the structure of the Emperor. If left without an Emperor the Empress’s garden can overflow and weeds will strangle the beautiful flowers. Flies and unruly insects will be drawn to the chaos. The Empress has a hard time hurting anything. She is the type of woman who will let insects roam her kitchen because she won’t kill them. She sees the beauty in weeds such as dandelions (Well, aren’t dandelions pretty!).

The Empress can also represent a woman who is highly sexual and sensual. She can also represent the bombshell or trophy wife. This might be the reversed or the obstacle of the Empress. Each card has a negative side to it. It is up to us how we can transform our obstacles into strengths.

She might love fashion and dressing up. Her wardrobe is full of lush fabrics, soft silks, and interesting jewelry. She loves makeup and may see it as an art form rather than a mask.

The Empress can indicate pregnancy, so if you don’t want to become pregnant, be careful.

Do you have a good relationship with your mother? Do you want to be a better mother? Or do you yearn to have a family and become a stay-at-home mom? Are you feeling like a day at the spa? Do you love to bathe in luxurious soaps and fragrances? Then this is your card!

The Empress in Love

Someone thinks you are beautiful! They are drawn to you like no other. You may nurture and dote on your lover or husband (or vice versus). The Empress type is a good listener.

If you get the Empress when asking how your lover or potential lover feels about you, they definitely feel like taking care of you, nurturing you, and romancing you.

The Empress bodes well in a love reading!

The Empress as Feelings

You may be feeling very warm and nurturing. You feel beautiful or you feel that someone is beautiful. You feel fertile, lush and warm. You may feel that now is the time to make your imaginative musing into reality, so you create them all and nurture them into manifestation.

If you are asking about how someone feels about you, then they feel that you are warm, open, loving and kind. They have kind feelings towards you and motherly feelings as well.

The Empress as Advice

The Empress advises you to use your creative intelligence to think about a situation. The Empress is the goddess of creation and the only way to create something is to envision it first. For example, if you want a more organized home you should create a visual image in your mind first. See the way you want everything to look before you tackle the project. This is the key to creating and manifesting what you want in life. See it first in your mind, impress it on your consciousness until it becomes an inseparable part of your subconscious.

The Empress as an Obstacle

The Empress as an obstacle might be suggesting that you need to prune your garden. Your mind might be over run with negative thoughts, leading to the inability to get anything finished.

The Empress in a Career

Your business will grow and thrive if you are patient and thoughtful about it. This is a very good sign. Your business is most likely at the beginning stages of development. It needs time to grow before it is developed. For example, you could be developing a website right now, which isn’t ready to launch. You’ll need the patience to develop it. Or you could be starting a program in school and you’ll need to keep working hard to finish.

A bad mother who has let everything run over into a mess. She may either smother her children to death or baby them so that they remain helpless. She may manipulate and be jealous. It indicates a mother whose intentions are good, but the execution is poor. She maybe the mother who never allows anyone else to watch her children, therefore neglecting her husband’s needs.

The Empress reversed also indicates promiscuity. She can be the trophy wife, a prostitute or someone’s mistress. Sexuality is a valuable tool that should never be expended in a negative way. Be careful who you share your sexual energy with.

a. You are going through life’s cyclical changes. Something has to die, for something else to be born.

a. He thinks your the one. Or perhaps you are thinking about a career as a movie star.

Empress and 4 of Wands:

a. The wedding planner is puts the finishing touch on the wedding details

b. He’s going to marry the woman he wants to have children with

Empress and the Ten of Wands:

a. These combinations with the Empress can indicate pregnancy.

Empress and 3 of Cups:

Empress and the 10 of Cups:

b. Your mother loves doting on you

c. He loves you enough to see a family in your eyes.

Reversed Empress and Reversed 6 of Swords:

a. She smothers her children and ignores her husband.

b. “No one can watch my children but me!”