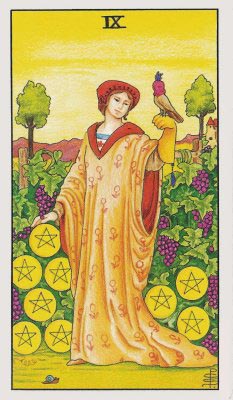 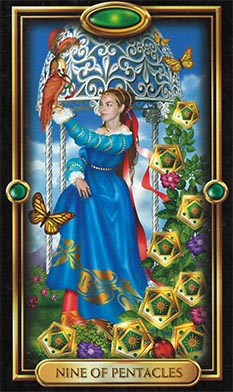 Yes or No Question: Yes

Nine of Pentacles Description and Symbolism

A woman in a lush and fruitful garden is holding a falcon. She is wearing a rich looking red and orange robe with the flowers that resemble an ankh. This is the same symbol we saw with the Empress.  It represents eternal life, immortality and is symbolic of the fertile grounds that she has cultivated. The planet Venus, which both the Empress and the woman in the Nine of Pentacles are ruled under is shaped just like the symbol on her dress.

She is walking in what appears to be a wine vineyard. We have to wonder how she could afford such luxury. Did she inherit this world? Work for it? Some say she appears trapped in a gilded cage. However she got there, she alone cultivates the land and works to keep the crops thriving.

There are mountains in the background, which we learned from the Emperor, indicate hard work, stamina and resolution. Mountains in tarot also symbolize mathematical proportions to life and fractals, which is also why there is a snail in her garden. The life she is leading is a constant.  No one can take that from her. She is not just blindly walking around in a garden of abundance. She is the garden.

Her only companions are a falcon and a snail. Falcons were primarily used to hunt small birds and animals for their owners. It took time and dedication to train the falcon, so we get the sense again that she is steady and disciplined. Furthermore, only the wealthy could generally own falcons. Female falcons are bigger than the males, so they are usually used in falconry, which highlights the feminine nature of the Nine of Pentacles.

Her other symbolic companion, the snail is moving along at its own pace. With determination and against the odds of time, the snail will get to his destination. Like her, the snail is patient. Snails are attracted to moist rain water, so they come out of their shells and move along when it rains. The mathematical component to the nautical shell on the snails back was revered by the ancient Mayans. It became known as the Golden Mean and the sequence of numbers that makes the shell is known as Fibonacci sequence.

In her wine vineyard she has all the necessities to live without ever leaving. She has fruit from the grapes, wine from the grapes, a falcon to fetch meat and a snail which symbolizes water.

The background is yellow, which is the same for the Page of Pentacles, Knight of Pentacles, Queen of Pentacles, and the King of Pentacles. Yellow indicates head over heart, logically acquisitions, and providing warm environments for growth. Yellow is also an intelligent color. The sun is yellow, which makes crops grow and life thrive. It is the steadiness of the constant sun that keeps everything moving forward. The pentacles are those constants too and they speak of the slow, steady thriving effort they all take day after day.

Nine of Pentacles Interpretation and Divination

The Nine of Pentacles can indicate a solid financial future. Possible inheritance and/or hard work are suggested. Whatever she has is very stable. She has comfort and abundance. She is most likely a savvy business owner.

The Nine of Pentacles suggests that you are in the process of developing self-worth and self-discipline. This will ensure that you will never lose your wealth. Balance the material with the spiritual and you will see the completion of the nines. Spiritual completion is grounded in material abundance. Because without a stable place, especially within a natural world, you would not be free to work on your spiritual mission. Stuck working like the man in the Eight of Pentacles, you cannot devote anytime to spiritual development. The two need to be balanced.

Nine of Pentacles in Love

The woman in the Nine of Pentacles knows that love comes within yourself and all around you. She understands the difference between object-oriented love (commonly called lust) and true love for everything around her. She loves her garden, her body, her bird and the snail. She understands them all and is filled with compassion for everything around her. She is in touch with the natural world. She is radiating from a place of love. This is the way she can attract people that will truly love her, for her.

The Nine of Pentacles suggests that you or someone you know is a woman that doesn’t need a man to fulfill any sense of self. This card bodes well for retired women as well as divorced women who would rather keep their relationships out of their house. For instance, the Nine of Pentacles could denote a woman whose children are grown and who now lives alone. She may date occasionally, but is not looking for a man to co-habitat with. After years of children and husband dependency, she is living an independent, self-sufficient lifestyle.

Nine of Pentacles as Feelings

Someone thinks you have it all! They may be feeling secure, safe and very comfortable around you.

They may also think that you are out of their league. Thinking this will lead to feelings of intrigue, but a distance will be kept.

Nine of Pentacles as Advice

Work hard and be diligent. You can turn your grapes into wine! When you organize your thoughts and your house will lead to a clearer future.

You might get an unexpected package, letter or phone call soon.

Nine of Pentacles as a Strength

Draw on the strengths from your surroundings, which are most likely beautiful. At least, you see the beauty in it. You are strong and independent. Organize your beautiful life and you’ll have the keys to success. Venus in Virgo.

Nine of Pentacles as an Outcome

Your money will increase or you’ll find that a partnership ends with you as the sole benefactor.

The Reversed Nine of Pentacles can sometimes indicate a kept woman who amuses her lover once a week, but who lives in a sort of gilded cage.

It could also indicate a trust fund baby who doesn’t know anything else other than spending all day luxuriously being idle. They may not get any work done, but would rather lounge around eating bonbons. Sounds like a nice life!

The Reversed Nine of Pentacles can sometimes indicate that you have a weight gain tendency due to sumptuous wine and delectable cakes.

Nine of Pentacles and Hermit:
a. Studying in luxurious surroundings. Most likely solitary.

Nine of Pentacles and the Devil:
a. Being trapped in a gilded cage. From the looks of the 9 of Pentacles, it’s a pretty nice place to be trapped, but you are trapped, nevertheless.

Nine of Pentacles and Four of Wands:
a. The affluent woman entertains at home.
b. She loves to stay at home and clean the house. She decorates so well.

Nine of Pentacles and Six of Swords:
a. Traveling to a vineyard to taste wine.

Nine of Pentacles and Ten of Swords:
a. Being unbelievably tired while lounging around at home.
b. Having no energy to do all the work required at home.

Nine of Pentacles and Ace of Swords:
a. The independent lady is thinking about cutting it (him/her/them) loose because she (he) knows she’s (he’s) right.

Nine of Pentacles, Ace of Swords and Two of Pentacles:
a. The two highly independent people fight over whose going to be right.

Nine of Pentacles and Eight of Pentacles:
a. She works hard to have it all and she deserves it.
b. Repetition is the key to having it all.
c. Hard work is the only way up.

Nine of Pentacles and Page of Pentacles:
a. Business acumen comes easy for you. While you lay the ground work, it will work for you.
b. You have a fertile ground for starting a new project.