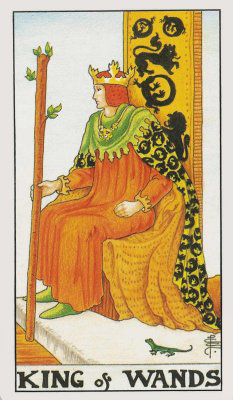 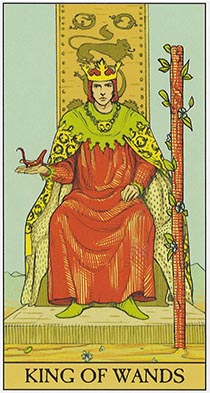 Relates to the Magician.

Prince of the Chariot of Fire

King of Wands Description and Symbolism

The King of Wands sits on his throne about ready to get up. He looks as if we just caught the picture during an action pose. The throne is not stony, but yellowish-orange in color. It looks like it could be leather. Black salamanders eating their tails and lions adorn the headrest of his throne. The salamanders are in both the Page of Wands and the Knight of Wands as well. The only exception is that the salamander’s tail is more open on the others. The closed circle in the King of Wands indicates completion. Salamanders represent the “dark night of the soul,” because they have a fiery cool breath that can put out fire. In medieval art, salamanders represent faith conquering unbridled passion, since these creatures can supposedly live in hell and yet triumph. They are the modern day dragon.

All kings indicate a completion of the suit they encompass.

The King of Wands is the embodiment of Suit of Fire. No longer a page, nor a knight, he has earned the title King of Wands. He is fiery, strong and capable. He is a man of action and very athletic. He gets people motivated and keeps the fire going.

The King of Wands wears an orange dressing gown. His cape is green and yellow with black salamanders all over it. Reds, oranges and yellows tend to be exciting, animated and lively. The green adds a tone of fertility and lushness that is lacking in the Queen of Wands. The fire breathes to life the green salamander and keeps everything balanced.

King of Wands Interpretation and Divination

When you get the King of Wands in a reading, you are feeling enthusiastic, adventurous and ambitious. You might be traveling somewhere, training for a marathon, or making romantic plans with your spouse. There is an absolute air of confidence around your life or the situation.

You are carefully planning a project that you are heading. People look to you for guidance and wisdom. You will make this project very successful with your gumption and drive. You are in an ambitious phase of your life and it shows!

You are networking lately to build a stronger base. This could mean you are throwing parties, joining groups or forming organizations that help connect people together. The suit of wands are athletic, so you could be coaching little league or forming an adult volleyball team. Teamwork is highlighted, but you are probably in a position of power. If the King of Wands doesn’t represent you, then you will meet someone who is mesmerizing and group oriented.

The King of Wands is the busiest of kings, so you will be getting a lot of emails, phone calls or zoom calls lately. You might even get a call from a love interest that you’ve been hoping will call you. The King of Wands in a love reading is usually very good. It indicates that the person you are thinking about is already around you.

Kings are primarily about completion and releasing. According to Gail Fairfield, The King of Wands is releasing an old image that doesn’t serve him anymore (Fairfield, 76).

King of Wands as a Person

The King of Wands is very down to earth. He can be a simple man, who does without grand luxuries. He has a high energy level, which plays out through sports and physical fitness.

He has high ethics and morals. A persistent and motivated man, when he wants something he will go after it even to his own detriment.  Think of him as the team cheerleader motivating others through his stamina and energy. Everyone loves him. He is a people person.

The King of Wands is a go-getter. He is active and always doing. He is the ring leader, the one who organizes and manages everyone else. His vivacious energy gets other people motivated.

He is very focused and driven to succeed and always be his best. He can be very goal oriented. At times he is prone to tunnel vision. His quick decision making sometimes gets him in a pickle, but the King of Wands fixes and rides dilemma with ease.

I got this card once to describe a short, red headed arms dealer from Australia. My client would meet this man and the man would inspire him to get out of retirement by taking a few jobs selling arms. The King of Wands can really have any type of job just as long as he is the ring leader and the man who motivates others.

King of Wands as a Father

He may never see fault in his children. He never sees his children as “unfixable”. If he encounters a problem with one of them, he simply finds a new way to motivate them or inspire them.

He fully expects his family to go on whatever mission or idea he has going. If they don’t follow him, he can be domineering because he feels like he is always right.

He’s fully athletic and fun to take to sporting events. He’s definitely the father who coaches the kid’s basketball, football or soccer games. He’s the fun dad who all the kids wish were their dad.

The King of Wands may run a bad temper, especially when reversed. He maybe very protective of his teenage daughters. I got this card once for a woman whose father would follow her on her dates as a teenager. He would just show up and say something like, “Oh. I was just shopping here too.”

King of Wands in Love

When the King of Wands appears in your love reading, an intense romantic relationship is on the forefront. You will be actively pursued by this man. He is very charismatic.

King of Wands as Feelings

The King of Wands feels very passionate and fiery. That fire and passion is a torch you can take with you to lead the way. This card can also represent a sexually feeling.

King of Wands as Advice

The King of Wands is advising you to release old beliefs you have. You’ve probably just completed one stage of a project and want to move on to the next stage. It is a good time to finish things up and move forward. In a romantic context, this could be going from dating to marriage.

The King of Wands also encourages you to have fun, be light hearted and kind.

The King of Wands reversed is an emotional cry baby. He’s immature and self entitled. He may want all the rewards without any work. He may be prone to lazy days loafing off other people. Reversed this King is a drama queen, similar to the King of Cups, but less alcoholic. He could be an uptight, maniacal man who enacts revenge haphazardly.

King of Wands and 5 of Wands:

a. He coaches the kids lacrosse (or any sport) with vigor and  enthusiasm.

King of Wands and the 6 of Wands:

a. Feeling burnt out by all the activities.

King of Wands and 8 of Wands:

a. You have the energy to get everything on your to do list done.

King of Wands and 9 of Swords:

a. A person with the King of Wands characteristics maybe causing your anxiety and  stress.

b. Staying up all night with relentless energy.

c. Having an obsessive need to clean.

King of Wands and Knight of Swords:

King of Wands and 2 of Cups:

a. You maybe feeling an intense connection with someone who has characteristics of the King of Wands.