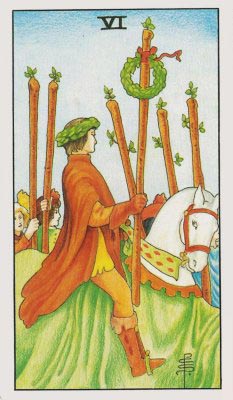 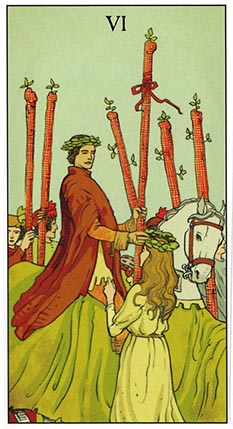 Six of Wands Description and Symbolism

Exoterically, his white horse is symbolic of purity and virtue. White horses pop up in fairy tales, conjuring ideas about knights in shining armor. Perhaps a knight on a quest who is honoring the age-old system of questing for fame, glory and the crown. The main and usually ‘pure’ character on screen is usually the one who is riding a white horse. The shadow side of this is found esoterically….

Esoterically, white horses represent the cyclic journey of life and death. More clarification can be made when compared the Six of Wands with RWS Death card. Anything exoteric requires each individual to look beyond superficial meaning and meditate on a deeper meaning from subconscious clues that are embedded deep within our culture and yet, outside of it too.

The horse is covered with an exaggerated green blanket, so that only the horse’s head is visible. There is an element of excess and extravagance due to the all-encompassing blanket. This might be a subtle warning not to be so prideful and look at the situation clearly.

The Six of Wands has a dual meaning. The hero riding on the white horse cannot be a hero without the adoration from the crowd. If there isn’t a crowd, then he’s just a simple man on a horse.  Which one are you? Are you the person on the horse or are you one of the people in the crowd?

Six of Wands Interpretation and Divination

The Six of Wands signals victory. So if you are anxious about a court proceeding or want to win your lovers heart, know that you will be victorious.

The Six of Wands can indicate any kind of celebrations. You maybe a part of graduation parties and commencement celebrations.

The Six of Wands can indicate that you will be receiving a reward for good work that you have done.

The Six of Wands can make you feel really good about yourself. You may feel as if you have a lot of support from everyone around you. On the other hand, you could adore someone else where by adoring them makes you feel amazing.

Six of Wands in Love

The Six of Wands suggests that you may need someone that boosts your ego, while the other person is perfectly find doing the boosting and admirations. This is the fire of balance. You feed off each other energetically.

When the Six of Wands comes up in a love reading, you can expect a lot of sexual energy. There is passion and long nights spent in bed.

If you are asking about a romantic love interest, they really like you! You will soon have them as your own. The Six of Wands assures a victory.

Six of Wands as Feelings

You are feeling really, really good about yourself or someone! Everything is energetically charged with passion and adoration. You feel alive and on top of the world. If you are asking about what someone feels towards you, then the Six of Wands says that they really adore you and think you are really amazing.

Six of Wands as Advice

If you’ve been wanting to take a break from work, this is a good time to do so. Find something pleasurable, so you can unwind and enjoy yourself. Take comfort in knowing that everything is on course. Time to nurse yourself back to good health.

The Six of Wands reversed suggests that there is a Trojan Horse effect. You maybe resting on your laurels when out of no where you lose your footing and are attacked. Be careful when the Six of Wands shows up reversed, it is a hollow victory, which warns of having a great distance to fall. Don’t get to prideful.

The Six of Wands reversed can foretell of sexual victors where there are conquests involved. If you don’t want a purely sexual relationship run the other way.

6 of Wands and Justice:

6 of Wands and the Star:

a. He thinks she is like a star, shinning on him all the time. She is the perfect person to him.

b. Someone gets conquered by love.

c. She puts him on a pedestal.

d. He puts her on a pedestal.

e. He/she has been after him/her for a long time and finally is victorious.

f. They have hot sex together.

g. The sex is like the stars. It’s ecstasy.

h. Their love is written in the stars. It was meant to be.

i. All good things come to those who wait.

j. They love each other just as they are. It’s unconditional love.

6 of Wands and World

a. Awards and accolades.

b. When everyone adores you, you feel complete.

a. She gets what she wants: a happy home

b. They have the perfect family balance where everyone loves the patriarch and he loves them.

6 of Wands and 4 of Pentacles

a. You make his ego feel so good without him doing one thing in return.

b. Withholding his love makes him feel like a powerful victor.

6 of Wands and King of Pentacles:

a. He puts you on a pedestal. You win. His heart is yours.