The Two of Cups 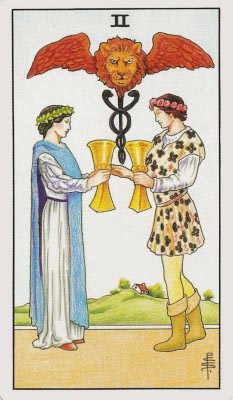 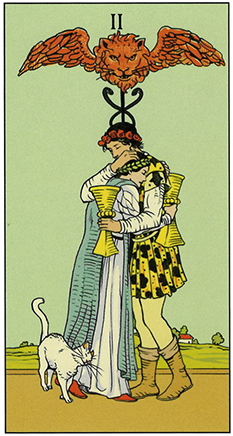 Two of Cups Description and Symbolism

A man and a woman are holding open cups while the man reaches out the the woman. They are both intently gazing in each others eyes. The woman wears a laurel wreath in her hair, while the man wears red roses. Their love is victorious. In between them is the caduceus with a winged head of a lion above it. The caduceus is an ancient symbol that is used in our modern age to promote health. To the Ancient Greeks, the two snakes spiraling together represented commerce and an exchange.

Another avenue of thought is that the two snakes intertwining represents kundalini energy, which has a masculine and feminine part. When these two parts are combined together we have a whole piece, which, in the Two of Cups, would represent the couple.

The lion is a symbol of strength and sexual passion. In alchemy the red lion represents sulphur. Elementally and alchemically, sulphur is a combination of air and water, so that we have the masculine conscious mind and the subconscious feminine mind coming together as One. Sulphur represents the One Will brought under control by the Higher Self. It is the soul.

Alchemically this lion is very important. There are three lions. The Green Lion, the Red Lion and the Old Lion. The green lion is the naive lion of mass consciousness, not aware of it’s true nature. The Red Lion is the lion who becomes aware of the magical world that is dominant in him or herself and the entire world. The Old Lion is the master sage who understands that everything is really One thing.

Here, in the Two of Cups we have the Red Lion, spirally up through the force of kundalini. The two people in the picture brought it out together. They work in harmony with each other to obtain a higher goal. Why work in opposition, when you can come together and form a better unit?

In the distance we see green rolling pastures with a tiny quaint house. Our home is where our heart is, but the distance between the couple and the house suggests that this relationship is in the early stages.

The association between Venus in Cancer is probably one of the more easier correlations. Someone who has their Venus in Cancer bonds quickly and for life. They want to find the right person and settle down. Venus in Cancer is very romantic, attentive and sensitive. But like the Chariot, which rules over Cancer, they can be protective of their heart and take their time in getting to know their partner. So take your time in getting to know your new love interest. Observe, watch and be mindful of seeing through appearances.

Taurus rules over the planet Venus. Cancerians find great comfort in the stability that Taurus provides. Venus is also the planet that is ruled by the Empress. We can see the expression of the Empress, who is a representation of Hathor, Demeter and Aphrodite, the ancient Goddesses of love and fertility.

Two of Cups Interpretation and Divination

The Two of Cups can indicate a new romance or friendship, but remember like all new relationships this one will have to be nurtured. It’s the beginning. Anything can happen next.

Two of Cups as a Person

A Two of Cups kind of person is someone who has a natural healing ability and a good person to talk with because they are such a good listener, but they always want reciprocity. Make sure you listen as much as you talk because Venus in Cancer is very sensitive.

Two of Cups in Love

The Two of Cups indicates that “just a little romance” might be in store for you. It’s the beginning stages of a romance. In order for the Two of Cups to indicate that you have a solid future together you’ll need surrounding cards such as Ten of Pentacles, Ten of Cups or Four of Wands.

You may meet someone that you click with. You’ll enjoy their company and may want to take it to another level. A kiss might be in store for you!

Two of Cups as Feelings

You’ve probably got the love bug if you get the Two of Cups as feelings. Someone (or yourself) is feeling very much in love. You definitely feel a connection to someone. It can even indicate that you have a level of telepathic insight into another person.

Two of Cups as Advice

The healing power of love is transcendent. How does it work so well? The Two of Cups as advice is asking you to heal yourself. It can be through love or some actual therapy. You can draw your own healing power into your life through gentle guided meditations or your own personal rituals.

If you have a broken heart, the best way to move on is with self love. Do the things that you love and make sure you are living in the moment. Look at the sky and its beauty. Make a point of filling yourself with that moment of just you and the sky.

Two of Cups as an Outcome

Everyone loves to see the Two of Cups in the outcome position of a tarot reading. It’s a picturesque image of romance. The couple are both looking lovingly at each other, while the gentleman reaches out to touch the woman’s hand.

If you get the Two of Cups as the outcome to a budding romance, then the romance will blossom in the next couple of months. You’ll probably be spending many hours together talking all night, taking long walks and sharing your devoted time together. There will be an opportunity for you to take the Two of Cups and turn it into something deeper.

If you are asking about an existing relationship and the Two of Cups pops up as the outcome, it may look like your romance won’t go beyond the initial stages of dating. I mention the word “stage” because the Two of Cups is a “stage card.” There are several more stage cards in the RWS deck. These indicate that things are put on as an act and all is not what it seems.

These are the heady, romantic times when puppy love fills your heart and you fail to see anything negative about your partner. You love the way they look and can feel the chemistry together. But like most early romances, it has to be able to stand the test of time. So the stage is set for you to be on your best behavior and dress your best.

Outcome in business the Two of Cups suggests the signing of contracts going smoothly.

Two of Cups in Business

The Two of Cups can indicate that two people are coming together with mutual interests. Signing of contracts is fulfilled.

Two of Cups and Judgement:

a. A long distance telephone conversation with someone who            love. Could be parents or a sibling. Relatives are suggested.

Two of Cups and Nine of Cups:

a. Being very, very satisfied with your lover/boyfriend/girlfriend/spouse.

Two of Cups and Page of Cups:

a. Beginning of a new love affair

b. A message from your lover.

c. Daydreaming about the one you love.

Two of Cups and Queen of Cups:

a. Connecting and chatting with a person who has the Queen of Cups personality.

b. A very romantic woman who is often reciprocated in love.

Two of Cups and Two of Pentacles:

Two of Cups and Four of Pentacles:

a. Being possessive in love.

Two of Cups and Page of Pentacles with the Fool:

a. Taking a walk through the woods with someone you connect with.

Two of Cups and Page of Pentacles:

a. News from a person you connect with. The news will probably be written in a text, email or snail mail.

Two of Cups and King of Pentacles:

Two of Cups with lots of pentacles:

a. could indicate new business partnerships.